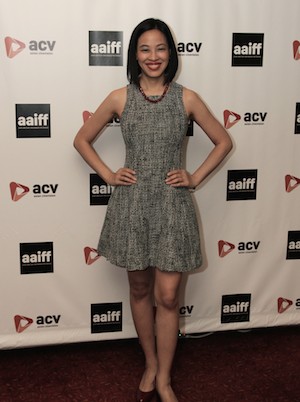 Lia Chang with her portraits of New York Chinatown after 9/11 display in the Asian Division Reading Room of the Library of Congress in the Thomas Jefferson Building in Washington D.C. on September 10, 2011. Photo by Reme Grefalda

Lia Chang with her “In Rehearsal” display of photographs drawn from the Lia Chang Theater Portfolio, on view in the Asian Division Reading Room of the Library of Congress on July 27, 2011 in Washington D.C. Photo by Lia Chang

“Asian Americans: At Home in the Galaxy”
2001: West Charleston Library, Las Vegas, NV
This multi-component exhibition includes Notable Asian Americans who have broken boundaries and have carved unique paths to success in their specialized fields, as well as ordinary women and men of diverse Asian/Pacific ancestry, working in a variety of fields and occupations. The third component of the exhibition is a fabric book art installation piece called “Coming to America” which details her grandmother’s experience of being detained at the Angel Island Immigration Station. The fourth component includes Chang’s fine arts images of dancers and her nature, food and travel images taken during her adventures in Paris, London, Italy, Seattle and Hawaii.

Artist Lia Chang with her Art Installation about her grandmother’s experience of the Angel Island Immigration Station.