Congratulations to Qui Nguyen, whose new play Vietgone, is the winner of the 2015 Harold and Mimi Steinberg/American Theatre Critics Association New Play Award, recognizing playwrights for scripts that premiered professionally outside New York City during 2014. 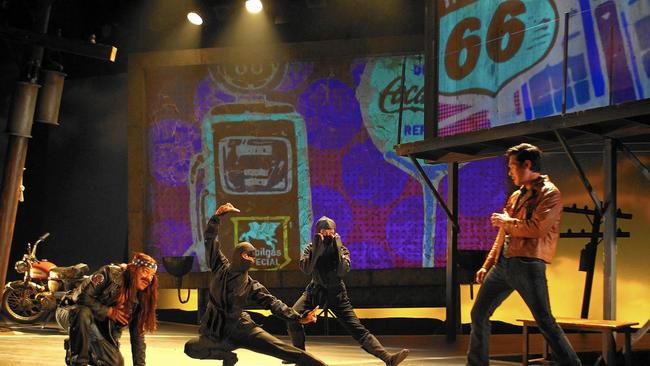 This “sexy comedy about culture-shocked, grieving Vietnamese refugees who fled to the U.S. after the fall of Saigon” features “a vivid, specific voice, a wonderful sense of humor and compelling stakes,” said the judges. Vietgone premiered at South Coast Repertory, Costa Mesa, California, and was recently produced at Oregon Shakespeare Festival (OSF) this month, with performances through October 29th. New York audiences will have the opportunity to see Vietgone, when it begins previews Oct. 4, 2016 ahead of an Oct. 25 opening at the larger of MTC’s two Off Broadway spaces, City Center Stage I.

Two citations that carry $7,500 awards were presented to Steven Dietz’s Bloomsday, which premiered at ACT Theatre in Seattle, and Jen Silverman’s The Dangerous House of Pretty Mbane, which premiered at Philadelphia’s InterAct Theatre Company. At $40,000, Steinberg/ATCA is the largest national new play award program recognizing regional theaters as the crucible for new plays in the United States.

Dietz’s play is “lovely and thoughtful,” with a “slightly supernatural sparkle” about two people meeting on the streets of Dublin, visited by their 35-years-later selves. Silverman’s play is a “lyrical love story” that “uses memorable, flawed characters to tell a powerful and personal story” about the abuse of women in South Africa.

The winners were selected from 28 eligible scripts recommended by ATCA members from around the country. They were evaluated by a committee of theater critics, led by Lou Harry of the Indianapolis Business Journal/IBJ.com.

“It isn’t just a privilege, it’s an honor to have the opportunity to experience the work of these theater artists and to passionately debate with such learned colleagues,” said committee chair Harry. “These are plays the American theatre can take great pride in — plays that deserve long lives and multiple productions.”

In 1977, ATCA began to honor new plays produced at regional theaters outside New York City, where there are many awards. Since 2000, the award has been generously funded by the Harold and Mimi Steinberg Charitable Trust.

The Harold and Mimi Steinberg Charitable Trust was created in 1986 by Harold Steinberg on behalf of himself and his late wife. In support of the American theater, it has provided grants totaling millions of dollars for new productions of American plays and educational programs for those who may not ordinarily experience live theater.

ATCA was founded in 1974 and works to raise critical standards and public awareness of critics’ functions and responsibilities. The only national association of professional theater critics, with members working in print, on radio and television and websites, ATCA is affiliated with the International Association of Theatre Critics, a UNESCO-affiliated organization that sponsors seminars and congresses worldwide.

ATCA also administers the $10,000 Francesca Primus Prize, funded by the Francesca Ronnie Primus Foundation, honoring contributions to the American theater by female artists who have not yet achieved national prominence, and it awards the Osborn Award to an emerging playwright. Annually, ATCA makes a recommendation for the Regional Theater Tony Award presented by the American Theatre Wing/Broadway League and votes on inductions into the Theater Hall of Fame.

All text, graphics, articles & photographs unless otherwise indicated: © 2000-2016 Lia Chang Multimedia. All rights reserved. All materials contained on this site are protected by United States copyright law and may not be reproduced, distributed, transmitted, displayed, published or broadcast without the prior written permission of Lia Chang. You may not alter or remove any trademark, copyright or other notice from copies of the content. For permission, please contact Lia at lia@liachangphotography.com