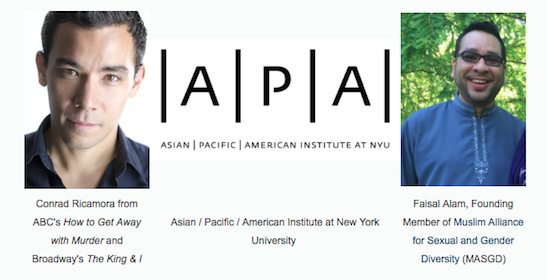 Actor Conrad Ricamora, who currently appears on ABC’s “How to Get Away with Murder” as Oliver Hampton and in Lincoln Center Theater’s Tony-Award winning revival of The King & I as Lun Tha; Faisal Alam, the Founding Member of Muslim Alliance for Sexual and Gender Diversity (MASGD);  and The Asian/Pacific/American Institute at NYU are this year’s NQAPIA Community Catalyst Award recipients.

Tickets are $100 per person, $75 for members of NQAPIA community partner organizations; and a limited-income rate of $50 or less is also available. Sponsorships ($850+), host committee, and program ads are available: http://bit.ly/1NSwNMK.

All proceeds benefit NQAPIA and QAPI groups in NYC to attend National QAPI Leadership Summit and Training in New Orleans in August.  All donations are deductible to the fullest extent allowed by law.

Contact glenn_magpantay@nqapia.org to inquire about the host committee, sponsorships, and program book ads.