Tony Award nominee Ken Watanabe is currently battling stomach cancer according to his Facebook page and has undergone laparoscopic surgery. Watanabe’s surgery was successful, but his return to Broadway in Rodgers and Hammerstein’s The King and I will be postponed while he recovers. Originally scheduled to return on March 1st, his new start date is on Thursday, March 17th and will continue through Tuesday, April 19th. Hoon Lee, who is currently playing the role, will play his final performance on Wednesday, March 16.

On Tuesday, May 3, Daniel Dae Kim, the popular star of the long-running television series “Lost” and “Hawaii Five-0,” will make his Broadway debut when he assumes the role of the King of Siam for a strictly limited eight-week engagement through Sunday, June 26.

And Jose Llana, who starred last summer as Siam’s King Mongkut, will return to the role from Tuesday, April 19 through Sunday, May 1.

KEN WATANABE made his American stage debut in The King and I, garnering a Tony Award nomination for Best Actor in a Musical for his performance. Watanabe, along with principal soloists Ruthie Ann Miles, Kelli O’Hara, Ashley Park, and Conrad Ricamora, producers David Caddick, David Lai & Ted Sperling, (Richard Rodgers, composer; Oscar Hammerstein II, lyricist), have also been nominated for a Grammy Award for Best Musical Theater Album. His Japanese theatre credits include Dialogue with Horowitz, Hamlet, Shitayamannen-cho monogatari, The Lion in Winter, and The Royal Hunt of the Sun.For his work in film, Watanabe received Oscar, Golden Globe and Screen Actors Guild award nominations for The Last Samurai. His motion picture credits also include Inception, Letters from Iwo Jima, Memoirs of a Geisha, Batman Begins, Godzilla, and Sea of Trees.

DANIEL DAE KIM starred as the King of Siam opposite Maria Friedman’s Anna Leonowens in a critically-acclaimed production of The King and I at London’s Royal Albert Hall. Best known for his starring roles on the hit television series “LOST” and “Hawaii Five-0,” his film credits include roles in The Jackal, For the Love of the Game, The Hulk, Spider-Man 2, The Cave, Crash, and The Divergent Series: Insurgent andAllegiant. In addition to his onscreen presence, Kim’s production company 3AD, has a first-look development deal with CBS Television Studios to produce original content for both film and television, the first of its kind with an Asian American actor. Born in Korea and raised in New York and Pennsylvania, Mr. Kim earned a Masters Degree in Fine Arts from NYU’s Graduate Acting Program. His many honors include a shared 2006 SAG Award for Best Ensemble for “Lost.” Daniel is on Twitter and Instagram @danieldaekim and on Facebook.

Kelli O’Hara and Jose Llana in The King and I. Photo by Paul Kolnik

JOSE LLANA starred as President Marcos in the musical Here Lies Love at the Public Theater, for which he received a Lucille Lortel Award nomination. His Broadway credits include Wonderland, The 25th Annual Putnam County Spelling Bee (Drama Desk Award), Flower Drum Song, Rent, Streetcorner Symphony, and the 1996 production of The King and I, in which he performed the role of Lun Tha. His other off-Broadway credits include Saturn Returns (Public Theater), On The Town (Shakespeare in the Park), and Falling For Eve (York Theatre). He appeared in the national tour of the musical Martin Guerre and in regional theater in The Ballad of Little Joe at Chicago’s Steppenwolf Theatre (Jefferson Award nomination), Myths and Hymnsand Candide (Ethel Barrymore Award nomination) at Philadelphia’s Prince Music Theater, and as Bill Sykes in Oliver! at the Papermill Playhouse. His film and television credits include Hitchand “Sex and the City.”

HOON LEE has also appeared on Broadway in Pacific Overtures (Roundabout Theatre Company), Flower Drum Song, and Urinetown. His off-Broadway credits include the Public Theater productions of Yellow Face (Theatre World Award, Drama League Award nomination) and Love’s Labor’s Lost; The School for Lies (Classic Stage Company); and Hamlet (Shakespeare in the Park). He starred on the Cinemax TV series “Banshee.” His other TV credits include the voice for Master Splinter on the Nickelodeon series “Teenage Mutant Ninja Turtles,” and guest star roles on “Bosch,” “The Blacklist,” “Archer,” “NYC 22,” “Blue Bloods,” “White Collar,” “Royal Pains,” “Law & Order,” and “Sex and the City”. He has been seen in the films Premium Rush, Exposed, The Oranges, We Own the Night, and Saving Face. 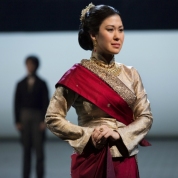 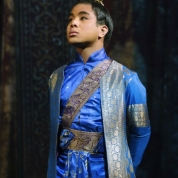 The production features choreography by Christopher Gattelli, based on the original choreography by Jerome Robbins, sets by Michael Yeargan, costumes by Catherine Zuber (2015 Tony Award), lights by Donald Holder, sound by Scott Lehrer, and musical direction by Ted Sperling. Andrew Resnick conducts The King and I‘s 29-piece orchestra performing the musical’s original orchestrations by Robert Russell Bennett and its dance and incidental music by Trude Rittman.

The King and I is performed Tuesday and Thursday evenings at 7pm and Wednesday, Friday, and Saturday evenings at 8pm, with matinees Wednesday and Saturday at 2pm and Sunday at 3pm. Tickets are available at the Lincoln Center Theater box office (150 West 65 Street), at telecharge.com, or by visiting KingandIBroadway.com. A limited number of tickets priced at $32 are available at every performance through LincTix, LCT’s program for 21 to 35 year olds. For information and to enroll, visit LincTix.org.

Lincoln Center Theater is grateful to the Stacey and Eric Mindich Fund for Musical Theater at LCT for their leading support of this production. American Express and The Jerome L. Greene Foundation are the major sponsors of The King and I. Generous support is also provided by The Blanche and Irving Laurie Foundation, Florence and Robert Kaufman, The New York Community Trust-Mary P. Oenslager Foundation Fund, and Stephanie and Fred Shuman, with additional support from the Henry Nias Foundation courtesy of Dr. Stanley Edelman, The Ted and Mary Jo Shen Charitable Gift Fund, and the National Endowment for the Arts.

Photos: Celebrating with Jose Llana, Ruthie Ann Miles, Kelli O’Hara and Company after THE KING AND I’s Special Performance for The Actors Fund