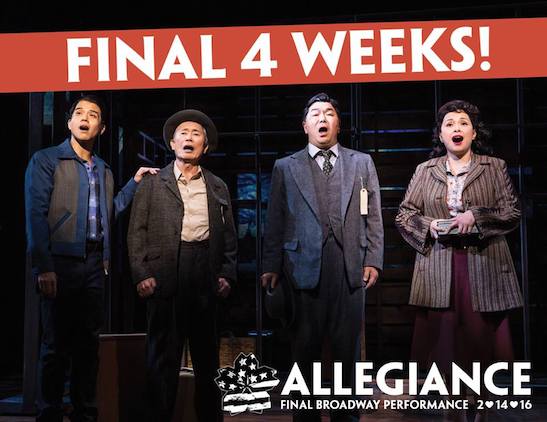 The Allegiance Original Broadway Cast Recording featuring music and lyrics by Jay Kuo, and produced by Lynne Shankel & Joel Moss for Sing Out, Louise! Productions, will be released by BroadwayRecords.com on January 22, 2016. Click here to preorder. It will be available on ITunes worldwide on January 29, 2016 (Broadway Records/Yellow Sound).

Check out video clip of the making of the Allegiance Original Broadway Cast Recording featuring Dan Horn and other cast members.

The cast of ALLEGIANCE at their first preview curtain call at the Longacre Theatre in New York on October 6, 2015. Photo by Lia Chang

At the time of its closing, Allegiance will have played 37 previews and 113 regular performances. Producers also announced a national tour and international productions are in the works. Allegiance had its world premiere in a record-breaking engagement at the Old Globe Theatre in San Diego in 2012.

Sing Out, Louise! Productions and ATA, producers for Allegiance said: “Bringing Allegiance to Broadway was not only a labor of love for our entire creative team and this company of extraordinary artists, but it was also a work with deep commitment to social relevance and impact. We are so proud to have brought George Takei’s very personal family history to the stage and – in the process – to have surfaced a chapter of history that was painfully unknown to so many. By its last performance Allegiance will have been seen on Broadway by approximately 120,000 people, a number that eerily echoes the number of Japanese Americans who were directly impacted by the events that inspired our musical, and whose rights were trampled in the name of pure fear and intolerance. We look forward to continuing to share this essential story – more relevant than ever, given today’s headlines – and this moving score with theatergoers across the country and around the world for many years to come. Audiences who have experienced Allegiance on Broadway have left the theater transformed, uplifted, enlightened, inspired, informed, and entertained. We remain committed to finding more ways in which the true impact of Allegiance will continue.”

Allegiance is the vibrant and unforgettable story of one family’s resilience in the face of seemingly-insurmountable odds, inspired by Takei’s real-life experience as a Japanese American during World War II.

George Takei and David Henry Hwang in conversation at The Center for the Study of Ethnicity and Race at Columbia University in New York on December 7, 2015. Photo by Lia Chang

During a conversation between Takei and Tony-award winning playwright David Henry Hwang in December at The Center for the Study of Ethnicity and Race at Columbia University, Hwang shared, “I finally got to see Allegiance this weekend. It’s really extraordinary. You guys have done a fantastic job. One of the things that I think is amazing from a dramaturgical standpoint is just a series of impossible choices that these people are faced with. They try to navigate through one impossible choice, then that causes another impossible choice, so that there is constantly this vice that’s closing in. It rips apart families and it’s very moving. Congratulations. I think it’s fantastic.” 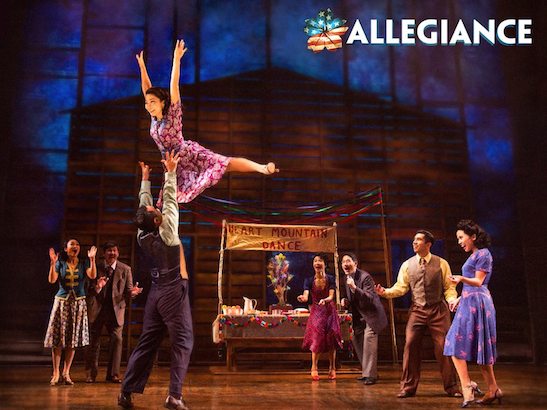 The cast of ‘Allegiance’. Photo by Matthew Murphy

Allegiance illuminates one of American history’s lesser known chapters as it tells the story of Sam Kimura (Takei), transported back nearly six decades to when his younger self (Leung) and his sister Kei (Salonga) fought to stay connected to their heritage, their family, and themselves after Japanese Americans were wrongfully imprisoned during World War II. An important story told with great resonance and intimacy, Allegiance explores the ties that bind us, the struggle to persevere, and the overwhelming power of forgiveness and, most especially, love.

Allegiance has implemented a digital lottery for $39 seats available each day via allegiancemusical.com/lottery. Entries can be submitted the day of the preferred performance, either by 11AM for matinees or 3PM for evening performances. Winners will be notified via email or text, depending on what they select during the entry process, and winners may purchase up to 2 tickets which will be held at the box office. Allegiance will also offer a limited number of $39 rush tickets for patrons 35 years old and under for each performance beginning at the opening of the box office each day. There will be a limit of 2 tickets per customer. Cash or credit cards will be accepted for all lottery and rush tickets, and seat locations will vary depending on availability.

Tony Eligibility: ALLEGIANCE’s Lea Salonga​ and Telly Leung are eligible for Best Performance by an Actor/Actress in a Leading Role in a Musical

‘Colors of Confinement: Rare Kodachrome Photographs of Japanese American Confinement in World War II’ on view at Center for the Study of Ethnicity and Race at Columbia University through May 1

“Enduring Conviction: Fred Korematsu and His Quest for Justice” by Lorraine K. Bannai