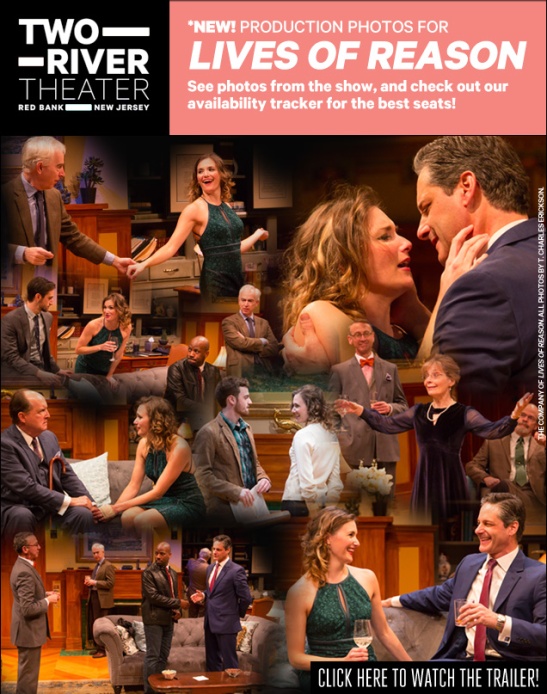 The Company of ‘Lives of Reason’. Photos by T. Charles Erickson

Set at an English Department faculty party, Lives of Reason brings audiences inside the world of academia, exposing the challenges of intellectual life—and what happens when one woman’s secret passions explode and her authentic self is revealed.

Says Artistic Director John Dias, “Robert Rechnitz and Kenneth Stunkel are late-career playwrights who spent much of their professional lives as professors at Monmouth University, which is where Bob—with his wife Joan—founded Two River Theater 22 years ago. It has been moving for us to witness both men, who began their careers as artists—Bob as an actor, Ken as a dancer—embark on a new creative endeavor as co-writers of this play.”

Featured in the company are Matthew Lieff Christian (Anthem), Philip Goodwin (As You Like It), Maurice Jones (Romeo and Juliet), Mairin Lee (The Heiress), Patrick Monaghan (Two River Theater’s A Little Shakespeare program),William Parry (Sunday in the Park with George), Peter Rini (Proposals), Jay Russell (End of the Rainbow), Maureen Silliman (The Glass Menagerie), and John C. Vennema (The Ride Down Mt. Morgan).

Robert Rechnitz founded Two River Theater in 1994 and serves as the theater’s Executive Producer. An educator, writer, and director, he is one of New Jersey’s most esteemed theater leaders. He was a Professor of American Literature at Monmouth University for 35 years, contributing scholarly articles and short stories to various academic journals. Among the notable productions he has directed at Two River are Curse of the Starving Class, A View from the Bridge, The Glass Menagerie, Uncle Vanya, American Buffalo, You Can’t Take It with You, and True West.

Kenneth Stunkel was a Professor of History at Monmouth University for many years, serving for 13 years as Dean of Humanities and Social Sciences and Dean of Arts and Sciences. He is author or co-author of nine books and numerous articles and essays about India, China, and Japan, ancient Greece and Rome, the history of ideas, energy and the environment, technology and ethics, and world politics. Previously, he studied ballet and modern dance; he was with the National Ballet for two years, and was a lead dancer in the performing company of Ethel Butler, who was closely associated as a dancer and teacher with Martha Graham.

Jonathan Fox is Executive Artistic Director of Ensemble Theatre Company of Santa Barbara, where his recent productions include Sweeney Todd and Tom Waits’s musical adaptation of Woyzeck. European productions include Who’s Afraid of Virginia Woolf? at the English Theatre of Frankfurt and Crimes of the Heart at the Vienna English Theatre. In 1994, he joined Robert and Joan Rechnitz in establishing Two River Theater, serving as managing director through 1999 and artistic director through 2006. His Two River productions include The Umbrellas of Cherbourg and a festival of work by Samuel Beckett.

Inside Two River is a series of events specially curated for each Two River Theater production. For more information or to reserve seats, patrons should visit tworivertheater.org or call 732.345.1400.

Literary Manager Anika Chapin will lead a discussion of Stoner (the 1965 book The New Yorker called “the greatest American novel you’ve never heard of”), which tells the story of William Stoner, a farm boy from the middle of America who becomes an English professor at a drab Midwestern university. Mired in university politics and facing the fallout from an affair with a fellow professor, Stoner finds the life of the mind isn’t any easier than the brutal farm work he grew up with. Two River’s Book Club (free and open to the public) will discuss the “academic bubble,” emotional freedom, and the new American dream.

A Night of Classic and Contemporary Poetry, Tuesday, January 26 at 7pm in the Marion Huber Theater

Playwrights Robert Rechnitz and Kenneth Stunkel, artists from Lives of Reason, and notable leaders from our community will perform live readings of great poems, both old and new, on the set of the play.

Before Play and Lobby Display

Audiences will learn more about Lives of Reason in Two River’s Before Play lecture series, which takes place 45 minutes prior to every performance, and Lobby Display.

Working with Google, Two River has created and launched a virtual tour of its facility, which lives on Google Maps and tworivertheater.org. This virtual tour provides an additional level of support and benefit for patrons who use wheelchairs or require other assistance by allowing them to virtually come through the theater’s front doors and view the space in detail in advance of their visit.

Wednesday, February 3 at 1pm and 7pm

Thursday, February 4 at 1pm and 8pm

Saturday, February 6 at 3pm and 8pm

The lead production sponsors for Lives of Reason are Monmouth University and Saker ShopRites. Inside Two River is sponsored by The William T. Morris Foundation. The Before Play series is sponsored by Zager Fuchs, PC.

Two River Theater, under the leadership of Artistic Director John Dias and Managing Director Michael Hurst, creates great American theater performed by award-winning artists. We produce American and world masterpieces, and new plays and musicals. Two River Theater offers new-play commissions and artistic development activities that support the most adventurous artists in the American theater; invites its audience to be part of the creative process through readings and open rehearsals; and cultivates students and young people to participate in innovative arts-education programs and become a new generation of theatergoers. Founded in 1994 by Joan and Dr. Robert M. Rechnitz, Two River Theater is easily accessible by car, train, or bus, with great restaurants and shopping within walking distance of the theater. For more information, visit tworivertheater.org or call 732.345.1400.

One comment on “Photos: Two River Theater’s World Premiere of ‘Lives of Reason’ through Feb. 7”