The Theatre School at DePaul University (John Culbert, Dean) is presenting The 2015 Awards for Excellence in the Arts gala on Monday, November 9, 2015, in the Atlantic Ballroom of the Radisson Blu Aqua Hotel. The Radisson Blu is located at 221 North Columbus Drive. The event will begin with a 6 PM cocktail reception, followed by dinner and program at 7 PM, and will conclude with a dessert reception.

The Annual Awards for Excellence in the Arts recognize distinguished artists and visionaries who have proven their dedication, talent, and leadership in support of the arts. All proceeds from the event directly benefit The Theatre School Scholarship Fund, supporting students from all over the nation to train at the school.

The Theatre School will honor André De Shields (Ain’t Misbehavin‘; The Wiz; The Fully Monty) with the 2015 Award for Excellence in the Arts. Mr. De Shields is currently rehearsing GOTTA DANCE, the new Broadway-bound musical about professional basketball’s first ever aged 60-and-older dance team, which begins performances on December 13, 2015 and runs through January 10, 2016 at Broadway In Chicago’s Bank of America Theatre. Over the summer, he debuted his new work, CONFESSIONS OF A P.I.M.P. at Victory Gardens Theater. 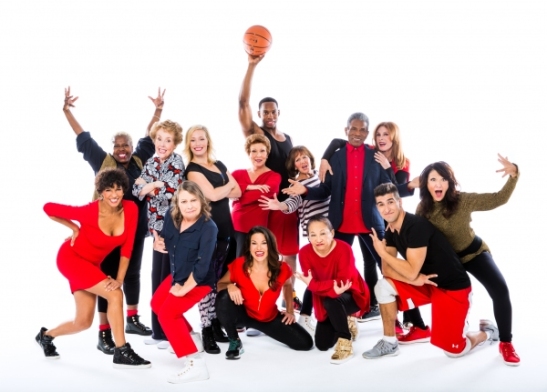 The cast of GOTTA DANCE. Photo by Matthew Murphy

In a career spanning forty-six years, De Shields has distinguished himself as an unparalleled actor, director, choreographer, and educator. He is the recipient of three Jeff Awards, one as Director for Victory Gardens Theater’s 1987 production of The Colored Museum, and two as Featured Performer in a Musical for the Goodman Theatre’s productions of Play On! (1998) and Mary Zimmerman’s The Jungle Book (2013). André’s professional career began at Chicago’s Shubert Theatre in the 1969 production of Hair. From there he moved on to The Me Nobody Knows at the Civic Opera House, and ultimately became a member of The Organic Theatre Company where he created the role of Xander the Unconquerable, Ruler of the Sixth Dimension, in the cult sensation Warp. A multiple Tony Award nominee, De Shields is best known for his show-stopping performances in four legendary Broadway musicals: The Wiz, Ain’t Misbehavin’, Play On! and The Full Monty. His numerous accolades include an Emmy Award for the NBC Special based on Ain’t Misbehavin’, the National Black Theatre Festival’s Living Legend Award, the Village Voice OBIE Award for Sustained Excellence of Performance, and two Doctor of Fine Arts degrees honoris causa from the University of Wisconsin-Madison and the State University of New York-College at Buffalo.

Lou Raizin (President, Broadway In Chicago) will receive the 2015 Leadership Award for Excellence in the Arts in recognition of extraordinary contributions to arts and cultural institutions in Chicago. Lou Raizin has over 30 years of experience in the entertainment industry. As a founder and the prime force behind Broadway In Chicago, a joint theatrical venture formed in 2000, his leadership propelled the transformation of Chicago from a short-term stop on “the road” to the third most important city in the world for theater. Encompassing the five premier theatre stages in the city, Broadway In Chicago has brought an economic impact of up to over $750 million annually to the City of Chicago and the State of Illinois, and supports more than 9,200 local jobs. As Senior Vice President of the Nederlander Organization, one of the world’s leading entertainment companies, Raizin is responsible for the development of new ventures, theatres, and the pursuit of acquisitions in entertainment-related fields domestically and abroad. Raizin’s focus on economic development, tourism, and culture has led to the creation and continued sponsorship of the annual League of Chicago Theater’s Emerging Theater Award and the Illinois High School Musical Theatre Award. Raizin’s stint as Chair of the Chicago Loop Alliance led to the creation of Pop Up Art Loop, comprised of over 14 galleries, and a number of major public art projects in the city. Raizin serves on the Executive Committee of Choose Chicago and chairs the State Street Commission.

Theatre School alumna Karen Aldridge will accept the 2015 Alumni Award for Excellence in the Arts. Karen Aldridge is an accomplished television, film, and theatre actor. She starred in the international tour of Le Costume, a French-language production directed by Peter Brook, immediately after receiving her MFA in Acting from The Theatre School. She originated the role of Mrs. Phelps in the Royal Shakespeare Company’s production of Matilda the Musical on Broadway. She has appeared in The Trinity River Plays (Jeff Award nomination for Best Actress), Proof (Black Theater Alliance Award-Ruby Dee Award for Best Leading Actress in a Play), The Good Negro, and The Cook (Jeff Award nomination for Best Actress), all at the Goodman Theatre. Other Chicago credits include Olivia in Twelfth Night, Lady Macbeth in Macbeth, Isabella in Edward II, and Princess of France in Love’s Labour’s Lost at Chicago Shakespeare Theater; and Tracy Letts’ Pulitzer Prize-nominated Man from Nebraska at Steppenwolf Theatre Company, where she originated the role of Tamyra. Other notable Chicago roles include Nina in The Seagull at Writers’ Theatre; and Joan in Far Away and Hester in In the Blood (Jeff Award nomination for Best Actress) at Next Theatre Company. Her regional credits include productions with the Indiana Repertory Theatre, Shakespeare Santa Cruz, the Alabama Shakespeare Festival, American Conservatory Theater, Magic Theatre, Aurora Theatre Company, and Marin Theatre Company. On television, Karen has appeared in a recurring role as Dr. Kendra on NBC’s Chicago Fire and as Dr. Ella Harris in the Golden Globe-winning series Boss. Other television & film credits include CBS’ Blue Bloods, CBS’ Unforgettable, and Ron Howard’s The Dilemma. Future projects include Baz Luhrmann’s original Netflix series The Get Down and Chicago Shakespeare Theater’s production of Tug of War.

Single tickets can be purchased for $500. For more information and table pricing, please contact DePaul University’s Office of Advancement: (312) 362-8455 or eventRSVP@depaul.edu.