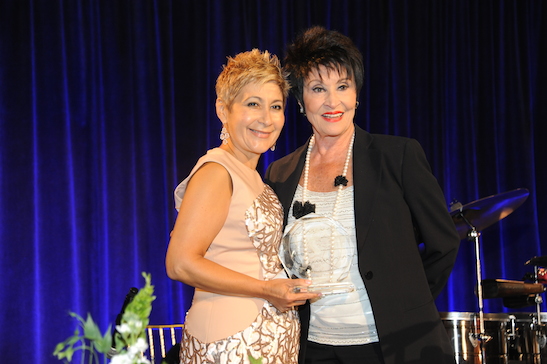 In her remarks, Ms. Rivera said  “Not only here in New York City but throughout the country, Hispanic women are giving new strength and energy to the world economy, whether it be in the arts, medicine, law or Wall Street.  We have made vital contributions and will continue to do so.  I feel that soon we will become not 100 Hispanic Women but 100 million Hispanic women all doing daring and exceptional things. We are ALL part of the American dream.”

“We are extremely proud of Chita Rivera’s outstanding accomplishments, the many years of commitment from Milagros Baez O’Toole, and the amazing work of all this year’s gala honorees,” Nancy Genova President of the 100 Hispanic Women, Inc. stated.

Chita Rivera is Broadway’s most versatile and accomplished singer, dancer and actress. She has won Two Tony Awards and received an exceptional 10 Tony Award nominations for her starring roles in such landmark Broadway musicals as “West Side Story, “Bye Bye Birdie,” “Chicago” “The Rink”, “Kiss of the Spider Woman” and, most recently “The Visit.”  Ms. Rivera received the Presidential Medal of Freedom from President Barack Obama, and was the first Hispanic woman to receive a Kennedy Center Honor.

100 HISPANIC WOMEN NATIONAL, INC. is a non-profit, non-partisan women’s organization dedicated to guiding Latinas towards excellence in leadership by fostering educational enrichment and creating opportunities to promote personal and professional advancement.  It is through the annual gala that the organization raises the much needed funds to support the organization’s efforts to secure scholarships for our young scholars.