Ping Chong at the opening reception of Chinese American: Exclusion/Inclusion at the New-York Historical Society in New York on September 23, 2014. Photo by Lia Chang

I’ve alway considered Ping Chong to be a national treasure and now it is official. On Thursday, September 10, 2015, at 3:00 p.m. ET in the East Room ceremony at the White House, President Barack Obama will present the 2014 National Medal of Arts to Mr. Chong, who is being recognized for his contributions as a theater director, choreographer, and video and installation artist. Mr. Chong’s innovative performances explore race, history, technology, and art to challenge our understanding of humanity in the modern world.

NEA Chairman Jane Chu said, “Ranging from literature, theater, and visual arts to arts presentation and philanthropy, these artists and organizations have broadened our horizons and enriched our lives. I join the President in congratulating them and celebrating what the arts do for America.”

First Lady Michelle Obama will attend. The event will be live streamed at WH.gov/Live.

The National Medal of Arts is the highest award given to artists and arts patrons by the federal government. It is awarded by the president of the United States to individuals or groups who are deserving of special recognition by reason of their outstanding contributions to the excellence, growth, support, and availability of the arts in the United States.

John Baldessari for his contributions as a visual artist.  His ambitious work combines photography, painting, and text to push the boundaries of image, making him one of the most influential conceptual artists of our time. (Venice, CA)

Miriam Colón for her contributions as an actress. Ms. Colón has been a trailblazer in film, television, and theater, and helped open doors for generations of Hispanic actors. (New York, NY)

The Doris Duke Charitable Foundation for supporting creative expression across the country. With generosity and a bold commitment to artistic risk, this foundation has helped artists, musicians, dancers, and actors share their talents, enriching the cultural life of our Nation.  (New York, NY)

Sally Field for her contributions as an actress and filmmaker. The dignity, empathy, and fearlessness of her performances have touched audiences around the world, and she has deployed those same qualities off-screen in her advocacy for women, LGBT rights, and public health (Los Angeles, CA)

Ann Hamilton for her contributions as a visual artist. Ms. Hamilton uses time as process and material, and her work demonstrates the importance of experiencing the arts first-hand in the digital age. (Columbus, OH)

Stephen King for his contributions as an author. One of the most popular and prolific writers of our time, Mr. King combines his remarkable storytelling with his sharp analysis of human nature.  For decades, his works of horror, suspense, science fiction, and fantasy have terrified and delighted audiences around the world. (Bangor, ME)

Meredith Monk for her contributions as a composer, singer, and performer. Renowned for her groundbreaking vocal techniques, Ms. Monk has reimagined the instrument of voice with her innovative work. (New York, NY)

University Musical Society for presenting the performing arts to communities in Michigan. For over a century, the Society has brought world-class orchestras, dance ensembles, jazz performers, and theater companies to Michigan, while supporting the study and creation of new works. (Ann Arbor, MI)

Tobias Wolff for his contributions as an author and educator.  His raw works of fiction examine themes of American identity and individual morality. With wit and compassion, Mr. Wolff’s work reflects the truths of our human experience. (Stanford, CA)

The National Endowment for the Arts manages the nomination process on behalf of the White House. Each year, the Arts Endowment seeks nominations from individuals and organizations across the country. The National Council on the Arts, the NEA’s presidentially appointed and Senate-confirmed advisory body, reviews the nominations and provides recommendations to the President, who selects the recipients.

About the National Endowment for the Arts

Established by Congress in 1965, the NEA is the independent federal agency whose funding and support gives Americans the opportunity to participate in the arts, exercise their imaginations, and develop their creative capacities. Through partnerships with state arts agencies, local leaders, other federal agencies, and the philanthropic sector, the NEA supports arts learning, affirms and celebrates America’s rich and diverse cultural heritage, and extends its work to promote equal access to the arts in every community across America.

The National Humanities Medal honors an individual or organization whose work has deepened the nation’s understanding of the human experience, broadened citizens’ engagement with history and literature or helped preserve and expand Americans’ access to cultural resources.

Created as an independent federal agency in 1965, NEH awards grants that support research, education, preservation, and public programs in the humanities that have resulted in thousands of museums exhibits, scholarly books, films, and radio programs. NEH is celebrating its 50th anniversary beginning Sept 29.

“The National Endowment for the Humanities is proud to join President Obama in celebrating the achievements of these distinguished medalists,” said NEH Chairman William Adams. “The recipients of this medal have sparked our imaginations, ignited our passions, and transformed our cultural understanding. They embody how the humanities can serve a common good.”

The first National Humanities Medal was awarded in 1996. Since then, 175 have been bestowed — to 163 individuals and 12 organizations — inclusive of this year’s recipients. 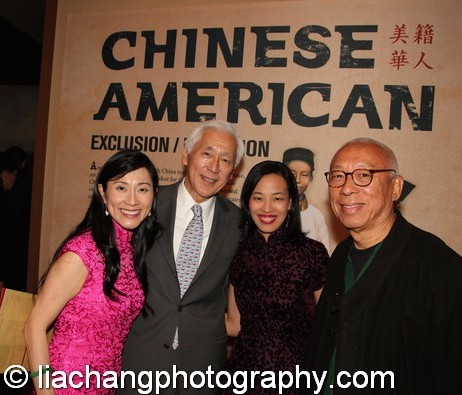 Agnes-Hsu Tang and her husband Oscar Tang, Lia Chang and Ping Chong at the opening reception of Chinese American: Exclusion/Inclusion at the New-York Historical Society in New York on September 23, 2014. Photo by Don Pollard