“Water to Paper, Paint to Sky: The Art of Tyrus Wong,” – Retrospective of Disney Legend at MOCA through September 13

The Art of Tyrus Wong on view at MOCA.

The Museum of Chinese in America (MOCA) is presenting Water to Paper, Paint to Sky: The Art of Tyrus Wong through September 13, 2015. The exhibition focuses on the life and work of artist Tyrus Wong—a celebrated painter, muralist, kite maker, lithographer, Hollywood sketch artist, calligrapher, ceramicist, and Disney Legend. At age 104, Wong is still a practicing artist today.

Tyrus at his home in Sunland, CA 2004. Photograph by Peter Brenner, courtesy of the Museum of California Art and Design (MoCAD)

President of MOCA, Nancy Yao Maasbach shared, “Water to Paper, Paint to Sky: The Art of Tyrus Wong is part of a larger narrative exploring art and Chinese American heritage across geographical and cultural boundaries. Wong’s work continues to inspire and influence the leading animators and contemporary artists of today.”

This retrospective exhibition features Wong’s extensive body of work which includes his paintings, hand-painted ceramics and silk scarves, original greeting cards, works on paper, and latest kite creations. It was the ethereal beauty of Wong’s Eastern influenced paintings, his sense of color, richness, and imagination that caught Walt Disney’s eye and became the inspiration for the animated feature Bambi (1942). Wong’s singular vision and impressionistic art influenced the groundbreaking movie’s overall visual style and changed the way animation art was presented.

A young Tyrus Wong, before immigration to the United States c. 1919.
Image courtesy of the Walt Disney Family
Museum and Tyrus Wong

Arriving in the United States with his father in 1919 from the Toishan district in Guangdong, China, Wong was initially detained in Angel Island for three weeks because of the Chinese Exclusion Act of 1882. After his release, Wong and his father settled in Sacramento, later moving to Los Angeles’s Chinatown.

“Wong’s extraordinary stories need to be told, alongside decades of his art work. We are delighted to work with Tyrus, his daughter Kim Wong, and Michael Labrie at The Walt Disney Family Museum on debuting Tyrus’ work in New York,” states Herb Tam, director of exhibitions at MOCA.

Wong was one of the bohemian artists whose creativity and drive helped shape the cultural, artistic life of Los Angeles during the 1930s and 40s. He carved out a creative career working as a Depression-era muralist, California watercolorist, and film production illustrator. Wong worked at the Warner Bros. studio from 1942 to 1968, creating concept images for many films including Rebel Without a Cause [1955] and The Wild Bunch [1969], to name a few. These artworks conjured stunning environments, in many cases resembling beautifully executed architectural renderings.

One of the conceptual drawings from “The Wild Bunch.” Image courtesy of the Walt Disney Family Museum and Tyrus Wong

In 2001, Wong was named a Disney Legend. Wong has been inducted into the World Kite Museum and Hall of Fame for his amazing creations, which include hundred-foot long centipedes, butterflies, and schools of delicately painted goldfish. These handmade kites inspired by the complex art of Chinese kite making will be a central exhibition showcase.

During the run of the exhibition, MOCA will offer a line-up of events, public programs, tours, and educational workshops. Check back on the Museum’s website for upcoming exhibition- related programs.

Museum Educators will take you on an in-depth exploration of the special exhibition.

About Tyrus Wong
Wong was born in the Toishan district in Guangdong, China in 1910. In 1919, he and his father immigrated to America leaving behind Wong’s mother and sister, whom they never saw again. Arriving in the United States, Wong was initially detained in Angel Island for three weeks because of the Chinese Exclusion Act. After his release from Angel Island, Wong and his father settled in Sacramento, later moving to Los Angeles’s Chinatown neighborhood.

Early Years
Wong’s interest in painting and drawing emerged at an early age. Though they were poor, his father encouraged his talents by having him practice calligraphy by dipping his brushes in water and “painting” on newspaper. Indifferent to school, he dropped out of Benjamin Franklin Junior High in Pasadena, CA to attend the Otis Art Institute on a full scholarship. There he received formal western art training while studying the art of the Sung Dynasty at the Los Angeles Central Library in his free time.

Despite graduating in the midst of the Depression, Wong had an active artistic career. He exhibited work at a 1932 group exhibition at the Chicago Art Institute that featured Pablo Picasso. Wong was also hired as part of the Federal Arts Project, a branch of the New Deal-era Works Progress Administration (WPA). His work during this period was heavily influenced by his friend, the highly regarded modernist painter Stanton MacDonald- Wright, best known for his use of rich harmonious colors (a style referred to as “synchrony”) and his integration of Chinese compositions.

The Dragon’s Den
Though he exhibited regularly, Wong and his fellow artists struggled to survive. Their answer was the Dragon’s Den, a subterranean, trendy, Chinatown restaurant that attracted Hollywood stars such as Peter Lorre, Anna Mae Wong, and Sydney Greenstreet. It stood out among the chop suey joints of Chinatown and was the brainchild of close friend Eddy See. It boasted wall-to-wall murals and hand-painted menus by Wong and his fellow artists. It was there that he met Ruth Kim, his future wife. 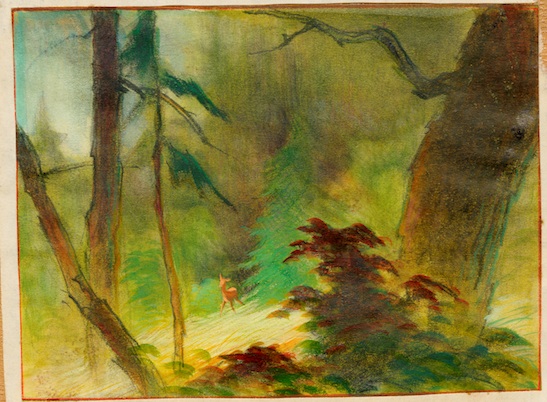 Walt Disney Studios
In 1938, following his marriage and birth of his first daughter, Wong took a job at the Walt Disney Studios as an “inbetweener”, one who goes through the tedious process of making “in-between” drawings that filled out the movement of the characters between the animators’ key drawings he began at Disney drawing hundreds of sketches of Mickey Mouse. He found the work tedious and numbing. When he heard that the studio was in pre- production on the feature film Bambi, he went home and painted several pictures of a deer in a forest. These small, but evocative sketches captured the attention of Walt Disney and became the basis for the film’s visual style. Tyrus’s Chinese-inspired sketches and paintings set the look and tone for Bambi, and were some of the most strikingly beautiful art ever produced at the Walt Disney Studios.

Warner Brothers
From Disney, Wong headed to nearby Warner Brothers, where he switched from fantasy to realism. He was hired as a production illustrator and sketch artist where he painted and sketched concept art for hundreds of live-action films, including Rebel Without A Cause, Calamity Jane, Harper, The Wild Bunch, Sands of Iwo Jima, Auntie Mame, April in Paris, and PT 109. Wong was frequently loaned out to Republic Pictures where he worked on many John Wayne westerns, a genre that would become a favorite of his. He stayed at Warner Bros. for the next 26 years until his retirement in 1968.

Throughout his years at the studio, Wong continued to paint and exhibit his fine art. In 1954, he was featured in a short film produced by Eliot O’Hara demonstrating Chinese brushwork techniques. His commercial work included designing greeting cards for over 20 years, illustrating magazine covers and children’s books, and painting calligraphic style designs on Winfield ceramic ware that sold in high-end department stores.

Kite Building
After retiring, he turned his attention to designing and building hand-made kites. His dozens of designs include multi-colored 100-foot centipedes, flocks of swallow, butterflies, and panda bears. In 1990, he and his kites were featured in the short film, Flights of Fancy. To this day, Wong flies his kites every month in Santa Monica.

Tyrus and one of his kites on the beach in 2013. Photo: Sara Jane Boyers.

Water to Paper, Paint to Sky: The Art of Tyrus Wong is organized by The Walt Disney Family Museum, San Francisco, CA. 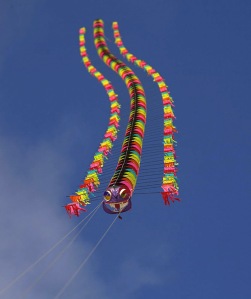 About Museum of Chinese in America (MOCA)
MOCA’s mission is to celebrate the living history of the Chinese experience in America, to inspire our diverse communities to contribute to America’s evolving cultural narrative and civil society, and to empower and bridge our communities across generations, ethnicities and geography through our dynamic stories.

MOCA Free Summer Thursdays: Free gallery admission every Thursday through Labor Day 2015* is made possible through the generosity of the New York City Department of Cultural Affairs in partnership with the City Council, and J.T. Tai & Co Foundation.