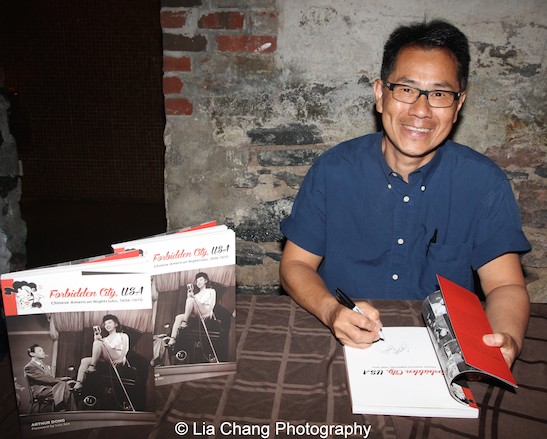 Arthur Dong’s Forbidden City, USA: Chinese American Nightclubs, 1936-1970 is among this year’s winners of the Thirty-Sixth Annual American Book Awards, presented by the Before Columbus Foundation. The 2015 American Book Award winners will be formally recognized on Sunday, October 25th from 2:00-5:00 p.m. at the SF Jazz Center, Joe Henderson Lab, 201 Franklin Street (at Fell), San Francisco, CA. This event is open to the public.

I  caught up with Dong last month in New York at the Museum of Chinese in America (MoCA) where he presented an entertaining talk about the subjects of his book, Forbidden City, USA: Chinese American Nightclubs, 1936-1970. The program, which was followed by a book signing, was part of the 38th Asian American International Film Festival’s two-day tribute to the Oscar®-nominated and three-time Sundance award-winning filmmaker/author. 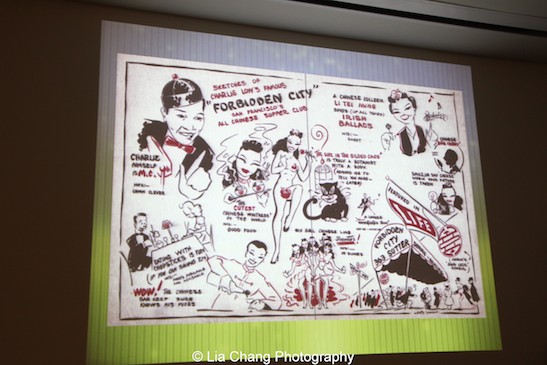 Forbidden City, U.S.A. captures the magic and glamour of the Chinese American nightclub scene, which peaked in San Francisco during World War II.  Previously unpublished personal stories, along with over four hundred stunning images and rare artifacts, are presented in this “sexy and insightful chronicle” of Asian American performers who defied racial and cultural barriers to pursue their showbiz dreams.

It was the mid-1930s: Prohibition was repealed and the Great Depression was waning. With a global conflict on the rise, people were out to drink, dine, dance, and see a show to forget their woes—and what a surprise for the world to behold an emerging generation of Chinese American entertainers commanding the stage in their own nightclubs. 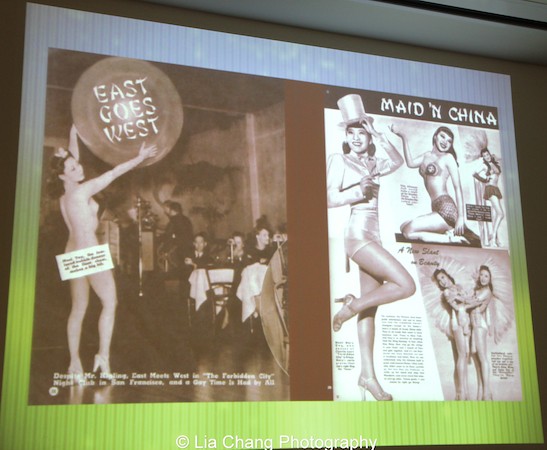 Forbidden City, USA reveals the sassy, daring, and sometimes heartbreaking memories of the dancers, singers, and producers who lived this story, and it weaves in a fascinating collection of photos, postcards, menus, programs, and yes, even souvenir chopsticks. Together they recreate a forgotten era, treating readers to a dazzling night on the town.

“Forbidden City, USA” is the culmination of Arthur Dong’s nearly thirty-year devotion to the topic of Chinese American nightclubs, originally inspired by his research for his documentary of the same name.

I first met Arthur when he came to New York to interview dancer turned manager of Asian American talent Jadin Wong (my former manager) for the documentary. The tome is Dong’s virtual love letter to those who paved the way and made their mark for today’s Asian American performing artists. 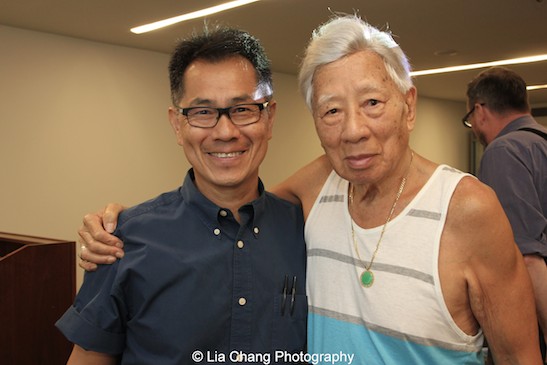 Wally Wong, brother of dancer and talent manager Jadin Wong; Broadway performer Baayork Lee, who originated the role of Connie in A Chorus Line and is currently executive artistic director of the National Asian Artists Project; “Orange in the New Black” actress Lori Tan Chinn, who will be coming to Broadway next year in Jerry Mitchell’s Gotta Dance, along with Dong’s long-time partner Young Gee and their son, Reed were in the house. 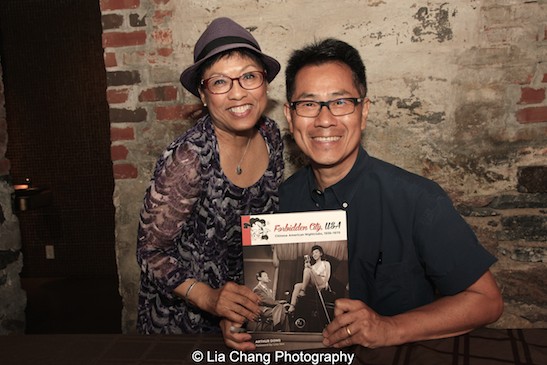 Arthur Dong and Broadway performer Baayork Lee at MoCA in New York on July 26, 2015. Lee originated the role of Connie in the Chorus Line and is currently executive artistic director of the National Asian Artists Project. Photo by Lia Chang

Dong’s previously published works as editor and contributing writer include the exhibition catalogues for shows that he also curated: “Chop Suey on Wax: The Flower Drum Song Album” at the Chinese Historical Society of America Museum in, San Francisco and “Hollywood Chinese: The Arthur Dong Collection” at the Chinese American Museum in Los Angeles. 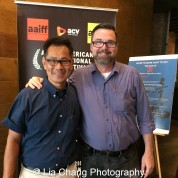 Darryl Tom, son of Chinatown nightclub dancer Beatrice Tom, introduces Arthur Dong to the story of his mother at MoCA in New York on July 26, 2015. Photo by Lia Chang 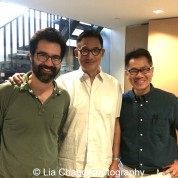 Arthur Dong
As a film student at San Francisco State University, Arthur Dong produced Sewing Woman, his Academy Award nominated short documentary in 1984. The film focused on his mother’s immigration to America from China. Instead of finding an outside distributer for the film, Dong then started his own company, DeepFocus Productions, and serves as its producer, director and writer. Dong has produced, directed, written, edited, and ﬁlmed independent ﬁlms on social issues such as gay rights and the Chinese American experience. A two-time Rockefeller Media Arts Fellow as well as a Guggenheim Fellow in Film, Dong has served on the boards of the Academy of Motion Picture Arts and Sciences, Film Independent, OutFest, and the National Film Preservation Board at the Library of Congress. In addition to the 1995 Peabody Award for his highly praised film “Coming Out Under Fire,” the honors include three Sundance Film Festival awards, an Oscar nomination, the Berlin Film Festival’s Teddy Award, Taipei’s Golden Horse Award, a GLAAD Media Award, and ﬁve Emmy nominations.

About the American Book Awards
The American Book Awards were created to provide recognition for outstanding literary achievement from the entire spectrum of America’s diverse literary community. The purpose of the awards is to recognize literary excellence without limitations or restrictions. There are no categories, no nominees, and therefore no losers. The award winners range from well-known and established writers to under-recognized authors and first works. There are no quotas for diversity, the winners list simply reflects it as a natural process. The Before Columbus Foundation views American culture as inclusive and has always considered the term “multicultural” to be not a description of various categories, groups, or “special interests,” but rather as the definition of all of American literature. The Awards are not bestowed by an industry organization, but rather are a writers’ award given by other writers.

Congrats to all of the 2015 American Book Award Winners listed below.

An Indigenous People’s History of the United States (Beacon Press)

This Changes Everything: Capitalism vs. The Climate (Simon & Schuster)

The Universal Tone: Bringing My Story to Light (Little, Brown and Company)

The People’s Platform: Taking Back Power and Culture in the Digital Age (Henry Holt)

Lia Chang is an award-winning filmmaker, a Best Actress nominee, a photographer, and an award-winning multi-platform journalist. Lia has appeared in the films Wolf, New Jack City, A Kiss Before Dying, King of New York, Big Trouble in Little China, The Last Dragon, Taxman and Hide and Seek. She is profiled in Jade Magazine.