Donica Lynn and André De Shields in CONFESSIONS OF A P.I.M.P. in Victory Gardens’ 2015 IGNITION Festival of New Plays in Chicago on July 16, 2015. Photo by Lia Chang

André De Shields in CONFESSIONS OF A P.I.M.P. in Victory Gardens’ 2015 IGNITION Festival of New Plays in Chicago on July 16, 2015. Photo by Lia Chang

From the heat of urban insurrection in Baltimore, Maryland to the incandescent glare of New York’s Great White Way, “Jelly Belly” has many stories to tell. It was a packed house for the Two-time Tony nominee who shared his adventure from inner city impoverishment to self-actualization, through song, dance and spoken word.

On Sunday, July 19, 2015, De Shields will be featured in a staged reading of Basil Kreimendahl’s Sadie River’s Drag Ball on the Lawn, with Echaka Agba, Chris Chmelik, and Mary Williamson, directed by Bonnie Metzgar at 7:30 p.m.

Synopsis: Sadie River, Mother to The House of River, teaches her unconventional drag family a new performance that she believes will change their lives. Rather than schooling them on gender performance, she attempts to educate her working-poor family in the art of passing as upper-class.

In a career spanning forty-six years, André De Shields has distinguished himself as an unparalleled actor, director, choreographer and educator.  He is the recipient of three Jeff Awards, one as Director for Victory Gardens’ 1987 production of The Colored Museum, and two as Featured Performer in a Musical for the Goodman Theatre productions of Play On! (1998) and Mary Zimmerman’s The Jungle Book (2013).  In fact André’s professional career began at Chicago’s Shubert Theatre in the 1969 production of Hair.  From there he moved on to The Me Nobody Knows at the Civic Opera House, and ultimately became a member of The Organic Theatre Company, where he created the role of Xander the Unconquerable, Ruler of the Sixth Dimension in the cult sensation Warp. A multiple Tony Award nominee, he is best known for his show-stopping performances in four legendary Broadway musicals: The Wiz, Ain’t Misbehavin’, Play On! and The Full Monty. His numerous accolades include an Emmy Award for the NBC Special based on Ain’t Misbehavin’, the National Black Theatre Festival’s Living Legend Award, the Village Voice OBIE Award for Sustained Excellence of Performance and two Doctor of Fine Arts degrees honoris causa one each from the University of Wisconsin-Madison and the State University of New York-College at Buffalo. A triple Capricorn, Mr. De Shields is the ninth of eleven children born and reared in Baltimore, Maryland. www.andredeshields.com. 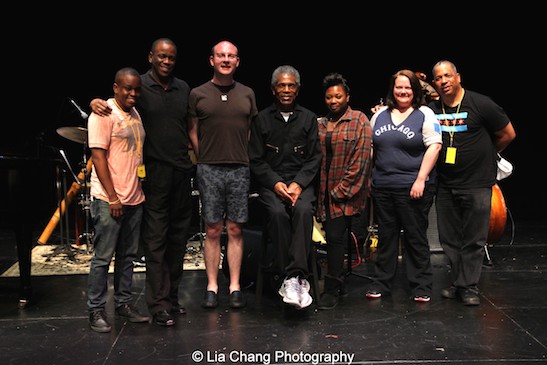 The IGNITION Festival of New Plays is an annual festival devoted to fostering a community of support for the development of outstanding new plays and nurturing relationships with emerging playwrights. Launched in 2008 with support from the Ford Foundation, IGNITION was designtaylored at that time to be a biennial festival focused on identifying emerging playwrights of color. Over the course of the festival, it has grown to become an annual festival that focuses on identifying exceptional emerging playwrights of any background who speak to contemporary ethnic, social, religious, generational and economic diversity. Since 2008, several plays were first discovered at Ignition and subsequently produced on the mainstage during a Victory Gardens season (…Chad Diety, Year Zero, We Are Proud to Present…, Appropriate, Samsara, Cocked, and Hillary and Clinton.)

Performances are at the Victory Gardens Biograph Theater, 2433 N. Lincoln Avenue, in the heart of Chicago’s Lincoln Park neighborhood. Admission to all festival readings and events is free, though an RSVP is required. For more information or to RSVP, visit www.victorygardens.org/ignition/ or call the Victory Gardens Box Office at 773.871.3000.