The Broadway community mourns the loss of Tony Award® – winning actor and Tony Award – nominated director, Roger Rees, who passed away on Friday at age 71, after a brief journey with cancer.  His husband, Rick Elice, and family and friends were at his side.

The marquees of Broadway theatres in New York will be dimmed in his memory on Wednesday, July 15th, at exactly 7:45pm for one minute. People will be gathering on W45th Street where his image can be seen on the marquees of some of the theaters. 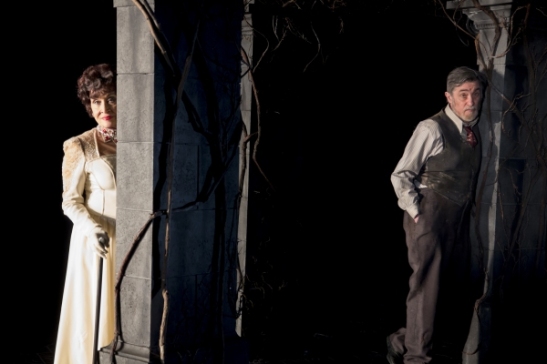 Chita Rivera and Roger Rees in the Broadway production of The Visit at The Lyceum. Photo by Thom Kaine

Charlotte St. Martin , President of the Broadway League, said, “We are so fortunate that Roger Rees has graced our stages through the years and inspired us with his brilliant talent. In addition to his acting and directing accomplishments, his generous heart and warm, giving spirit will be greatly missed by his family, friends and fans.”

Roger Rees began his career with the Royal Shakespeare Company and attended the Slade School of Fine Arts.

He played Malcolm in the acclaimed Trevor Nunn 1976 stage and 1978 television production of Macbeth, to great acclaim. 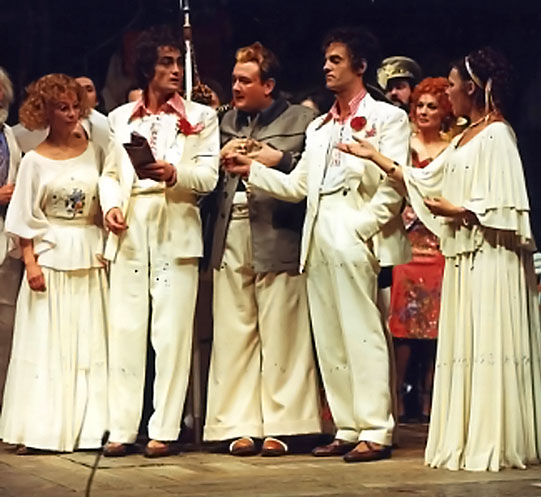 Most famously, Rees created the title role in the original production of The Life and Adventures of Nicholas Nickleby, David Edgar’s stage adaptation of the Dickens novel, winning both an Olivier Award for Actor of the year in a new play in 1980, and a Tony Award for Best Actor in a Play in 1982.

He also starred in the original production of The Real Thing by Tom Stoppard at the Strand Theatre in London in 1982.

Rees began to work in television during the 1970s, appearing opposite Laurence Olivier in “The Ebony Tower” (1984). From 1988 to 1991 he starred in the popular British sitcom “Singles,” with co-star Judy Loe. 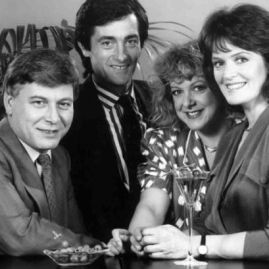 From 1989 to 1991 and in 1993, he also appeared intermittently on the long-running American TV series “Cheers” as the English tycoon Robin Colcord. Later television appearances include “My So-Called Life” as substitute teacher Mr. Racine, British Ambassador Lord John Marbury on “The West Wing” and James MacPherson on “Warehouse 13.”

His film career began in 1983 when Bob Fosse cast him to star in Star 80 opposite Mariel Hemingway. 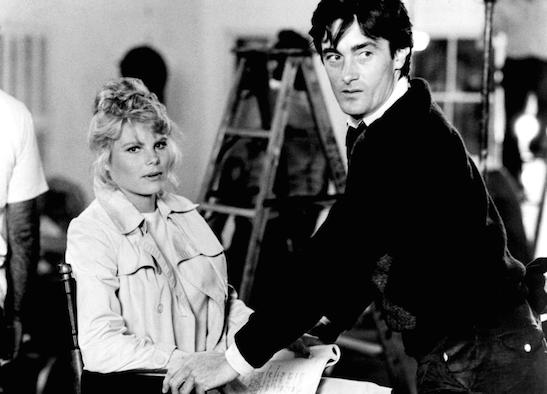 Rees played the Sheriff of Rottingham in Mel Brooks’ film, Robin Hood: Men in Tights (1993). Later film appearances include Frida (2002) and The Prestige (2006). 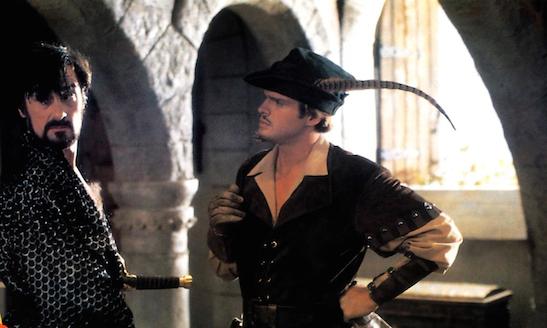 Continuing his work in the theatre through the 1990s, both as an actor and a director, Rees was awarded an Obie Award for his 1992 performance in the Off-Broadway play The End of the Day.

In 1995 he was nominated for a Tony Award for Best Actor in a Play for his role in Indiscretions. That same year, he also participated as narrator for the audiobook edition of “Memnoch the Devil” by Anne Rice. As for audiobooks, Rees performed in a wide variety of programs.

In November 2004, Rees was named Artistic Director of the Williamstown Theatre Festival, only the fourth person to hold the post in its half century history. 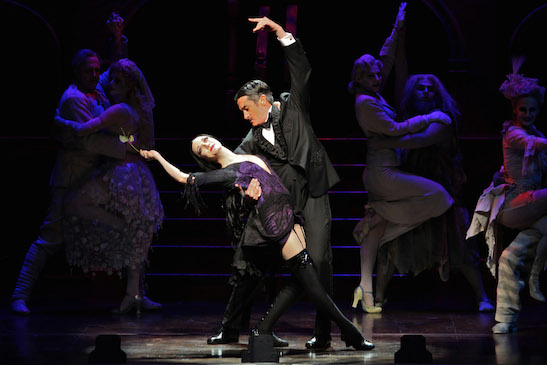 Bebe Neuwirth and Roger Rees in the Broadway production of The Addams Family in 2010.
Photo by Jeremy Daniel

He succeeded Nathan Lane in the role of Gomez in the Broadway musical adaptation of The Addams Family, on March 22, 2010 and was in the rest of the run. His last West End appearance was in the acclaimed production of Waiting for Godot opposite Ian McKellen at the Haymarket. They also toured the production globally, most memorably, to South Africa. 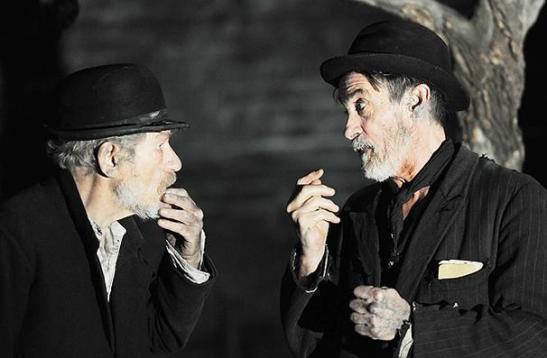 Sir Ian McKellen and Roger Rees in Waiting For Godot at the Haymarket in 2010. Credit: Sasha Gusov

Rees achieved acclaim as a noted stage director including Peter and the Starcatcher (along with Alex Timbers) which he developed, first at Williamstown Theatre Festival, then La Jolla Playhouse, and in New York at New York Theatre Workshop and on Broadway for which he received a Tony Award nomination for Best Director (the play won five Tony Awards).

He is survived by Mr. Elice. A private funeral service will be held next week.  A memorial tribute to Roger will be held in a Broadway Theatre sometime after Labor Day. And in his honor donations can be made to:

Gifts to the Roger Rees Permanent Memorial can be mailed to:
The Actors Fund
729 Seventh Avenue
New York NY 10019

Or by going to: https://donate.actorsfund.org/tribute
When you get to the site, go to the “type” prompt and click on Permanent Memorial, then enter Roger’s first and last name below.

Roger Rees and Chita Rivera in Kander and Ebb’s The Visit. Photo by Frank Ockenfels

Rees’ last Broadway appearance was the starring role of Anton Schell in The Visit, opposite Chita Rivera, which opened April 23, 2015. 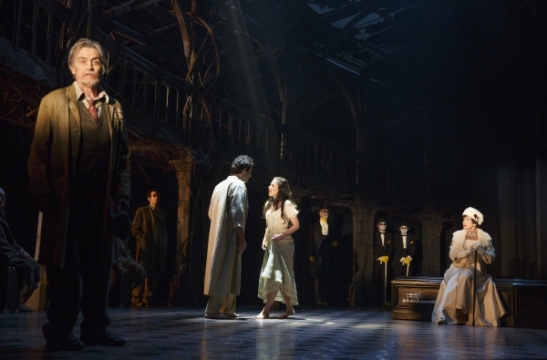 Frances Conroy and Rogers Rees in the Roundabout’s 1996 revival of Jean Anouilh’s The Rehearsal. Photo by Joan Marcus 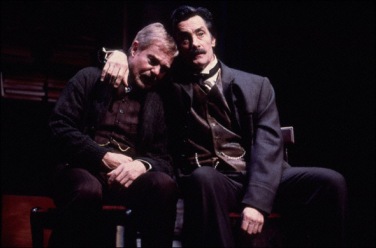 Derek Jacobi and Roger Rees in the Roundabout’s 2000 revival of Uncle Vanya. Photo by Joan Marcus.

“Roger was inspirational. He had the perpetual boyishness and mischief of a Peter Pan, extraordinary wit combined with a gift for self-satire, and dauntless optimism coupled with deep-rooted belief. All these ingredients went into his acting, and I am sure, into his directing, and gave him an aura of rare, generous spirited humanity. He was always superb at being just ‘one of the gang’ in the company, while equally deft at leading by example, leading by commitment. All this was sublimated in his Nicholas Nickleby, the giant success of which led him to change his life by moving to America. I spent a magical evening with him in New York only a few months ago. He talked of his illness – with optimism, with wit, with self-satire, and with deep-rooted belief … and once again, to be in his presence was inspirational.” 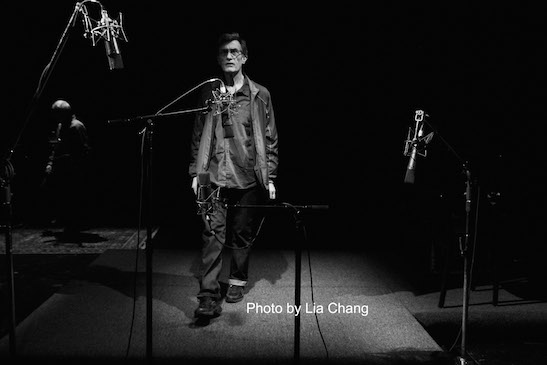 The Hollywood Reporter: Roger Rees, Star of ‘The Life and Adventures of Nicholas Nickleby,’ Dies at 71