Atlantic Theater Company’s world premiere of Pulitzer Prize® finalist Rajiv Joseph’s play Guards at the Taj, starring Tony Award® nominees Omar Metwally and Arian Moayed, and directed by Tony Award® nominated actor and director Amy Morton, opened to critical acclaim on June 11. The play began previews on May 20th and was scheduled to play a limited engagement through Sunday, June 28 Off Broadway at Atlantic Theater Company at The Linda Gross Theater (336 West 20th Street, but has been extended through July 12. Click here to purchase tickets.

In 1648 India, two Imperial Guards watch from their post as the sun rises for the first time on the newly-completed Taj Mahal – an event that shakes their respective worlds.

When they are ordered to perform an unthinkable task, the aftermath forces them to question the concept of friendship, beauty and duty, and changes them forever.

Check out what the critics are saying:

FRISKY, FUNNY DIALOGUE! Directed by Amy Morton with a RICH SENSE OF ATMOSPHERE that raises potent questions about the human price paid throughout history for the caprices of the mighty!” – The New York Times

“RIVETING! The most astounding brutal tableau you’ll ever see on stage! Beautifully illustrated by Metwally and Moayed who bring QUIET INTENSITY, FEROCITY, and UNBRIDLED EMOTION!
YOU WON’T BE ABLE TO LOOK AWAY FROM THESE TWO ACTORS!” – Entertainment Weekly 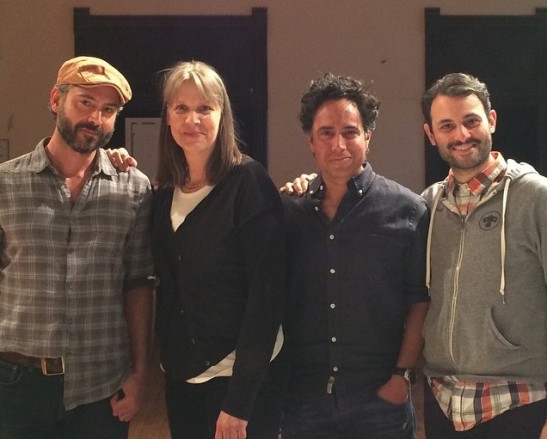 Steppenwolf Theatre Company member Amy Morton’s directing credits include The Way West, Penelope, Clybourne Park, American Buffalo, Glengarry Glen Ross, The Pillowman, Dublin Carol and Topdog/Underdog for the company. She received Tony® and Drama Desk award nominations for both her acclaimed performances in the most recent revival of Who’s Afraid of Virginia Woolf? and August: Osage County on Broadway in addition to appearing in over thirty Steppenwolf Theatre Company productions.

Rajiv Joseph‘s play Bengal Tiger at the Baghdad Zoo was a finalist for the Pulitzer Prize® and received a Drama Desk award nomination for Outstanding Play. His other plays include Gruesome Playground Injuries, Animals Out of Paper, The North Pool, The Lake Effect and Mr. Wolf. He is the librettist and co-lyricist for the musical, Fly. Joseph also wrote for the Showtime series “Nurse Jackie” for its third and fourth seasons and was the co- screenwriter of the film Draft Day, which was released last year, starring Kevin Costner and Jennifer Garner. Joseph received his B.A. in Creative Writing from Miami University and his M.F.A. in Playwriting from NYU’s Tisch School of the Arts. He served for three years in the Peace Corps in Senegal, West Africa. Joseph was named a 2010 Rockefeller Fellow by United States Artists. He is the recipient of the Lucille Lortel Award, the Whiting Award, the Glickman Award, the 2013 Equity Jeff Award for The Lake Effect, produced by Silk Road Rising in Chicago and the prestigious 2013 Steinberg Playwright Award from the Harold and Mimi Steinberg Charitable Trust. Joseph just returned from Morocco and the set of Army of One, a new film he co-wrote with Scott Rothman, loosely based on a GQ article by Chris Heath about Gary Faulkner, an ex-con who made 11 attempts to travel to the most volatile region of Pakistan to capture Osama bin Laden, armed with only a sword. Directed by Larry Charles (“Borat”), Army of One stars Nicholas Cage, Russell Brand, Denis O’Hare, Ken Marino, Paul Scheer, Wendi McLendon-Covey and Rainn Wilson. Click here to read the full article. In 2016, Opera Theatre of St. Louis will present the world premiere of composer Jack Perla and Joseph’s Shalimar the Clown, adapted from the novel by Salman Rushdie.

Atlantic Theater Company presents a conversation with Pulitzer Prize winning playwright Stephen Adly Guirgis (Between Riverside and Crazy) & Pulitzer Prize finalist Rajiv Joseph (Guards at the Taj). These two prolific creators of theater share the process of writing their stories and bringing them to the stage.

THE GET DOWN, Baz Luhrmann’s New Drama Series Set in 1970s NYC That Gave Birth to Hip-Hop, Punk and Disco, to Premiere on Netflix in 2016