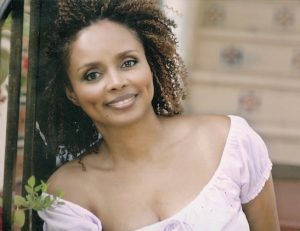 Debbi Morgan and Darnell Williams, who portrayed the iconic couple “Angie and Jesse” on the long running daytime television series “All My Children,” will serve as Celebrity Co-Chairs for the 2015 National Black Theatre Festival, August 3-8 in Winston-Salem, NC.

Connect with the Marvtastic passion, splendor and valor of the African and the African American cultures as Black Theatre takes center stage in Winston-Salem, NC over six exciting days.

Highlights include the Star Studded Opening Night Celebrity Gala, Theatre Productions, Readers’ Theatre of New Works/Plays, Theatre Workshops, International Colloquium (presented by NBTF, Winston-Salem State University and the Black Theatre Newtork), the Youth/Celebrity Project and Teen TeenTastic, films, seminars, a teen poetry slam and the International Vendor’s Market which features vendors and crafts from every corner of the globe and live entertainment. Don’t forget to buy a 2015 Souvenir Journal and learn more about the participating companies, the distinguished NBTF honorees, a map of the performance venues and much more.

A Chapman Roberts Concept, Inc., New York, NY
A soaring music and dance celebration of the glorious 100 year history of African Americans on Broadway and at Carnegie Hall, this Gala All Broadway Star Production is specifically designed to honor NBTF luminaries past and present. (Musical – General Audience) University of North Carolina School of the Arts Stevens Center

10:30pm – CELEBRITY RECEPTION
Mix and mingle with the honorees,celebrity guests and other theatre patrons. (Marriott Hotel)

Theatre Festival Play Schedule – A schedule of plays and events can be obtained by contacting the NBTF for a printed schedule or going online to NBTF.org. The schedule will include the play’s title, date, time, location and the play number. Some plays are performed several times during the week, so knowing the play number is very important.

Purchasing Tickets – Advance tickets may be purchased for the 2015 festival by calling the Festival box office at (336) 723-7907. These tickets will be mailed up to two weeks prior to the festival or picked up at the M.C. Benton Convention Center.

On Thursday, August 6, 2015, The Salute for the renowned Theatre historical icon the late Garland Lee Thompson Sr.will be held at the Hearn Grand Ballroom at the Marriott Winston Salem 425 North Cherry Street Winston Salem NC 27101. (change of venue because of popular demand)

To join the presenting committee, email your full name to ndove@hotmail.com or call 678-739-6674.

If you are interested in being one of the 1,500 volunteers for the National Black Theatre Festival, download a volunteer application from www.NBTF.org or call (336) 723-2266.

Visit www.NBTF.org for other festival hotels.

Festival History
Founded in Winston-Salem by the late Larry Leon Hamlin in 1989 and hosted by the North Carolina Black Repertory Company (NCBRC), NBTF is a biennial event with a purpose of uniting black theatre companies from around the world and ensuring the presence of this phenomenal genre. Mr. Leon Hamlin described the experience as “MARVTASTIC,” a combination of marvelous and fantastic! With the support of Dr. Maya Angelou, who served as the Festival’s first Chairperson, the National Black Theatre Festival was born. The ’89 Festival offered 30 performances by 17 of America’s best professional black theatre companies. It attracted national and international media coverage. According to The New York Times, “The 1989 National Black Theatre Festival was one of the most historic and culturally significant events in the history of black theatre and American theatre in general.” Over 10,000 people attended. Today that number reaches well over 65,000 attendees.

Ten years prior to starting the National Black Theatre Festival, Larry Leon Hamlin founded another black theater movement in Winston-Salem that is still present today. The North Carolina Black Repertory Company is the state’s first professional Black theater company. NCBRC is committed to introducing diverse audiences to Black classics, the development and production of new works, improving artistic quality, and sustaining Black theatre internationally. NCBRC was founded with the purpose of providing theatre professionals the opportunity to earn a living through their craft.

NCBRC presents three to four productions annually featuring members of its ensemble or through collaborations with other theatre companies from around the country. The annual Martin Luther King, Jr. Birthday Celebration and the holiday presentation of Langston Hughes’ Black Nativity have become two of the Company’s staples. The critically acclaimed NCBRC production, Mahalia, Queen of Gospel (written and directed by Mabel Robinson, the company’s Artistic Director) was a National Black Theatre Festival showcase performance.