Produced by Obibini Pictures, Bus Nut captures the story of Rosa Parks, the 1950s African-American civil activist often referred to as the “mother of the freedom movement.” Bus Nut re-articulates the 1955 Montgomery Bus Boycott, a political and social protest against US racial segregation on the public transit system of Montgomery Alabama and its relationship to an educational video on school bus safety. An actress re-stages a vintage video while reciting press conference audio of Rosa Parks on a recreated set in New York City.

Bus Nut is among seven shorts that will be shown including —The Summer of Gods; Burkina, All About Women;Handmade in Thamaga; Sister Oyo; Cholo; and Panic Button—by and about women.

Click here for more information and here to purchase tickets through Film Society of Lincoln Center.

Last fall, MaameYaa Boafo, who stars as Nana Yaa in the international hit web series, “An African City,” made her Off-Broadway debut as Tina Pardon in the New York premiere of acclaimed novelist Walter Mosley’s first full length play LIFT at 59E59 Theaters. She originated the role in the world premiere at Crossroads Theatre, with Marshall Jones, III, at the helm, in Spring 2014. 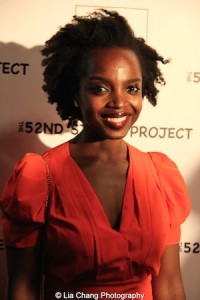 Boafo hails from Ghana, West Africa and was raised in Europe and East Africa before moving to the States for college. After obtaining a double Bachelor’s in Broadcast Journalism and French at Hood College in Frederick, Maryland, MaameYaa was then awarded the Levin Scholarship from Rutgers University, and received her MFA in Acting from the Mason Gross School of the Arts.