Due to popular demand, Theatre for A New Audience’s critically acclaimed production of Soho Rep.’s An Octoroon has been extended again and will play through March 29 at Theatre for a New Audience, Polonsky Shakespeare Center, 262 Ashland Place in Brooklyn.

Maechi Aharanwa, Danielle Davenport, and Pascale Armand in Theatre for a New Audience’s production of Soho Rep.’s AN OCTOROON by Branden Jacobs-Jenkins, directed by Sarah Benson. Photo by Gerry Goodstein 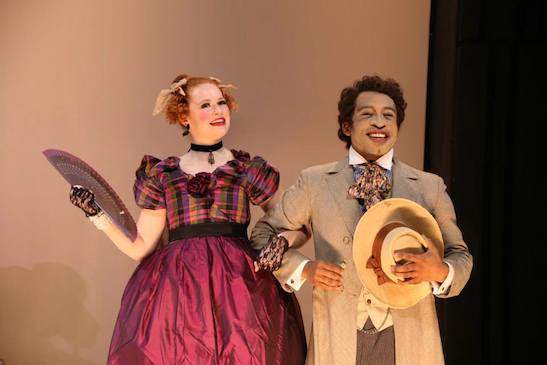 Mary Wiseman and Austin Smith in Theatre for a New Audience’s production of Soho Rep.’s AN OCTOROON by Branden Jacobs-Jenkins, directed by Sarah Benson. Photo by Gerry Goodstein

Click here for bios of the cast and creative team.

Haynes Thigpen, Austin Smith, and Amber Gray in Theatre for a New Audience’s production of Soho Rep.’s AN OCTOROON by Branden Jacobs-Jenkins, directed by Sarah Benson. Photo by Gerry Goodstein

Haynes Thigpen and Ian Lassiter in Theatre for a New Audience’s production of Soho Rep.’s AN OCTOROON by Branden Jacobs-Jenkins, directed by Sarah Benson. Photo by Gerry Goodstein

Soho Rep. originally produced the World Premiere of An Octoroon (Opening Night May 4, 2013). It was last season’s most exciting new play, winning two OBIE Awards, including Best New American Play. The New York Times called it then “exhilarating” and made it a Critic’s Pick, and the Wall Street Journal called it “one of the biggest hits of the season.” An Octoroon was also included in the Top Ten 2014 Best Theatre lists of The New York Times, Time Out New York, and The Guardian.

Mr. Jacobs-Jenkins takes on Dion Boucicault’s 1859 play, The Octoroon, about forbidden love and slavery in the American South and “uses the plot of the Irish playwright’s antebellum melodrama as the starting point for a bigger, wilder play” (The New Yorker).

In An Octoroon, Judge Peyton is dead, and his plantation, Terrebonne, is in financial ruins. Peyton’s handsome nephew George arrives as heir apparent, and quickly falls in love with Zoe, a beautiful “octoroon.” But, the evil overseer M’Closky has other plans­for both Terrebonne and Zoe.

BRANDEN JACOBS-JENKINS (Playwright). Branden’s plays include Appropriate (Obie Award; Outer Critics Circle nomination; Signature Theatre), Neighbors (The Public Theater), War (Yale Rep), and An Octoroon (Obie Award; Soho Rep). He is currently a Residency Five playwright at the Signature Theatre and a former Lila Acheson Wallace fellow at The Juilliard School. His work has been seen at Yale Rep, Actors Theatre of Louisville, Victory Gardens Theatre, Woolly Mammoth Theatre, Vineyard Theatre, Matrix Theatre in L.A., Mixed Blood Theatre is Minneapolis, CompanyOne in Boston and the HighTide Festival in the UK. He is under commissions from Lincoln Center/LCT3 and MTC. His honors include a Paula Vogel Award, a fellowship from the New York Foundation for the Arts and the inaugural Tennessee Williams award.

Single tickets, on sale now, are $60-$85 and may be purchased online at www.tfana.org, by phone at 866-811-4111, or in person at the Theatre for a New Audience Box Office (262 Ashland Place). Box office hours are Tuesday through Saturday, 1:00pm to 6:00pm. A limited number of premium seats are available for $100. New Deal tickets for ages 30 and under or full-time students of any age are priced at $20 each and can be purchased online, by phone, or in person at the box office. Subscriptions for Theatre for a New Audience’s 2014-2015 Season are $147 for a 3-play package and are available by calling (212) 229-2819, ext. 10. For information or to subscribe online, visit www.tfana.org. Performances are Tuesday through Sunday evenings at 7:30pm, with matinees on Saturdays and Sundays at 2:00pm.

All text, graphics, articles & photographs: © 2000-2015 Lia Chang Multimedia. All rights reserved. All materials contained on this site are protected by United States copyright law and may not be reproduced, distributed, transmitted, displayed, published or broadcast without the prior written permission of Lia Chang. You may not alter or remove any trademark, copyright or other notice from copies of the content. For permission, please contact Lia at liachangpr@gmail.com
—