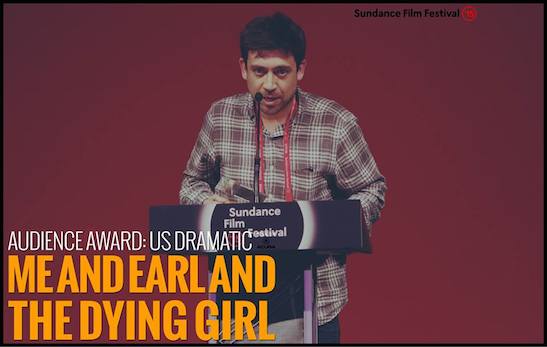 Greg is coasting through senior year of high school as anonymously as possible, avoiding social interactions like the plague while secretly making spirited, bizarre films with Earl, his only friend. But both his anonymity and friendship threaten to unravel when his mother forces him to befriend a classmate with leukemia. Cast: Thomas Mann, RJ Cyler, Olivia Cooke, Nick Offerman, Connie Britton, Molly Shannon.

Directing Award: U.S. Dramatic Robert Eggers, The Witch
(U.S., Canada)
New England in the 1630s: William and Katherine lead a devout Christian life with five children, homesteading on the edge of an impassable wilderness. When their newborn son vanishes and crops fail, the family turns on one another. Beyond their worst fears, a supernatural evil lurks in the nearby wood. Cast: Anya Taylor Joy, Ralph Ineson, Kate Dickie, Harvey Scrimshaw, Lucas Dawson, Ellie Grainger. 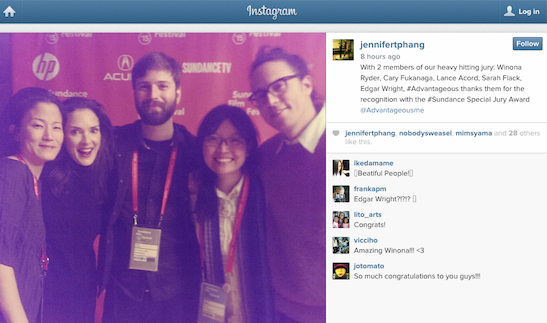 U.S. Dramatic Special Jury Award for Excellence in Cinematography Brandon Trost, The Diary of a Teenage Girl
Minnie Goetze is a 15-year-old aspiring comic-book artist, coming of age in the haze of the 1970s in San Francisco. Insatiably curious about the world around her, Minnie is a pretty typical teenage girl. Oh, except that she’s sleeping with her mother’s boyfriend. Cast: Bel Powley, Alexander Skarsgård, Christopher Meloni, Kristen Wiig. 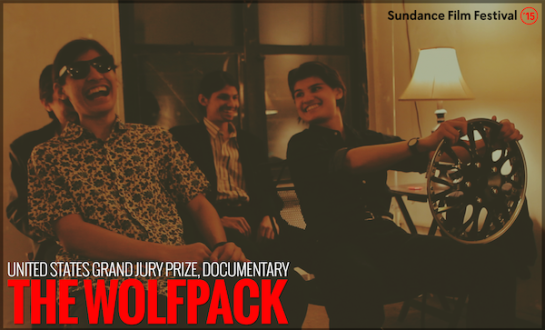 U.S. Grand Jury Prize: Documentary The Wolfpack
Crystal Moselle
Six bright teenage brothers have spent their entire lives locked away from society in a Manhattan housing project. All they know of the outside is gleaned from the movies they watch obsessively (and re-create meticulously). Yet as adolescence looms, they dream of escape, ever more urgently, into the beckoning world. U.S. Documentary Special Jury Award for Break Out First Feature Lyric R. Cabral, David Felix Sutcliffe, (T)ERROR
With unprecedented access to a covert counterterrorism sting, (T)error develops in real time, documenting the action as it unfolds on the ground. Viewers get an unfettered glimpse of the government’s counterterrorism tactics and the murky justifications behind them through the perspective of *******, a 63-year-old Black revolutionary turned FBI informant.

U.S. Documentary Special Jury Award for Vérité Filmmaking Bill Ross, Turner Ross, Western
For generations, all that distinguished Eagle Pass, Texas, from Piedras Negras, Mexico, was the Rio Grande. But when darkness descends upon these harmonious border towns, a cowboy and lawman face a new reality that threatens their way of life. Western portrays timeless American figures in the grip of unforgiving change.

World Cinema Grand Jury Prize: Documentary The Russian Woodpecker, UK
A Ukrainian victim of the Chernobyl nuclear disaster discovers a dark secret and must decide whether to risk his life by revealing it, amid growing clouds of revolution and war.

Directing Award: World Cinema Documentary Kim Longinotto, Dreamcatcher, (UK)
Dreamcatcher takes us into a hidden world seen through the eyes of one of its survivors, Brenda Myers-Powell. A former teenage prostitute, Brenda defied the odds to become a powerful advocate for change in her community. With warmth and humor, Brenda gives hope to those who have none.

World Cinema Documentary Special Jury Award for Editing Jim Scott, How To Change The World, (UK, Canada)
In 1971, a group of friends sails into a nuclear test zone, and their protest captures the world’s imagination. Using rare, archival footage that brings their extraordinary world to life, How to Change the World is the story of the pioneers who founded Greenpeace and defined the modern green movement.

World Cinema Grand Jury Prize: Dramatic Slow West, (UK, New Zealand)
Set at the end of the nineteenth century, 16-year-old Jay Cavendish journeys across the American frontier in search of the woman he loves. He is joined by Silas, a mysterious traveler, and hotly pursued by an outlaw along the way. Cast: Kodi Smit-McPhee, Michael Fassbender, Ben Mendelsohn, Caren Pistorius, Rory McCann.

Directing Award: World Cinema Dramatic Alanté Kavaïté, The Summer of Sangaile, (Lithuania, France, The Netherlands)
Seventeen-year-old Sangaile is fascinated by stunt planes. She meets a girl her age at the summer aeronautical show, near her parents’ lakeside villa. Sangaile allows Auste to discover her most intimate secret and, in the process, finds in her teenage love, the only person that truly encourages her to fly. Cast: Julija Steponaitytė, Aistė Diržiūtė.

World Cinema Dramatic Special Jury Award for Acting Regina Casé and Camila Márdila, The Second Mother, (Brazil)
Having left her daughter, Jessica, to be raised by relatives in the north of Brazil, Val works as a loving nanny in São Paulo. When Jessica arrives for a visit 13 years later, she confronts her mother’s slave-like attitude and everyone in the house is affected by her unexpected behavior. Cast: Regina Casé, Michel Joelsas, Camila Márdila, Karine Teles, Lourenço Mutarelli.

World Cinema Dramatic Special Jury Award for Cinematography Germain McMicking, Partisan, (Australia) — Alexander is like any other kid: playful, curious and naive. He is also a trained assassin. Raised in a hidden paradise, Alexander has grown up seeing the world filtered through his father, Gregori. As Alexander begins to think for himself, creeping fears take shape, and Gregori’s idyllic world unravels. Cast: Vincent Cassel, Jeremy Chabriel, Florence Mezzara.

Special Jury Award – Unparalleled Access – The Chinese Mayor, Hao Zhou, (China)
Mayor Geng Yanbo is determined to transform the coal-mining center of Datong, in China’s Shanxi province, into a tourism haven showcasing clean energy. In order to achieve that, however, he has to relocate 500,000 residences to make way for the restoration of the ancient city.

Audience Award: World Cinema Documentary Dark Horse,(UK)
The inspirational true story of a group of friends from a workingman’s club who decide to take on the elite “sport of kings” and breed themselves a racehorse.

Audience Award: World Cinema Dramatic Umrika, (India)
When a young village boy discovers that his brother, long believed to be in America, has actually gone missing, he begins to invent letters on his behalf to save their mother from heartbreak, all the while searching for him. Cast: Suraj Sharma, Tony Revolori, Smita Tambe, Adil Hussain, Rajesh Tailang, Prateik Babbar. 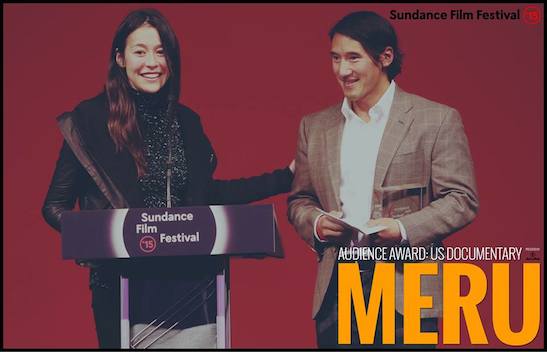 Short Film Grand Jury Prize World of Tomorrow, (U.S.)
A little girl is taken on a mind-bending tour of the distant future.

Short Film Jury Award: US Fiction SMILF, (U.S.)
A young single mother struggles to balance her old life of freedom with her new one as mom. It all comes to a head during one particular nap-time when Bridgette invites an old friend over for a visit.

Short Film Special Jury Award for Acting Back Alley, (France)
Suzanne, a prostitute for 15 years, has her turf, her regular johns, and her freedom. One day, however, young African prostitutes settle nearby, and she is threatened.

Short Film Special Jury Award for Visual Poetry Object, (Poland)
A creative image of an underwater search in the dimensions of two worlds — ice desert and under water — told from the point of view of the rescue team, of the diver, and of the ordinary people waiting on the shore.

Founded in 1981 by Robert Redford, Sundance Institute is a nonprofit organization that provides and preserves the space for artists in film, theatre, and new media to create and thrive. The Institute’s signature Labs, granting, and mentorship programs, dedicated to developing new work, take place throughout the year in the U.S. and internationally. The Sundance Film Festival and other public programs connect audiences to artists in igniting new ideas, discovering original voices, and building a community dedicated to independent storytelling. Sundance Institute has supported such projects as Beasts of the Southern Wild, Fruitvale Station, Sin Nombre, The Invisible War, The Square, Dirty Wars, Spring Awakening, A Gentleman’s Guide to Love and Murder and Fun Home. Join Sundance Institute on Facebook, Instagram, Twitter and YouTube.