Tony award-winner Lillias White (Fela!, The Life) stars as Osceola Mays, and Scott Wakefield (Hands on a Hardbody) as John Burrus in the world premiere of the new musical play, Texas in Paris, written by Alan Govenar featuring spirituals, cowboy songs and country hymns, at The York Theatre Company, presented  in association with Everyday Songs.

Lillias White as Osceola Mays and Scott Wakefield as John Burrus in Texas in Paris. Photo by Carol Rosegg

Texas in Paris began preview performances on January 28th and will continue through Sunday, March 1, 2015 at The York Theatre Company at Saint Peter’s (entrance on East 54th Street, just east of Lexington Avenue). Opening Night is Thursday, February 5, 2015 at 7:00 pm. 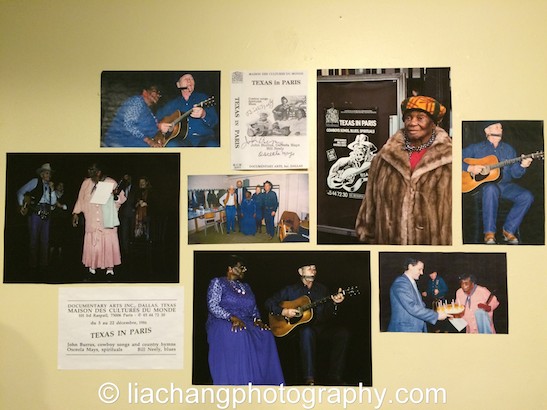 The world of TEXAS IN PARIS, based on recordings made by playwright Alan Govenar of Osceola Mays and John Burrus. Photo by Lia Chang

Akin Babatundé (Blind Lemon Blues) directs Texas in Paris, an intimate two-hander musical journey based on true events. In 1989, John Burrus (Scott Wakefield), a white man, and Osceola Mays (Lillias White), a black woman, have been invited to France to perform at the Maison des Cultures du Monde. The pair have never met, have no professional singing experience, and face the challenge of working together and co-existing in an unfamiliar world. Apprehensive of each other, they struggle with preconceptions but forge a surprising spiritual bond that transforms their on-stage performance and their lives. Texas in Paris is a conversation about race between two people who never thought they would ever have a conversation. With music supervision by Amy Jones.

“Texas in Paris is a metaphor for the dilemma of race that is currently dividing our nation, focusing on two people from the heartland, who like most Americans want to avoid talking about racism as an issue. But once in Paris a dialogue emerges that could never have happened in their isolated worlds in the United States,” stated playwright Alan Govenar. He went on to add, “The music is a songbook of American life – everyday songs, lost and found, black and white, remembered and discovered as new.” 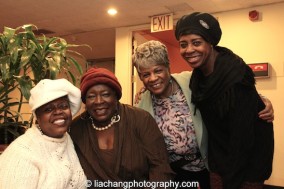 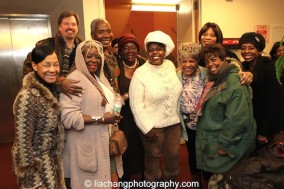 TEXAS IN PARIS stars Scott Wakefield and Lillias White with audience members at The York Theatre Company at Saint Peter’s in New York on January 29, 2015. Photo by Lia Chang 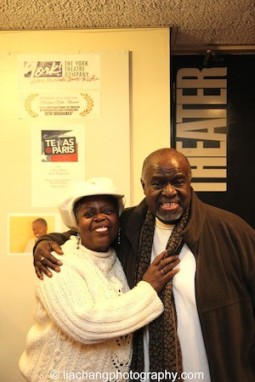 Check out the discount ticket codes below.

For groups 10+ Contact Marcia Pendelton at 646-467-7393 or by email at marcia@walktallgirlproductions.com.

Lillias White in Texas in Paris. Photo by Carol Rosegg

Lillias White is the quadruple-crown winner of the 1997-98 Drama Desk Award, Outer Critics Circle Award, Friends of New York Award and the Tony Award for Best Featured Actress in a Musical for her performance as Sonja in the Broadway musical Cy Coleman’s The Life. White’s latest accolade is an Outstanding Major Engagement Bistro Award for her exciting shows at 54 Below. Other Broadway credits include Funmilayo Anikulapo-Kuti in Fela! (Tony Award nomination), Jonesy in How to Succeed in Business Without Really Trying, Grizzabella in Cats, Asaka in Once on this Island, Joice Heth in Barnum (Broadway debut), Aretha Franklin in Rock-In-Roll-The First 5,000 Years, Effie Melody White in Dreamgirls (20th anniversary concert recording available on Nonesuch Records), Carrie and Chicago. Off Broadway, White was recently seen as Gertrude in Billy Porter’s While I Yet Live (Primary Stages); the Public Theater production of the William Finn musical Romance in Hard Times for which she won the Obie Award; Dinah Was at the Gramercy Theatre as singer Dinah Washington; Second Stage Theatre’s Crowns, for which she won the AUDELCO Award. On TV, White appeared on various PBS specials from “Great Performances with the Boston Pops” to “In Performance at The White House. White’s concert performances include Funny Girl, Hair, Dreamgirls, and South Pacific, which was broadcast on PBS Great Performances. She has appeared in concert at the Kennedy Center, Carnegie Hall, and Lincoln Center and has toured internationally with her one-woman show, From Brooklyn to Broadway. White’s television appearances include four seasons as Lillian Edward on “Sesame Street” where she garnered an Emmy Award, “Law and Order,” “Law and Order: SVU,” “NYPD Blue,” “Person of Interest,” and “Gotham.” Her screen credits include Lead Muse in Disney’s animated Hercules and Anastasia, How the Grinch Stole Christmas, Game 6, Pieces of April and Then She Found Me. Lillias White holds an honorary P.H.D. in Fine Arts from the City University of New York.

Scott Wakefield in Texas in Paris. Photo by Carol Rosegg

Scott Wakefield has appeared on Broadway in Hands On A Hardbody, Ring of Fire, and It Ain’t Nothin’ But The Blues. Off-Broadway appearances include The Joy Luck Club, The American Clock, Howling At The Moon, and Still Getting My Act Together (York). Numerous regional performances include: Fuddy Meers (Millet), A Flea in Her Ear (Camille), The Price (Victor), The Front Page (Kruger), The Glass Menagerie (Tom), Shipwrecked (Louis DeRougemont), Dancing At Lughnasa (Michael) and others at such prestigious venues as Cincinnati Playhouse, Milwaukee Repertory, Seattle Repertory, La Jolla Playhouse, and The Alliance Theatre. Mr Wakefield’s performances in The Will Rogers Follies and Best Little Whorehouse In Texas garnered him three “Best Actor” awards. Most recently, Mr. Wakefield performed in the new Broadway bound, Steve Martin musical, Bright Star, at The Old Globe Theater. Next up, Paint Your Wagon at The City Centre Theatre this March. An avid singer/songwriter, Scott has written and produced two CDs of original music: Older Than Dirt and Vegetarian Nightmare. www.ScottWakefield.com

Akin Babatundé is an accomplished actor, director, and writer whose theatrical career spans Off-Broadway, regional theatre, film and television. He has been a resident company member of prestigious theatrical institutions through the country: Trinity Rep (Providence, R.I.), Alley Theater (Houston, TX), La MaMa (NY) and the Dallas Theater Center. He is founder and artistic director of Vivid Theater Ensemble of Dallas and founder of Ebony Emeralds Classic Theater Company. Babatundé was the first African American to direct for the Dallas Shakespeare Festival in the celebrated diverse production of Taming of the Shrew in 1993. As a writer, his work has been commissioned by Florida Stage, La MaMa Theater, the Dallas Office of Cultural Affairs, Brown University, the Black Academy of Arts and Core Ensemble. His work Shakespeare – Midnight Echoes tours in Texas paying homage to black performing artists who performed Shakespeare from Slavery to the present. He has toured extensively with Core Ensemble in Of Ebony Embers-Vignettes of the Harlem Renaissance. His one-man show, Before the Second Set-A Visit with Satchmo has received critical acclaim at theater across the country. Babatundé co-wrote and starred in Blind Lemon Blues. TV appearances include “Law and Order” and “Wishbone,” the PBS literary show for children. Babatundé is a renowned arts educator, having undertaken five long-term artist residencies in underserved communities in Florida, creating new music theatre works alongside at-risk teens and community members. He holds a Master of Arts degree in Arts and Humanities from the University of Texas at Dallas and received the 2012 Distinguished Alumni Award.

Alan Govenar is a writer, folklorist, photographer and filmmaker. He is the director of Documentary Arts, a non-profit organization he founded in 1985 to present new perspectives on historical issues and diverse cultures. Govenar is a Guggenheim Fellow and the author of twenty-seven books, including “Everyday Music,” “Untold Glory: African Americans in Pursuit of Freedom,” “Opportunity and Achievement,” “Texas Blues: The Rise of Contemporary Sound,” “Lightin’ Hopkins: His Life and Blues,” “Stopin’ at the Savoy,” “Jasper, Texas: The Community Photographs of Alonzo Jordan,” and “Deep Ellum: The Other Side of Dallas.” His book “Osceola: Memories of a Sharecropper’s Daughter” won First Place in the New York Book Festival (Children’s Non-Fiction), a Boston Globe-Hornbook Honor, an Orbis Pictus Honor from the National Council of Teachers of English. Govenar’s film Stoney Knows How was shown at the Museum of Modern Art in New York and the Centre Georges Pompidou in Paris, and was selected as an Outstanding Film of the Year by the London Film Festival. Govenar has also produced and directed numerous films in association with NOVA, PBS, and La Sept/ARTE. His documentaries, The Beat Hotel, Master Qi and the Monkey King, and You Don’t Need Feet To Dance are distributed by First Run Features. Govenar co-wrote the musical Blind Lemon Blues, which was presented in its world premiere at the Forum Meyrin in Geneva and the Maison des Cultures du Monde in Paris, and was staged at the York Theatre in 2007 and 2009. www.documentaryarts.org.

The York Theatre Company is the only theater in New York City – and one of very few in the world- dedicated to developing and fully producing new musicals and preserving neglected, notable shows from the past. For four decades, York’s intimate, imaginative style of producing both original and neglected classic musicals has resulted in critical acclaim and recognition from artists and audiences alike. Under the guidance of Producing Artistic Director James Morgan since 1997, the York has focused exclusively on new musicals in its MainStage Series-most of them world, American, or New York premieres-by some of the field’s most esteemed creators, and has also helped launch the careers of many new talented writers. Over 35 cast recording from The York Theatre Company productions are now available on CD, and commercial transfers of such York premieres as The Musical of Musicals (The Musical!), Souvenir, Jolson & Company, and its acclaimed revivals of Closer Than Ever (2013 Off Broadway Alliance Award for Best Revival), Sweeney Todd and Pacific Overtures have all showcased the importance of the York and its programs.