The title DUTCHMAN is an allusion to The Dutch East India Company, the most renowned slave ship company of the 17th century, whose flagship for the voyages between West Africa and America, tradition says, was named Flying Dutchman. The literary legend is The Flying Dutchman in which the central character is ever in pursuit of prey that can never be caught. This production will include the music of Wagner’s The Flying Dutchman. Experimental, allegorical and angry, Dutchman is set on a New York City subway train, where Lula, a young white woman, strikes up a conversation with Clay, a young middle-class black man. As the play unspools, she goads him, with liberal righteousness, into releasing the anger that, as a black man, he must surely be harboring.

Woodie King Jr. explains the impact Amiri Baraka had on him: “Amiri Baraka and I shared a 50 year friendship. Shortly after I arrived in New York City, he came to see the play I was directing at St. Mark’s Church-in-the-Bowery. We had in common a close friendship with Langston Hughes and we both loved shoes and hats. Baraka was already a nationally recognized poet and respected editor of literary journals (where he published unknown writers alongside such comrades as Ginsberg, Corso, Ferlinghetti, Rivers, Rexroth and Kerouac). The success of Dutchman (produced by Edward Albee) marked him as a major playwright, Baraka moved uptown to Harlem to set up the Black Arts Repertory Theater. In the ’60s, American cities were in turmoil; Baraka’s poetry and essays defined that unrest. Baraka’s image blazed on front pages of newspapers across America and his poetry and plays fired up African Americans everywhere. In 1968, I began producing his plays: Great Goodness of Life (a Coon Show), Slaveship, The Toilet, A Recent Killing, Sidnee Poet Heroical, and Boy and Tarzan Meet Again in a Clearing (and produced It’s Nation Time – for the Motown label, Black Forum Records). He participated in my documentary Black Theater in America and co-edited anthologies with me. Baraka’s life and literary achievement as playwright should give us inspiration and courage, especially to African-American artists. He had incredible vigor and forcefulness. If one followed Baraka’s evolution from the Village in the mid -’50s, through jazz joints and cafes, to Harlem, where he denounced all the whites he had associated with up to that time (including his wife Hettie Jones), and embraced Black Nationalism. He moved to Newark where he founded the nationalist organization, Committee for a Unified Newark, and then into the 1970s, after absorbing W.E.B. Du Bois he announced he was adopting a Marxist philosophy.”

Amiri Baraka was born Everett LeRoi Jones in 1934 in Newark, NJ. After leaving Howard University and the Air Force, he moved to the Lower East Side in 1957 and co-edited the avant-garde literary magazine Yugen and founded Totem Press, which first published works by Allen Ginsberg, Jack Kerouac, and others. He published his first volume of poetry, Preface to a Twenty-Volume Suicide Note, in 1961 His Blues People: Negro Music in White America (1963) is still regarded as the seminal work on Afro-American music and culture. His reputation as a playwright was established with the production of Dutchman at Cherry Lane Theatre in March 1964. The controversial play won an Obie Award for Best Play and subsequently was made into a film. The play was revived by Cherry Lane Theatre in 2007 and has been produced around the world. In 1965, Jones moved to Harlem where he founded the Black Arts Repertory Theatre/School. BARTS lasted only one year but had a lasting influence on the direction of Afro American Arts. BARTS sent five trucks (for art, poetry, music drama) a day into the Harlem community, where performances would be given in vacant lots, playgrounds, and housing projects. In 1966, when BARTS was dissolved, Baraka returned to Newark, his hometown, and set up with his wife, Amina Baraka (who was a founder of Newark’s “Loft” a local venue of contemporary) The Spirit House and The Spirit House Movers, that brought drama, music and poetry from across the country. During this period, the Barakas founded The Committee for Unified Newark (CFUN) and The Congress of Afrikan People. Both CFUN and The Congress of Afrikan People led the election of Kenneth A. Gibson as the first Black Mayor of a major northeastern city. In 1968, Baraka co-edited Black Fire: Anthology of Afro-American Writing. Amiri and Amina Baraka edited The Music: Meditations of Jazz & Blues (Morrow) and Confirmation: An Anthology of African-American Women, which won an American Book Award from the Before Columbus Foundation. The Autobiography of LeRoi Jones/Amiri Baraka was published in 1984. His subsequent publications include Y’s/Why’s/Wise (3rd World 1992), Funk Lore (Littoral 1993), Eulogies (Marsilio, 1994), Transbluesency (Marsilio 1996), and Somebody Blew Up America & Other Poems (Nehesi 2002). Amiri and Amina Baraka founded Kimako’s Blues People, a multimedia arts space, from a small theater in their Newark home. Amiri founded the jazz/poetry ensemble Blue Ark which has played at the Berlin Festival, and throughout the US. His jazz opera Money, with Swiss composer George Gruntz, was performed in part at George Wein’s New York Jazz Festival in the early ’90s. Primitive World, with music by David Murray, was performed at Sweet Basil, the Nuyorican Café and the Black Drama Festival in Winston Salem, NC. His Bumpy: A Bopera with music by Max Roach was performed in 1991 at Newark Symphony Hall and at San Diego Repertory. Amiri founded the New Arkestra, a big band working to produce a living archive of this music. In the fall of 2002, Baraka, who had been named New Jersey Poet Laureate by then Governor James McGreevey, coming under fire from the Anti-Defamation League, the New Jersey Assembly and others after a reading of his controversial poem “Somebody Blew Up America” about the 9/11 attacks. After reading the poem at the Geraldine R. Dodge Foundation’s annual poetry festival in Stanhope, NJ, Baraka’s $10,000 stipend was rescinded and the Poet Laureate position eliminated in 2003 by Gov. McGreevey. In 2007, the U.S. Supreme Court refused to hear Baraka’s case in which he asserted that his First Amendment rights were violated. Baraka bounced back from the melee and remained a figure in demand at international festivals, book fairs and on university campuses. Baraka was the Poet Laureate of the Newark Public Schools appointed by former Superintendent Marion Bolden. Amiri Baraka’s numerous literary honors included fellowships from the Guggenheim Foundation and the National Endowment for the Arts, the PEN/Faulkner Award, the Rockefeller Foundation Award for Drama, the Langston Hughes Award from City College of New York, and a Lifetime Achievement Award from the Before Columbus Foundation. He was inducted into the American Academy of Arts & Letters in 1995. In 2002 he was named Poet Laureate of New Jersey and Newark Public Schools. His book of short stories, Tales of the Out and the Gone (Akashic Books) was published in late 2007. Home, his book of social essays, was re-released by Akashic Books in 2009. Digging: The Afro American Soul of American Classical Music (Univ. of California) was also released in 2009; the Before Columbus Foundation selected Digging as winner of their annual American Book Awards. His last book RAZOR: Revolutionary Art for Cultural Revolution was published in 2012. He died January 9th 2014.

Most Dangerous Man In America (W. E. B. Du Bois), Baraka’s final play, is a dramatic reflection of one of the most traumatic events in the terrible period of McCarthyism. W.E.B. DuBois, a co- founder of the NAACP and a scholar and political activist known and recognized throughout the world was indicted in 1951, by the US Federal Government as at the age of 82 as “an agent of a foreign power.” Throughout the play, the focus moves back and forth between the Harlem community and their opinions and the witnesses’ testimony and the courtroom battles. In this way we get a more balanced view of the interior narrative. Video stock footage of significant historical events and speeches will be part of the production design. Tickets will go on sale in April.

Woodie King Jr. is the Founder and Producing Director of New Federal Theatre. Woodie King Jr.’s New Federal Theatre has presented over 250 productions in its 42-year history. Mr. King has produced and directed on Broadway, Off-Broadway, in regional theatres, and in universities across the United States. He is the original producer of the ground breaking “choreopoem” For Colored Girls Who Have Considered Suicide When the Rainbow is Enuf, (The play was then co-produced by NFT with Joseph Papp’s Public Theatre). He also produced What the Wine Sellers Buy, Reggae and The Taking of Miss Janie (Drama Critics Circle Award). His directional credits are extensive and include work in film as well as theater. Mr. King was recently inducted into The Theater Hall of Fame for outstanding contribution to the American Theater. 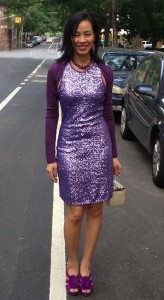 Lia Chang is an actor, a performance and fine art botanical photographer, and an award-winning multi-platform journalist. Lia starred as Carole Barbara in Lorey Hayes’ Power Play at the 2013 National Black Theatre Festival in Winston-Salem, N.C., with Pauletta Pearson Washington, Roscoe Orman, and made her jazz vocalist debut in Rome Neal’s Banana Puddin’ Jazz “LADY” at the Nuyorican Poets Cafe in New York. She is profiled in Jade Magazine.
All text, graphics, articles & photographs: © 2000-2015 Lia Chang Multimedia. All rights reserved. All materials contained on this site are protected by United States copyright law and may not be reproduced, distributed, transmitted, displayed, published or broadcast without the prior written permission of Lia Chang. You may not alter or remove any trademark, copyright or other notice from copies of the content. For permission, please contact Lia at liachangpr@gmail.com