“Between Riverside and Crazy: The triumphant return of Stephen Adly Guirgis, who startled Broadway in 2011 by snatching a Tony nomination for best play for a work with an unprintable title. This gleefully agnostic account of the things we do for real estate (at least when you’re poor and in unlikely possession of prime Manhattan property) blithely crossed the lines between good and bad, comedy and tragedy, faith and skepticism without missing a step. Austin Pendleton directed a wonderful cast led by Stephen McKinley Henderson.” 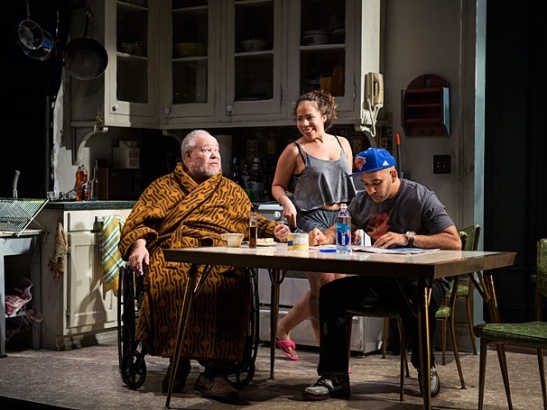 Stephen McKinley Henderson as Pops, Rosal Colon as Lulu & Victor Almanzar as Oswaldo in Between Riverside and Crazy. Photo by Kevin Thomas Garcia

Stephen McKinley Henderson, who received rave reviews for his lead performance as Walter “Pops” Washington, will return with the production. He was previously seen at Second Stage in August Wilson’s Jitney. Ron Cephas Jones joins other original cast members returning with the production include Victor Almanzar (Repertorio Espanol, LAByrinth Theater), Elizabeth Canavan (The Little Flower of East Orange), Rosal Colón (The Motherf*cker with the Hat) and Liza Colón-Zayas (Second Stage Theatre’s Water by the Spoonful and Living Out) and Michael Rispoli.

City Hall is demanding more than his signature, the Landlord wants him out, the liquor store is closed – and the Church won’t leave him alone. For ex-cop and recent widower Walter “Pops” Washington and his recently paroled son Junior, the struggle to hold on to one of the last great rent stabilized apartments on Riverside Drive collides with old wounds, sketchy new houseguests, and a final ultimatum in this dark comedy. For Pops and Junior, it seems the Old Days are dead and gone – after a lifetime living Between Riverside and Crazy.

“Part of Second Stage’s founding mission is to give deserving American plays a second chance to reach a wider audience. I was lucky enough to see Stephen’s remarkable play this summer and now I’m thrilled to bring it back and share it with theatregoers who couldn’t get a ticket during its sold out run,” says Artistic Director Carole Rothman. “An extraordinary combination of events have occurred to make this production a part of our season: an unexpected immediate opening in our line up and a brilliant play that was ready to be – and deserved to be – remounted for a larger audience. I couldn’t be happier bringing Stephen’s brilliant characters to life again and I know our audiences will be as knocked out by this play as I was.”

STEPHEN ADLY GUIRGIS (Playwright) is a member and former co-artistic director of LAByrinth Theater Company. His plays have been produced on five continents and throughout the United States. They include Our Lady of 121st Street (Drama Desk, Lucille Lortel, Outer Critics Circle Best Play Nominations), Jesus Hopped the ‘A’ Train (Edinburgh Festival Fringe First Award, Barrymore Award, Olivier Nomination for London’s Best New Play), In Arabia, We’d All Be Kings (2007 LA Drama Critics Best Play, Best Writing Award), The Last Days of Judas Iscariot (10 best Time Magazine & Entertainment Weekly), and The Little Flower of East Orange (with Ellen Burstyn & Michael Shannon). All five plays were directed by Philip Seymour Hoffman and were originally produced by LAByrinth. His most recent play, The Motherf***er with the Hat (6 Tony nominations, including Best Play), was directed by Anna D. Shapiro and marked his third consecutive world premiere co-production with The Public Theater and LAByrinth. In London, his plays have premiered at The Donmar Warehouse, The Almeida (dir: Rupert Goold), The Hampstead (Robert Delamere), and at The Arts Theater in the West End. Other plays include Den of Thieves (Labyrinth, HERE, HAI, Black Dahlia) and Dominica The Fat Ugly Ho (dir: Adam Rapp) for the 2006 E.S.T. Marathon. He has received the Yale Wyndham-Campbell Prize, a PEN/Laura Pels Award, a Whiting Award,  a TCG fellowship and the prestigious 2014 Steinberg Distinguished Playwright Award. He is also a New Dramatists Alumnae and a member of MCC’s Playwright’s Coalition, The Ojai Playwrights Festival, New River Dramatists, and Labyrinth Theater Company. As an actor, he has appeared in theater, film and television, including roles in Kenneth Lonergan’s film Margaret, Todd Solondz’s Palindromes, and Brett C Leonard’s Jailbait opposite Michael Pitt. A former violence prevention specialist and H.I.V. educator, he lives in New York City.