As I remember It was developed in residence at BAC.

This presentation of As I Remember It was made possible by the New England Foundation for the Arts’ National Dance Project.

Carmen de Lavallade has had an unparalleled career in dance, theater, film and television beginning in her hometown of Los Angeles performing with the Lester Horton Dance Theater—the first multi-race dance troupe in the United States. She persuaded a neighborhood friend named Alvin Ailey to join her in studying with Horton. While in Los Angeles, Lena Horne introduced the then 17-year-old Ms. de Lavallade to filmmakers at 20th Century Fox, where she appeared in movies with Dorothy Dandridge and Harry Belafonte. 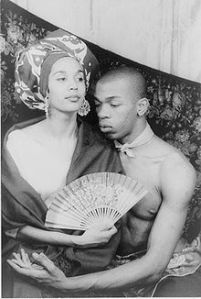 Ms. de Lavallade’s dance career includes ballets created for her by Lester Horton, Geoffrey Holder, Alvin Ailey, Glen Tetley, John Butler, and Agnes de Mille. She succeeded her cousin Janet Collins as the principal dancer with the Metropolitan Opera, becoming the second black dancer to perform on that stage, and was a guest artist with the American Ballet Theater. She has choreographed for the Dance Theatre of Harlem, Philadanco, the Alvin Ailey American Dance Theater, and productions of Porgy and Bess and Die Meistersinger at the Metropolitan Opera. Ms. de Lavallade also has had an extensive acting career as a member of the Yale Repertory Theatre and the American Repertory Theatre at Harvard, performing in numerous off-Broadway productions, and serving as an instructor at the Yale School of Drama where she taught many up and coming “super stars,” including Meryl Streep and Henry Winkler. Ms. de Lavallade and her husband, the late Geoffrey Holder, were the subjects of the film Carmen & Geoffrey (2005). In 1954, Ms. de Lavallade made her Broadway debut partnered with Alvin Ailey in Truman Capote’s House of Flowers. Her most recent theatrical work includes Step-Mother by Ruby Dee (2009), Post Black by Regina Taylor (2011), and the Broadway revival of A Streetcar Named Desire (2012). In 1999, she was named one of America’s 100 Irreplaceable Dance Treasures by Dance Heritage Coalition.