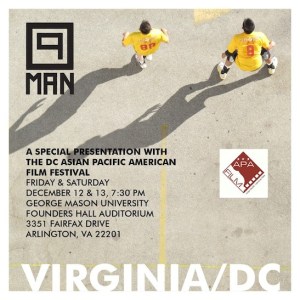 Tickets are $12 online before Dec 12, and $15 at the Door. Click here to purchase tickets.

The line for Ursula Liang’s 9-Man at the DOC NYC Festival at SVA Theater in New York on November 15, 2014. Photo by Lia Chang

I caught Ursula Liang’s 9-Man at a packed screening at the DOC NYC Festival at SVA Theater in New York on November 15, 2014, and it was worth the wait. By chance, I found myself in line behind 9-Man players Paul Chin and Patrick “2E” Chin, two brothers featured in the film, who joined Liang onstage after the screening for a Q & A. 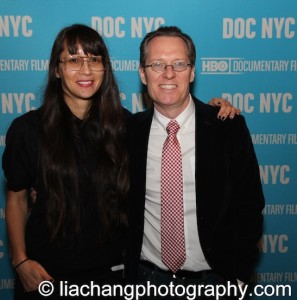 A consummate storyteller, Liang’s  documentary filmmaking debut with 9-Man is first rate –a thrilling fast paced ride that introduces the audience to the isolated and exceptionally athletic Chinese-American sport (Volleyball), that’s much more than a pastime.

Liang’s brother played 9-Man, and her intimate knowledge and enthusiasm for the sport is evident in her celebration of the athleticism of Chinese American men, portrayed in a way that I have rarely witnessed on screen. 9-Man also features a comprehensive look at the history of discrimination against Chinese Americans in the United States. I laughed, I cried, and I look forward to sharing the film with many others once it is released on DVD.

Since the 1930’s, young men have played this gritty, streetball game competitively in the alleys and parking lots of Chinatown. When the community was a Bachelor Society (men outnumbered women 4-to-1) at a time when anti-Chinese sentiment and laws like the Chinese Exclusion Act forced Chinese restaurant workers and laundrymen to socialize exclusively amongst themselves, nine-man offered both escape and fraternity for men who were separated from their families in China and facing extreme discrimination and distrust. Today, some 80 years later, nine-man is a lasting connection to Chinatown for a community of men who know a different, more integrated America and it’s a game that has grown exponentially in athleticism. Nine-man punctuates each summer with a vibrant, aggressive, exhausting bragging-rights tournament that unites thousands of Chinese-Americans and maintains traditional rules and customs. 9-Man introduces the history of the game and a diverse cast of modern-day characters — from 6’7″ Olympian Kevin Wong to a 91-year-old pioneer — combining vérité footage and interviews with never before seen archival footage and photos sourced directly from the community. Pivoting between oil-spotted Chinatown parking lots and jellyfish-filled banquet scenes, the film captures the spirit of nine-man as players not only battle for a championship but fight to preserve a sport that holds so much history.

9-Man filmmaker Ursula Liang with AiYoung Choi and guests at the DOC NYC Festival at SVA Theater in New York on November 15, 2014. Photo by Lia Chang

Click below for my photo slideshow of Liang’s 9-Man screening at the DOC NYC Festival at SVA Theater in New York on November 15, 2014.

URSULA LIANG (Director, Producer, Director of Photography) is a journalist who has told stories in a wide range of media. A former staff editor at T: The New York Times Style Magazine; and writer/reporter at ESPN The Magazine. Liang was a host of the radio program Asia Pacific Forum on WBAI, associate producer for the Emmy-nominated documentary, “Wo Ai Ni Mommy”, producer for the Emmy-nominated Asian American TV show “Stir”, and sports editor for the Asian-American magazine, Hyphen. She recently produced for Fuel’s “UFC Countdown”, FX’s “UFC Primetime” and the independent documentary “Fighting Foster”. Liang grew up in Newton, MA and lives in The Bronx, NY. Her brother played 9-Man. www.9-man.com

Proceeds go to DC Asian Pacific American Film and the producer/director of the documentary, Ursula Liang

“…this film gutted me. I was at the edge of my seat, really WITH every character. Loving them, routing for them, on their journey.” -Ariel Schudson, Sinamatic Salve-ation