This fall, Diane Phelan joined the cast of The Public Theater’s production of David Byrne and Fat Boy Slim’s smash hit musical, Here Lies Love, as the stand by for the role of Imelda. On December 3rd, Phelan will be featured as the “Men Will Do Anything” soloist. 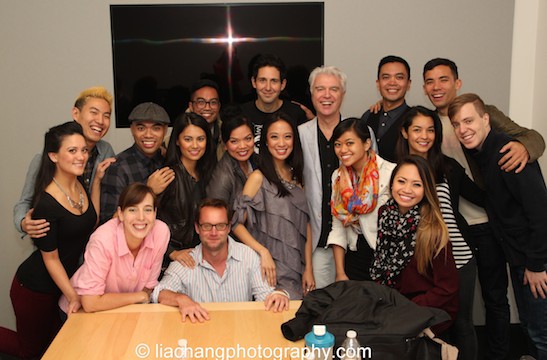 Tickets for Here Lies Love range from $99-$139. A limited number of $40 day-of-performance rush tickets will be available at The Public’s Taub Box Office (425 Lafayette Street, NYC) one hour before the start of each performance.  The Fall performance schedule is as follows: Mondays and Tuesdays at 7 pm, Wednesdays and Thursdays at 8 pm, Fridays at 7 pm and 10:30 (the Late Night Disco!) and Saturdays at 5 pm and 9:30 pm. Tickets subject to availability, and the offer is good for two tickets per person, cash or credit cards. For more info and tickets to Here Lies Love, please visit http://www.herelieslove.com/.

Diane Phelan made her New York debut at Lincoln Center Theater in Michael John LaChiusa’s Bernarda Alba, and will make her Broadway debut in Lincoln Center Theater’s revival of The King and I, starring Ken Watanabe and Kelli O’Hara, covering the role of Tuptim. Performances begin Thursday, March 12, 2015, and the show opens on Thursday, April 16, 2015 at the Vivian Beaumont Theater in New York.

“SO thrilled to be making my *official* Broadway debut with a show so dear to me. *(I still count LCT’s Bernard Alba even though we were downstairs;)!) The King and I was my first professional show out of college as well as one of the very first musicals I did as a teeny royal child. I remember looking up at Tuptim saying to myself, “I’m going to be her when I grow up”. I’m beyond excited to cover the role ON BROADWAY. What?! Dreams come true…,” shared Phelan on her Facebook page.

Raised as an expat in Taipei, Phelan began her music studies early after admission into the preeminent school for musicians in Taiwan. She went on to study voice and acting at New York University.

In the international arena, Phelan has played the role of Maria in West Side Story at the Théâtre du Chatelet in Paris, and Bopha in the world premiere of Where Elephants Weep in Phnom Penh. It was filmed and televised nationally in Cambodia then banned by the censors before a third airing.

David Byrne at the Here Lies Love event at the Apple Store Soho in New York on October 25, 2014. Photo by Lia Chang

Here Lies Love was conceived by David Byrne, and features lyrics by Byrne, music by Byrne and Fatboy Slim, additional music by Tom Gandey and J Pardo, and choreography by Annie-B Parson.

Within a pulsating dance club atmosphere, David Byrne and Fatboy Slim deconstruct the astonishing journey of Filipina First Lady Imelda Marcos retracing her meteoric rise to power and subsequent descent into infamy and disgrace at the end of the People Power Revolution. Here Lies Love is neither a period piece nor a biography, neither a play nor a traditional musical but an immersive theatrical event combining songs influenced by four decades of dance music, adrenaline-fueled choreography, and a remarkable 360-degree scenic and video environment to go beyond Imelda’s near-mythic obsession with shoes and explore the tragic consequences of the abuse of power. Here Lies Love is a 90-minute theatrical experience. Set within a dance club atmosphere, audiences stand and move with the actors.

The new production of Here Lies Love at London’s National Theatre won the London Evening Standard‘s Beyond Theatre award for pushing the boundaries of musicals, and has performances through January 8, 2015. Here Lies Love will open in Sydney in May 2015 as the theatrical center piece of the Vivid Festival. Click here to read about the Sydney production.

Lia Chang is an actor, a performance and fine art botanical photographer, and an award-winning multi-platform journalist. Lia made her jazz vocalist debut in Rome Neal’s Banana Puddin’ Jazz “LADY” at the Nuyorican Poets Cafe in New York.