YELLOW SOUND LABEL will release Herringbone, the two-disc solo CD debut by Tony Award-winner BD Wong. The unique concert album marks the recording premiere of the marvelously spooky one-man Off-Broadway musical, which features book by Tom Cone, music by Skip Kennon and lyrics by Ellen Fitzhugh (based on the play by Tom Cone), with Wong playing twelve characters. It was recorded live at a special event at Dixon Place in New York City. The album – produced by Scott Lehrer with Emmy Award-winner and Grammy Award-nominee Michael Croiter (Matilda, Big Fish, Heathers) serving as executive producer and Dan Lipton as musical director and associate producer – will be available online and in stores December 2. Pre-order the album at Amazon.com.

Wong has headlined four critically-acclaimed productions of the ambitious musical – the Williamstown Theatre Festival (2007), McCarter Theatre (2008), and La Jolla Playhouse (2009), all directed by Tony Award-winner Roger Rees (Nicholas Nickleby, Peter and the Starcatcher). He also starred in a production directed by Kenneth Elliott at the American Music Theatre Festival in 1994.

Herringbone was first produced in New York at Playwrights Horizons in a memorable 1982 production starring David Rounds. The Dixon Place production marked Wong’s first New York appearance in the show, timed with the 30th Anniversary of the original New York production. The conceit of a single performer enacting all of the characters underlines its theme of the human struggle to negotiate both light and dark sides within. This remarkable recording highlights Wong’s effortless multi-character performance, which is not only hauntingly compelling, but astonishingly clear.

BD Wong Creates Kickstarter Campaign for his Live Concert Recording of HERRINGBONE, to be performed May 21-22 as a Benefit for Dixon Place

BD Wong to Star in Live Concert Recording of HERRINGBONE for Two Nights Only as a Benefit for Dixon Place, May 21-22 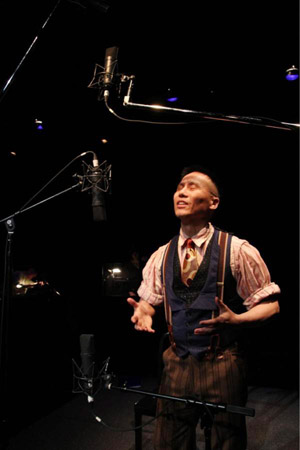 BD Wong, star of Herringbone, in rehearsal at Dixon Place in New York on May 20, 2012. Photo by Lia Chang

Wong plays the narrator George Herringbone, eight-year-old George, his parents Arthur and Louise, his Grandmother, his dance teacher, a vaudevillian dwarf hoofer, a floozie hotel clerk, and other supporting characters.

Reprising their work on this project from the other productions were Darren Lee (choreography), Dan Lipton (music direction), Scott Lehrer and Leon Rothenberg (sound design), and William Ivey Long (costumes).

The Boston Globe raved that “Wong fulfills the play’s intent: to make us reflect on how all of us build our sense of ourselves, are possessed by the characters in our lives, and somehow, if we’re lucky, manage to live a real life anyway…What most amazes us in Herringbone is not the dazzling trickery of its surface, but the poignant tenderness and full humanity of its unexpected depths.”

BD WONG won the Drama Desk, Outer Critics Circle, Clarence Derwent, Theater World and Tony Awards for his performance in M. Butterfly. He has appeared in more than 20 films and on television in six seasons of HBO’s “OZ,” eleven seasons of “Law and Order: SVU,” and the critically-acclaimed NBC drama “Awake.” He plays very different roles in the upcoming films Focus starring Will Smith, and Jurassic World, starring Bryce Dallas Howard and Chris Pratt.