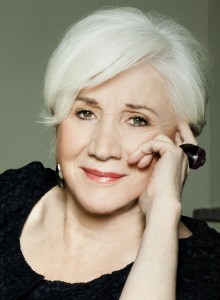 LA MAMA will honor award-winning Olympia Dukakis for her creative achievement in the arts and her work as an activist for social change; and Skadden, Arps, Slate, Meagher & Flom partner Dan Kurtz for his steadfast advocacy on behalf of nonprofit organizations at the La MaMa Earth Gala on Thursday, November 13th. Guests Include Austin Pendleton (who will toast Olympia), John Patrick Shanley, Matt Dillon, among others.

Proceeds from the benefit will greatly assist La MaMa in producing its 53rd season of diverse and innovative work. In announcing the gala, Artistic Director Mia Yoo stated, “At La MaMa, we are expressing a worldview through the artists we present and the community we serve. All voices need to be heard. La MaMa Earth is our theme this season and we are focusing on work that raises awareness about global ecology and issues of social justice and that is why we are thrilled to be honoring Dan Kurtz and Olympia Dukakis for their work and support of human rights and social and the environment.”

Gala performances will feature Reg E. Cathey (“House of Cards,” “The Wire”); The La MaMa Cantata just back from their tour through Turkey and Macedonia; and Lois Weaver of Split Britches as her alter ego Tammy WhyNot. Olympia Dukakis’s son, Stefan Zoric, will perform in tribute to his mother, with Al Ramos. Daniel Koren. Gala directed by Everett Quinton. Celebrity Auctioneer from Heritage Auctions Kathleen Guzman. Additional performances to be announced.

Founded by Ellen Stewart in 1961, La MaMa is recognized as the seedbed of new work by artists of all nations and cultures. It is the place where emerging artists learn from established artists and where artists from around the globe share work and ideas. To date, La MaMa has presented artists from over 70 nations. Each season, La MaMa offers more than 100 presentations and reach an audience of more than 32,000 people of all ages and all backgrounds.