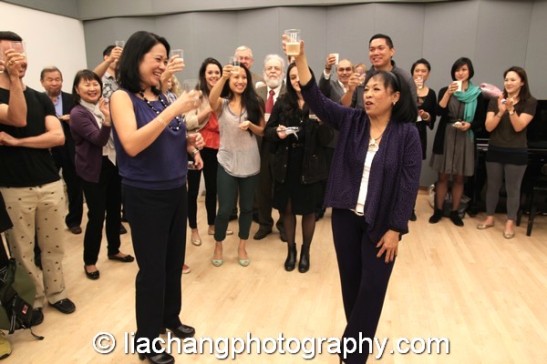 2014 Paul Robeson Citation Award recipient Baayork Lee is the toast of the town at the Actors Equity Association in New York on October 10, 2014. Photo by Lia Chang

“Baayork Lee has long been a role model and mentor in the Broadway and Asian American communities – and one of my own personal heroes for longer than I’ll ever admit to in public,” said AEA Councillor and co-chair of EEO committee Christine Toy Johnson, who presented Lee with the 2014 Paul Robeson Citation Award, presented by Actors’ Equity Foundation, at the beginning of AEA’s membership meeting on Friday, October 10, 2014, at the Actors Equity Building in New York. 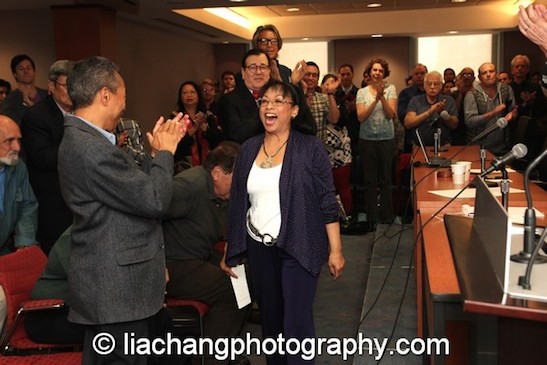 Lee was the toast of the town with Tommy Tune, Bob Avian, Lee Roy Reams, Orville Mendoza, Lori Tan Chinn, Raul Aranas, Anthony Wayne, Dana Ivey and Nick Wyman, President, Actors Equity Association, in the audience which collectively  leapt to their feet as she made her way to the podium to accept the 2014 Paul Robeson Citation Award.

Created in 1971, the Paul Robeson Citation Award honors individuals or organizations that best exemplify and practice the principles to which Mr. Robeson devoted his life: dedication to the universal brotherhood of all humankind, commitment to the freedom of conscience and of expression, belief in the artist’s responsibility to society, respect for the dignity of the individual and concern for and service to all humans of any race or nationality. Previous recipients include:Paul Robeson; Ossie Davis and Ruby Dee; Pete Seeger; Harry Belafonte; Studs Terkel; Lena Horne; Joe Papp; Maya Angelou; Bill Cosby; Sidney Poitier and, in 2013, Shauneille Perry.

Lee, an Asian American actor, dancer, singer, choreographer, director and author, was born in New York City’s Chinatown to an Indian mother and Chinese father, made her Broadway debut at the age of five as “Princess Ying Yaowalak” in the 1951 original production of The King and I. Her dream was to become a ballerina and she appeared in George Balanchine’s production of The Nutcracker, but this dream was dashed when she achieved her full height of just four feet, ten inches. In 1958, she returned to Broadway in Rodgers and Hammerstein’s Flower Drum Song. Other Broadway appearances were in Bravo Giovanni; Mr. President; Here’s Love; Golden Boy; A Joyful Noise; Henry, Sweet Henry; Promises, Promises; Seesaw and Michael Bennett’s groundbreaking production of A Chorus Line, in which she originated the role of “Connie.”

Baayork Lee (playing Miss Wong in this clip from the 1969 Tony Awards) created the role of Connie in A Chorus Line, and in fact has made a career of recreating Bennett’s choreography. Photo credit: Martha Swope on Armchair Actorvist

“For most of her performing career, she was one of the only Asian American performers working consistently on Broadway, breaking color barriers over and over again,” said Johnson.

“I first met Baayork when she was appearing in A Chorus Line on Broadway and I was a young girl growing up in Westchester County,” said Johnson. “I wrote her a fan letter, asking if I could interview her for a grade school paper I was assigned to write on role models. Imagine how thrilled I was to get her response! She arranged to meet me in between shows one Saturday afternoon at the legendary “Ted Hook’s Backstage” (which is now a “gentleman’s club” called “Private Eyes” – conveniently, or inconveniently, situated directly below Broadway Dance Center) – me with my gigantic tape recorder. After a wonderful meal, she took me back stage at the Shubert, set me up to watch that evening’s show from the sound console and has stayed in touch ever since, instilling in me the profound importance of hard work, perseverance and giving back to your community – all of which she lives by.”

Lee also has choreographed and directed scores of national and international tours of, among others, The King and I; Bombay Dreams; Rodgers and Hammerstein’s Cinderella; Porgy and Bess; Jesus Christ Superstar, Carmen Jones and Miss Saigon. In addition, she has choreographed several productions for the Washington National Opera at the Kennedy Center, been a talent scout for Tokyo Disneyland and opened a musical theatre school in Seoul, South Korea. She was the recipient of the 2003 Lifetime Achievement Asian Woman Warrior Award from Columbia College in Chicago.

“Baayork continues to spread the good word of old school dedication & hard work (never calling out unless dead), while directing and choreographing all over the world, always with an eye towards multi-culturalism and reflecting our diverse society on our stages,” said Johnson.

Nina Zoie Lam, Baayork Lee and Steven Eng, the founders of NAAP onstage before the performance of Oliver!, at The Romulus Linney Courtyard Theatre  inside The Pershing Square Signature Center in New York on June 7, 2014. Photo by Lia Chang
“In 2009, she founded (with Steven Eng and Nina Zoie Lam), the National Asian Artists Project. Though NAAP focuses on providing opportunities for the Asian American artistic community to grow, under Baayork’s leadership, bridges are continually being built between communities of all races and ethnicities. Through their productions with all Asian American casts of Oklahoma, Carousel, Oliver –I got to play “Dolly Levi” in Hello, Dolly! for heaven’s sake – NAAP is giving audiences the chance to see Asian American faces in the canon of classic American musical theatre,” said Johnson. 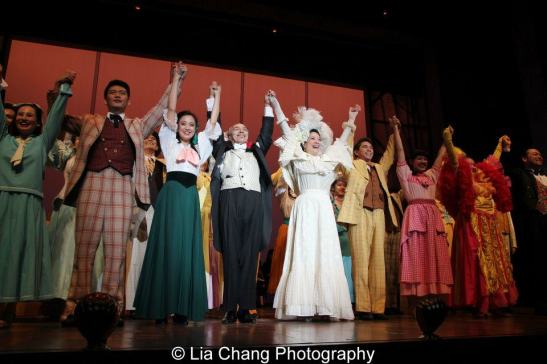 In their “Discover: New Musicals Series”, where they present new works with all Asian American casts, they’re again giving audiences, and writers, an opportunity to see Asian American faces included in the worlds of their plays. The work they do with their Community Choir, with children and seniors in Chinatown – too much to mention here…(please check out their website, www.naaproject.org and support them)…all of these add up to do what Baayork refers to, in loving spirit, as “making a difference”. And they do. 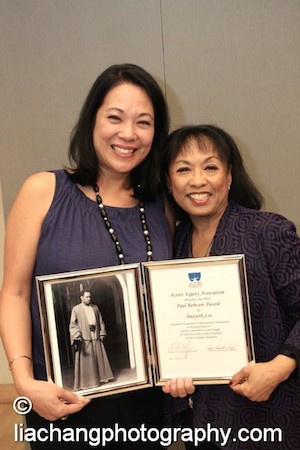 Christine Toy Johnson presented Baayork Lee with the 2014 Paul Robeson Citation Award presented by the Actors’ Equity Foundation in the council room of the Actors Equity Association on October 10, 2014. Photo by Lia Chang

Baayork’s deep commitment to fostering Asian American artists, giving us opportunities to become an integral part of the American landscape of storytelling, and continuing to find ways of creating new world views of inclusion – beautifully and totally exemplify the spirit of the work done by Paul Robeson.

It is my deep honor and joy to present Baayork Lee the 2014 Paul Robeson Citation Award.”

Below are excerpts from Baayork Lee’s acceptance speech.
Thank you Christine. Thank you to the committee for voting for me. This award is truly humbling. To be in the same company as Ossie Davis, Ruby Dee, Joseph Papp, Maya Angelou and many others –OMG! (big laugh) I can’t believe I’m standing here and I think I’m having an out-of-body experience.

So it all started at 5 years old when I saw the red velvet seats and the huge chandelier at the St. James Theater. I loved going to the theater and seeing all the people in the theater, especially those who inspired me and gave me the passion so needed to continue in this business. I want it. I want it. I will have it. If they will take me. I will be here. And I got it. 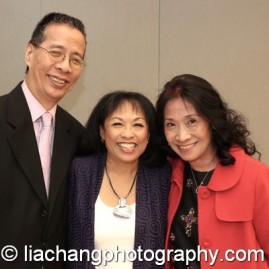 2014 Paul Robeson Citation Award recipient Baayork Lee with her cousin Chester Lee and his wife Rosanna at the Actors Equity Association in New York on October 10, 2014. Photo by Lia Chang
I wouldn’t be standing here without thanking so many people. And the first person is my brother Auchee. Because his job was to take me home from dancing school every day and he couldn’t do anything else, because he had a job. He used to take me home from dancing school or the theater. Thank you. And he makes me pay for it every day. And then there’s my cousin Chester who has been with me through thick – weddings, deaths, ups and downs, and at the opening night of A Chorus Line, he said, “Hey B, you’d better be good ‘cause all of Chinatown is depending on you. Pressure! 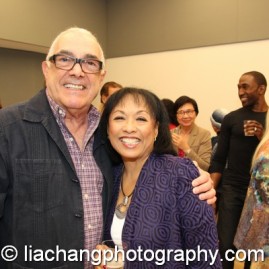 Lee Roy Reams and Baayork Lee. Photo by Lia Chang
And then there’s my beloved Syvilla Fort, my first dancing teacher and mentor, who taught me the discipline that you need in the business. And there’s Yuriko who I watched. There’s Michael Bennett and Bob Avian who took me under their wings and gave me the tools to fly. And 39 years later, I’m still flying. Thank you Bob.

Mr. Roman Terleckyj who introduced me to the world of opera and for 18 years, made me the resident choreographer of the Washington Opera. He’s up there looking down. Thank you Roman. Mr. Mori Shibuya, my Japanese sensei, who gave me the opportunity to have musical theater schools in Korea and Japan. Mr Jimmie Earl Perry and Professor Juan Datoy, from South Africa gave me the opportunity to help them develop their theater company to help AIDS around the world. So without their encouragement and support, I would not be standing here today.

Lydia Gaston, Virginia Wing, Baayork Lee, Steven Eng and Pan Asian Rep’s artistic director Tisa Chang at the New York Historical Society on October 15, 2014. Photo by Lia Chang
Thank you Pan Asian, Ma-Yi, 2g, East West Players and all the other Asian American companies who have helped keep the flame and passion burning. Thank you, thank you, thank you. Thank you to my Steven Eng and my Nina Zoie Lam, my co-founders of National Asian Artists Project. We come to you as a newborn who has ambition, passion and love to create a thriving community inclusive, and to forever have a platform to be more visible in this world. 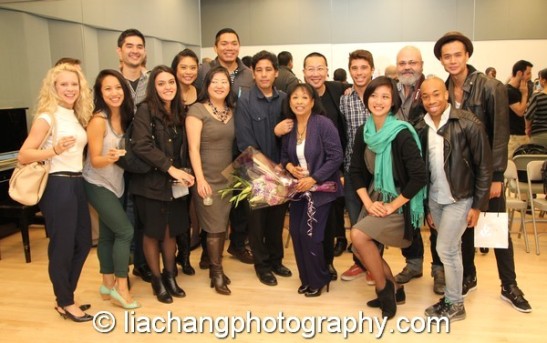 Baayork Lee is surrounded by her NAAP chorus. Photo by Lia Chang

It is a joy for me to see our afterschool kids at P.S. 124 sing and dance, and get excited to go to Atlanta to the junior theater festival, our fifth year. Thank you Principal Alice Hom for coming. Thank you ladies from our senior sing-a-long program. And thank you for NAAP Broadway Community Chorus for your support. 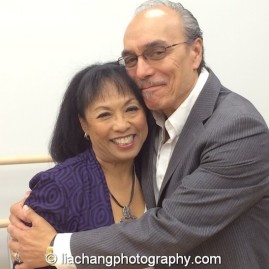 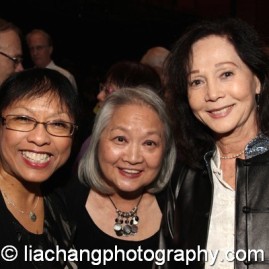 Baayork Lee, Virginia Wing and Nancy Kwan at the New York Historical Society in New York on October 15, 2014. Photo by Lia Chang
Thank you Rose Tan Kaung, past president of OCA New York, Helen Tan, OCA Westchester. Thank you Helen for coming. This award is for all the pioneers who stuck at it and said, “I am here. Hear my roar!” Virginia Wing, where are you? For all those who have touched my life, for everyone who’s life I made a difference, thank you, thank you. 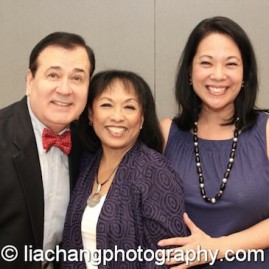 Lee Roy Reams, Baayork Lee and Christine Toy Johnson. Photo by Lia Chang
The Actors’ Equity Foundation, a philanthropic and humanitarian non-profit organization, was created in 1962 to aid and assist the members of the acting profession and to promote the theatre arts. It is separate from Actors’ Equity Association and is funded by estate bequests and individual donations. 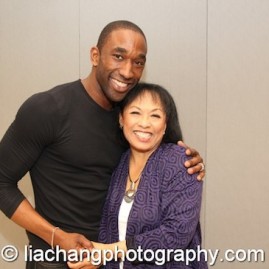