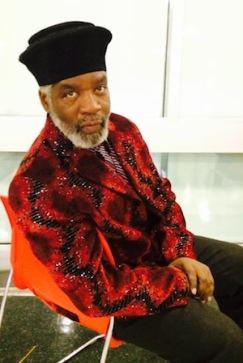 It’s time to step up for our beloved Rome Neal, an actor, director, producer and jazz vocalist, who broke his ankle and shoulder after a 30 ft. ladder fall while setting lights for a show at the Nuyorican Poets Cafe in New York on September 4, 2014.

Rome has staged and produced numerous theatrical productions and events at the Cafe, and has produced his popular music series Banana Puddin’ Jazz  there for 11 years. The Nuyorican Poets Cafe, has been around for forty years and is known as one of the premier spaces for award winning poetry and poetry slams, award winning theatre and music.

A Crowdfunding campaign on FUNDLY has been set up by Sheryl Renee, BPJ sponsor, web designer and friend. I just donated and you can too by clicking here

“Rome has personally given opportunity to thousands of creative souls who live in, and come to NYC to live out their dreams,” said Sheryl Renee.

Sheryl Renee posted this message on her Facebook page on October 8th.

“Heading into our last month of this funding campaign for brother Rome Neal. Special thanks to the 44 Rome Neal supporters who have given and helped reach a 1/4 of the goal for living expenses. Rome says the funds have made a big difference. Fundly is a safe and quick way to donate. This Sunday, Oct 12th is Eric Frazier’s “Rome Neal Tribute Concert” with a fantastic list of world class entertainers. An excellent way to help him, but treat yourself! Please share this campaign with others!”

Rome’s accident has put a crimp in his style as an artist, and as one of the hardest working producers in NYC which he has so tirelessly devoted his time and personal resources to for over 40 years. The crowd-funding campaign that Sheryl Renee has established on FUNDLY is to help Rome with his rehabilitation, and to continue his important work with Banana Puddin’ Jazz Live Shows at the Nuyorican Poets Cafe, and his weekly Banana Puddin’ Jazz Program, featuring highlights of the Live show, which airs on Brooklyn Public Network.

Alone when he fell to the floor off the ladder, Rome managed to crawl to the door and alerted people passing by of his predicament. The good Samaritans (two women from London, whom Rome would like to find and thank) assisted him and called the ambulance.

“Rome has endured his first surgery on his broken ankle and is preparing for a second, and possibly an operation on his shoulder,” writes Steve Williams on Facebook.  “Let us all remember this Theatrical and Music impresario who has done so much, to, promote the arts and talents of many including myself. Prayers go out to the family of and my friend and Brother From Another Mother, Rome Neal.”

“As an artist and/or supporter of other artists, we all know that an injury can become both artistic and financial setbacks and therefore, please be prepared to assist and attend any fundraisers being coordinated,” said David Brooks.

Rome Neal in performance at the Nuyorican Poets Cafe in March 2014. Photo by Lia Chang

Rome posted this message on his Facebook page on September 9th.

“Greetings and much love to all my family in the Arts and in Life, your prayers and healing vibrations are truly felt and some of you have tapped a tearful emotion in me which flows like a fountain, sometimes overwhelming…. Knowing I will be out of commission for quite a while, some of my people (Sheryl Renee, Eric Frazier, and Helena D. Lewis) are helping with crowd fundraising and tributes to show love and help me get through the uncertain times ahead. If you can show your love it would be appreciated…. As I go in to my second surgery I feel blessed knowing that things are going to work out wonderfully!!! THANKS AGAIN FOR THE LOVE!”

After several surgeries on his ankle at Bellevue Hospital, the 61 year old NYC native was transferred to Gouverneur Hospital, where he has been having physical therapy daily and has been well taken care of.  He has a lengthy recuperation and healing process ahead.

It’s impossible to keep a good man down, so Rome decided to show some appreciation by organizing and inviting his jazz friends to perform in an impromptu concert on  October 9th.

Rome Neal posted this message on his Facebook page on October 8th.
“While here at the Gouverneur Health Service facilities I have received so much love and care from everyone and I must say they have giving me a totally new appreciation of healthcare workers. With just about six days before my release into the real world I must say they all have helped me to adjust quite well…. I told them so and also said before I leave I wanted to do a JAZZ concert for them and invite my friends over to participate on this Thursday, Oct 9th at 4pm – 5:30pm… I would like to thank Arnold Lee, (s) Clay Clayborn Herndon (d), Alex Gressel (b), Mamiko Watanabe (p), and vocalists:, Rome Neal, (yes I can sing, maybe not be able to) walk or dance using my right foot) Steve Williams “Sonny”and Eric Frazier (singing and tapping). Need a female vocalist in this group…. It’s a great feeling to show people they are appreciated and these folks at the hospital are so looking forward to this concert.” 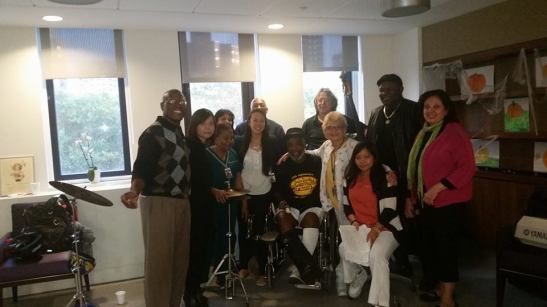 Rome Neal with family members and crew at Gouverneur Hospital after an impromptu concert that he organized in gratitude for the hospital workers taking such good care of him. Photo courtesy of Steve William’ Facebook Page.

Rome posted this message on his Facebook page on October 9th.

“Folks there was magic in the air and we all felt it… There was sick people in the house and people who help sick people to heal and get better in the house . And there was my Jazz musician friends in the house and together with the music we brought out smiles, laughter and tears of joy… No folks I’m not fully well, I’m fully blessed and thankful this event took place for a great cause…. A show of appreciation to the hard working health care workers at Gouvernuer Hospital.”

If you would like to send Rome a personal message, the address is:

Rome had just been celebrating his 40th Anniversary with his wife, Siu and their children (Rome, Smile, Lia (Olympic Bronze medalist) and Treasure, and his grandchildren and bonus daughters. Who knew that by weeks’ end, he would be facing months of critical rehabilitation and uncertainty, with no means of support. 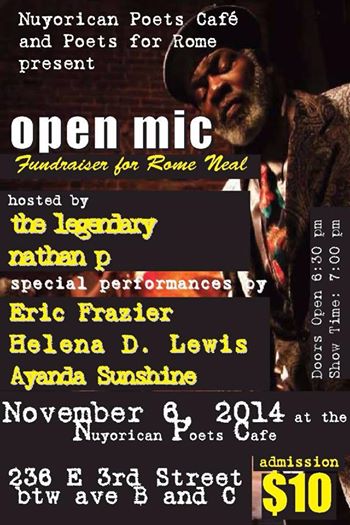 On Thursday, November 6, 2014, the Nuyorican Poets Cafe and NBTF Midnight Poetry Jam family, Poets for Rome, are presenting an open mic fundraiser to assist with medical bills for Rome, hosted by the legendary nathan p., with special performances by Eric Frazier, Helena D. Lewis and Ayanda Sunshine at the Nuyorican Poets Cafe, 236 E. 3rd St. (btwn Ave B and C) in New York. Admission is $10. Doors open at 6:30 P.M. Show time: 7:00 P.M.

ROME NEAL (Actor/Director/Producer/Jazz Vocalist) is the Artistic Theatre Director of the Nuyorican Poets Café theatre program. Rome received an Obie Grant with Café founder Miguel Algarin for excellence in theatre. He is the recipient of five Audelco Awards – two for directing – Pepe Carril’s SHANGO de IMA and Samuel Harp’s DON”T EXPLAIN; two for acting – Lead Actor in Gabrielle N. Lane’s SIGNS, and one for Solo Performance in his critically acclaimed MONK, by Laurence Holder. He also received the National Black Theatre Festival’s coveted Lloyd Richards Director’s Award. His fifth Audelco Award was a technical award for his lighting design of SHANGO de IMA. Mr. Neal received a Triumph Award for his acting in Alex Mc Donald’s PRISM and a Monarch Merit Award for his outstanding contributions in New York Theatre. His directorial credits includes his adaptation of William Shakespeare’s JULIUS CAESAR SET IN AFRICA, Sekou Sundiata’s THE CIRCLE UNBROKEN IS A HARD BOP Amiri Baraka’s MEETING LILLIE, SHANGO de IMA, PRISM, Ishmael Reed’s THE C ABOVE C ABOVE HIGH C and Amiri Baraka’s PRIMITIVE WORLD: AN ANTI- NUCLEAR JAZZ MUSICAL, all performed at the Nuyorican Poets Cafe and National Black Theatre Festival in Winston-Salem, North Carolina. Rome directed Wesley Brown’s LIFE DURING WARTIME at the Cafe and The National Black Arts Festival in Atlanta Georgia. His production of Alex McDonald’s PRISM was performed at the Ex-Ponto Festival in Slovenia, Eastern Europe. His acting credits include Dan Owen’s FOREVER MY DARLIN’, directed by Daune Jones at the Richard Allen Center, and later by John Amos, and Judi Ann Mason’s A STAR AIN’T NOTHIN BUT A HOLE IN HEAVEN directed by Mikel Pickney. Rome’s film acting credits include Michael Almereyda’s HAMLET, Spike Lee’s SUMMER OF SAM and Leon Ichaso’s PINERO. As a Jazz Vocalist, Rome has performed at Town Hall on Broadway, The Metropolitan Room, The Museum of the City of New York, Lenox Lounge, Joe’s Pub, Saint Nick’s Pub, Minton’s Playhouse, Showman’s, 966Jazz, Baker’s Keyboard Lounge in Detroit, The Nuyorican Poets Cafe, The Jazz Spot, and has performed around town as the lead vocalist for the Bill Lee Mo’ Better Quintet (Spike’s father). Mr. Neal has a CD entitled: “A Brighter Crooner”, and now his live concert “All in The Puddin'” recently released on DVD along with his “Rome Neal’s Banana Puddin’ Jazz Jam… A Night To Remember”.