Arlan Huang in his Brooklyn Studio during the Arts Gowanus Open Studio on October 18, 2014. Photo by Lia Chang

Artist Arlan Huang recently received a 2013-2014 CALL, or Creating A Living Legacy Award, from the Joan Mitchell Foundation, which provides support to visual artists in creating, through organizing and inventorying, comprehensive documentation of their artworks and careers. 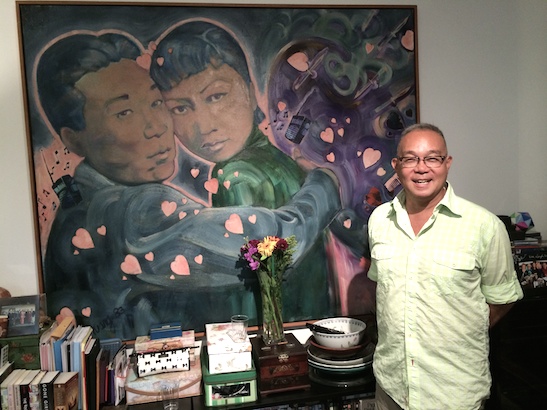 Arlan Huang poses in front of his painting, “Let’s Do It, Let’s Fall in Love”, at the home of Marilynn K. Yee and George Wong on September 13, 2014. Photo by Lia Chang

For the past eight years, Huang has balanced his business, Squid Frame, with his passion for painting in the Gowanus neighborhood of Brooklyn, after 30 years in his Manhattan space on the Bowery.
artinlimbo.com: GOS Artist Profile: Arlan Huang and Squid Frame Studios.

Born in Bangor, Maine in 1948, and raised in San Francisco since the age of 2, Huang is an avid storyteller, who talked of his colorful family history, his San Francisco childhood, his strong connection to the community and how family and being Chinese have shaped the very core of his being. He was involved with Chinatown groups and at the Chinatown YMCA, where his uncle was the resident youth director. 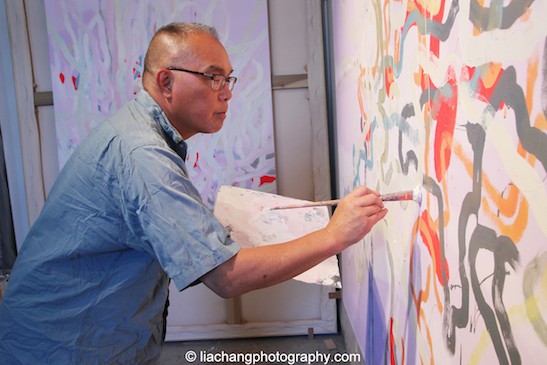 I first discovered Arlan Huang in 1994 at the Museum of the Chinese in the Americas in New York Chinatown. Entitled, “Dim Sum-Hearts Desire,” Huang’s mixed media installation was an approximation of his grandparents’ New York Chinatown tenement, with 100 numbered glass stones among the glass inventions representing a family history passed down from generation to generation.

“100 stones for Grandfather,” shared Huang, “tells how my grandfather immigrated from Seattle to Vancouver to Alaska to Bangor and how he went back to China to get his wife and bring her back to Bangor. It is also the story of how migration happens and how they ended up on Mulberry St. There’s sort of a microcosm in Asian American history because of the immigration laws passed in the 1950’s where more immigrants could come to the U.S. My grandmother’s relatives immigrated to New York in the 1950’s and my grandparents came to help them get settled.”

In 1996, Huang created a glass wall installation entitled, “American Origins” at P.S. 152 in Brooklyn for the New York City Board of Education, in the hope of contributing to the ideas of American public education. The focal point for this installation is the immigrant experience and the collective hope of coming to America to educate children in the best education system possible.

Fabricated of glass stones encased in glass blocks, there are 247 transparent, translucent and opaque colored stones numbered from 152-399. The block between 282 and 283 in the red wall is the only block not numbered. It contains the shards of a word sculpture by the artist John Brekke.

“My mother’s parents were pioneers in San Francisco, steeped in Chinatown lore since they came to the States.”

Huang’s West Coast grandparents were very civil minded; his grandfather was the president of the Chinese Consolidated Benevolent Association. The Chinese Historical Society of America building, designed by renowned architect Julia Morgan, was originally the Chinatown branch of the YWCA. There is a room dedicated to Huang’s grandmother, a founding member.

Huang credits his mother’s side of the family with nurturing his artistic spirit. His mother played piano and the church organ. One uncle introduced him to model making. Another planted the seeds for his love of the Sierra Nevada, and the idea of being one with nature. His mother’s childhood friend, an art teacher, instilled in him the love for art. She offered him a perspective into seeing, making and critiquing art.

From age 7 to 11 Huang was obsessed with winning the San Francisco Chronicle’s weekly art contest. The budding artist was confident that he would win, but his highest ranking was second. Unperturbed, his mother would give him more stamps for the next contest, and by age 11, he had a stack of honorable mention certificates. He decided that Jr High School was more exciting, and the contest faded from his interest.

“One year later, before heading off to class I casually flipped the newspaper to the art page. This time the winning painting looked familiar. There it was, my painting, my name. I had won. My family was ecstatic. Who submitted my art? Alas, my mother was faithfully submitting my art for a year.”

“The heart and soul of my art belongs to my mom. Quite perseverance comes from my father.”

“My father’s side gave me the humorous, raucous and most joyous aspect of family living. My father quietly gave me his shoulders to stand on. And most of all, grandma made lobster Cantonese.”

Huang began his formal art studies at the San Francisco Art Institute, the City College of San Francisco and chose Pratt Institute in New York which gave him the opportunity to spend time with his paternal grandparents.

“Throughout my life, there was always something special for me with my relationship with my grandparents. I came to New York to get to know them better,” he said.

Paintings by artist Arlan Huang in his Brooklyn Studio. Photo by Lia Chang
During the week he would be at the dorms immersed in a diverse curriculum of art, sculpture, painting and architectural engineering classes. On the weekends he made his way to Mulberry St. for dinner with his grandparents. He received his B.F.A. in 1972 from Pratt but not before making a slight detour. 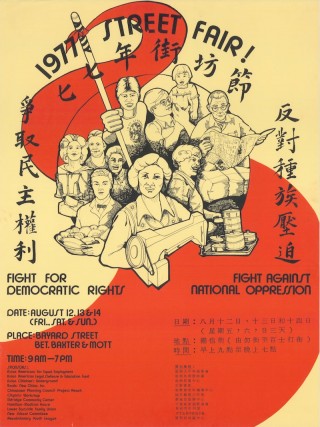 culturestrike.net: Taking Back Chinatown
“A strange thing happened on the way to graduation. The anti-war movement, ’69. ’70, ’71. That took up more time than school.”

During Huang’s last year of college, he participated along with other Asian American students, artists, and community activists in the publication of Yellow Pearl, a compilation of Asian American poetry and songs by Chris Ijima, Nobuko Myamoto, and “Charlie” Chin. The group met at Basement Workshop on Elizabeth St., an Asian American community arts center in New York’s Chinatown.

“The publication of Yellow Pearl took a year. We had meetings, once, twice, three times a week. That time was a magical time. It was a romantic period. Because you were audacious, you thought things could really change. The time was revolution. Those were times when things were being defined. Even the term Asian American wasn’t made up yet,” he said.

Huang has designed public works of art for the National Endowment for the Arts and has created permanent glass sculptures for the New York City Percent for the Arts Program and the New York Dormitory Authority. For Urban Glass, he created “Aquellos Ojos Verdes for Olga,” a steel and wood framed blown glass in glass block partition. For Baron Capital, a New York brokerage firm, he worked with Genseler and Associates on an undulating glass block wall.

Arlan Huang created a series of glass panels, approximately 4’ x 5’, on which he mounted his signature hand-blown glass “stones” inserted into glass blocks. The stones, which glow like jewels, were created in New York and assembled in the glass blocks at Dorothy Lenehan Studios in Oakland. Photo by: Bruce Damonte‬
Location: Connector Building between the Pavilion and North Residence of Laguna Honda Hospital

His commissions include a glass and steel commission for Laguna Honda Hospital for the San Francisco Arts Commission; an installation for the Borough of Manhattan Community College; and the river stone shaped glass pieces for his sculptural installation for the lobby of the new $173 million, 400,000 square foot Jacobi Medical Center in the Bronx, commissioned by the Percentage for Art in NYC Program. The design is Huang’s homage to a Zen rock garden and reflecting pool which hangs 20 feet above the main staircase and escalators of the building, residing within the interior skylight space. The 50 blown glass pieces seem connected by umbilical cords of fiber optic cable.

Huang has returned to his first love painting and has been enjoying the luxury of moving oil paint and being “in” the painting in solitude. He considers this medium to be a counter point to his glass blowing activities which are a social, team-oriented process. 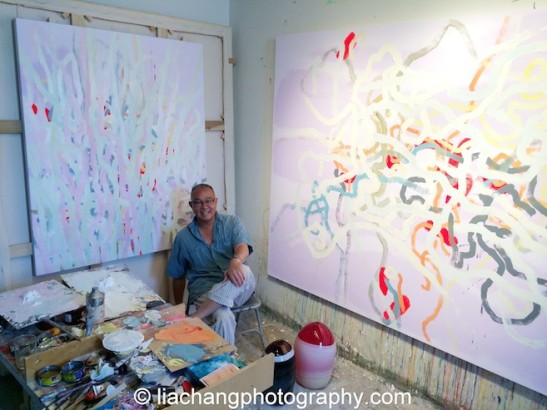 To contact Arlan regarding his glass vessels and paintings, you can email him at blueforyellow@gmail.com.

Other articles about Arlan:
medium.com: Arlan Huang: Art and Artists
Arlan Huang Celebrates Most Violet
MOST VIOLET:PAINTINGS 2003- 2008 by Arlan Huang
Inside the fiery furnace of glass sculptor and painter Arlan Huang

Lia Chang is an actor, a performance and fine art botanical photographer, and an award-winning multi-platform journalist. Lia recently starred as Carole Barbara in Lorey Hayes’ Power Play at the 2013 National Black Theatre Festival in Winston-Salem, N.C., with Pauletta Pearson Washington, Roscoe Orman, Lorey Hayes, Marcus Naylor and Phynjuar, and made her jazz vocalist debut in Rome Neal’s Banana Puddin’ Jazz “LADY” at the Nuyorican Poets Cafe in New York. She is profiled in Jade Magazine.