Jaygee Macapugay poses with a poster of Here Lies Love in front of The Public Theater in New York, where she will assume the leading role of Imelda Marcos beginning October 20, 2014. Photo by Lia Chang

Macapugay has been with the show’s company as a swing and understudy to the role of Imelda. Her other stage credits include Hello Dolly!, Imelda: A New Musical, Miss Saigon, The King & I and Smokey Joe’s Café.

Jose Llana, Maria-Christina Oliveras, Jaygee Macapugay, Melody Butiu and Conrad Ricamora after a performance of Here Lies Love at The Public in New York on August 22, 2014. Photo by Lia Chang

Here Lies Love was conceived by David Byrne, and features lyrics by Byrne, music by Byrne and Fatboy Slim, additional music by Tom Gandey and J Pardo, and choreography by Annie-B Parson.

Within a pulsating dance club atmosphere, David Byrne and Fatboy Slim deconstruct the astonishing journey of Filipina First Lady Imelda Marcos retracing her meteoric rise to power and subsequent descent into infamy and disgrace at the end of the People Power Revolution. Here Lies Love is neither a period piece nor a biography, neither a play nor a traditional musical but an immersive theatrical event combining songs influenced by four decades of dance music, adrenaline-fueled choreography, and a remarkable 360-degree scenic and video environment to go beyond Imelda’s near-mythic obsession with shoes and explore the tragic consequences of the abuse of power. Here Lies Love is a 90-minute theatrical experience. Set within a dance club atmosphere, audiences will stand and move with the actors. Comfortable shoes and clothing are recommended. Dancing is encouraged.

Tickets for Here Lies Love range from $99-$139. A limited number of $40 day-of-performance rush tickets will be available at The Public’s Taub Box Office (425 Lafayette Street, NYC) one hour before the start of each performance. The Fall performance schedule is as follows: Mondays and Tuesdays at 7 pm, Wednesdays and Thursdays at 8 pm, Fridays at 7 pm and 10:30 (the Late Night Disco!) and Saturdays at 5 pm and 9:30 pm. Tickets subject to availability, and the offer is good for two tickets per person, cash or credit cards. For more info and tickets to Here Lies Love, please visit http://www.herelieslove.com/.

The New York production will close on January 4, 2015. The show is also currently running at London’s National Theatre through January 8, 2015. A production will open in Sydney in May 2015 as the theatrical center piece of the Vivid Festival.

Jaygee is no stranger to the role of Imeda, having played the title role of the Off-Broadway production of Imelda, A New Musical (collaboration with East West Players & Pan Asian Repertory).

Jaygee has a passion for collaborating on new musicals and plays, including Tears from Heaven by Frank Wildhorn, Internal Bleeding by Christine Toy Johnson, and Honor by Pete Mills. In 2014, she performed in the 54 Below concert of Tiananmen, with music & lyrics by Drew Fornarola and directed by Stafford Arima; readings of Ms. Oriental by Marisa Marquez, and as a singer with the Asian American Librettists, Composers and Lyricists Project. Jaygee’s upcoming projects include selections from Timothy Huang’s musical Costs of Living for the 2014 NAMT Songwriter Showcase. 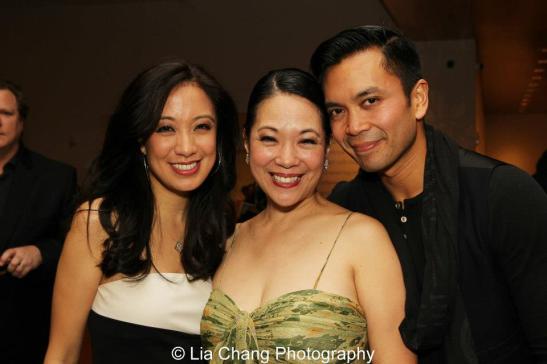 Jaygee has worked in numerous musicals Off-Broadway and regionally, including Miss Saigon at The MUNY, 5th Avenue, Casa Manana, North Carolina Theatre; Aida; Smokey Joe’s Café at the Maltz Jupiter Theatre, Riverside Theatre; and has performed with Lou Diamond Phillips in KC Starlight’s production of The King & I.

Jaygee Macapugay as Amneris in Aida

Jaygee Macapugay with her sister Liberty Belles and John Voight, performing for the USO. Photo by Rob Rich

Jaygee proudly performed for our troops as a member of the Andrews sisters inspired trio, “The Liberty Belles.” As a Liberty Belle, she performed for deployment and homecoming ceremonies for U.S. troops, and also performed for President Bush Senior and former first lady Barbara Bush, NYC Mayor Bloomberg, and live on national television for “New Year’s Eve with Carson Daly”.

As a soloist, she has performed in concert at Lincoln Center’s Alice Tully Hall (Phil Dev’s benefit concert: Suites By Sondheim starring Lea Salonga), Symphony Space, and the Hammerstein Ballroom. 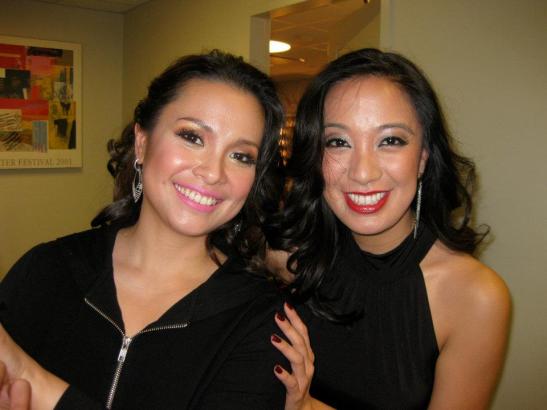 Jaygee started her career as a singer in Disney World in Orlando, FL, playing Pocahontas in Pocahontas & Her Forest Friends and in Tarzan Rocks.

Jaygee is an active member of the Asian American theatre community. She is a proud member of Broadway Barkada, a collective of Filipino theater artists using their talents to affect change in the lives of those in need. She is also a member of the National Asian Artists Project and last season, she played Irene Molloy in NAAP’s all Asian production of Hello, Dolly!, directed by Lee Roy Reams, in the Irene Diamond Theatre at the Pershing Square Signature Theatre Center. She is a graduate of University of Illinois at Urbana-Champaign/The Neighborhood Playhouse. 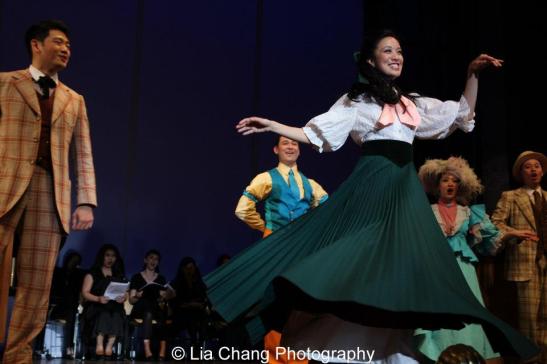 Jaygee Macapugay as Irene Molloy at the curtain call of NAAP’s production of Hello Dolly!, directed by Lee Roy Reams, at the Irene Diamond Theatre at The Pershing Square Signature Center in New York on April 30, 2013. Photo by Lia Chang