In conjunction with the exhibition Chinese American: Exclusion/Inclusion, the New-York Historical Society presents the American premiere of the Discovery Channel Asia’s groundbreaking series Chineseness  on Thursday, October 2, 2014, with a conversation between featured artist Yang Chihung and host of the series Dr. Agnes Hsu-Tang. The original documentary series examines the idea of a renaissance in Chinese identity through the lives and work of four contemporary Chinese artists and illustrates the different perspectives on the contemporary Chinese consciousness.

Yang Chihung is an abstract painter who immigrated to New York City in 1979 and is the first artist of Chinese descent to be awarded The Clocktower residency. Dr. Agnes Hsu-Tang is an archaeologist and an adviser to UNESCO and publishes on Chinese art and archaeology. She is also the host of History Channel Asia’s Mysteries of China series.

The Robert H. Smith Auditorium at the New-York Historical Society, 170 Central Park West, New York, NY 10024. This program is currently filled to capacity. To be put on a wait list, RSVP to koconnor@nyhistory.org.

Make it an extra-special evening. See the exhibition Chinese American: Exclusion/Inclusion on view through April 19, 2015, and enjoy a special Chinese-inspired menu designed by chefs from Stephen STARR from 5–6:45 pm. Tickets are $35 and must be ordered in advance by calling (212) 485-9268 or clicking here.

The New-York Historical Society recognizes the leadership support of Oscar Tang and Agnes Hsu-Tang – Tang Family Foundation for Chinese American: Exclusion/Inclusion. Generous funding has also been provided by the National Endowment for the Humanities, the Institute of Museum and Library Services, the Achelis and Bodman Foundations, and Harold J. and Ruth Newman. Additional support provided, in part, by Lulu C. Wang.

Chinese American: Exclusion/Inclusion, an exhibition that interprets the legacy of Chinese in the United States as a key element of American history, spanning the late-18th century to the present and all regions of the country is currently on view at The New-York Historical Society through April 19, 2015. The exhibition  addresses the challenges of immigration, citizenship and belonging that shaped not only the Chinese American experience, but also the development of the United States from the formation of its policies to its national character. 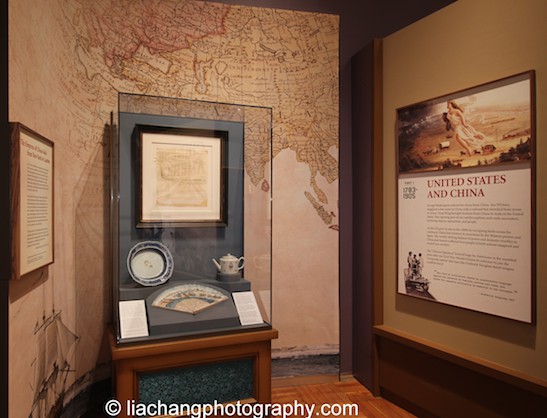 “Chinese American tells the fascinating but complex story of relations between the United States and China, from the Chinese tea thrown overboard in Boston Harbor, to one of our earliest models of international educational exchange, to the nation’s first-ever exclusionary immigration policy, based solely on Chinese origin’” said Dr. Louise Mirrer, President and CEO of the New-York Historical Society. “The impact of the Chinese in America over more than two hundred years of history has been extraordinary, and yet its story is little or entirely unknown. This exhibition will provoke a new understanding of what it means to be an American. 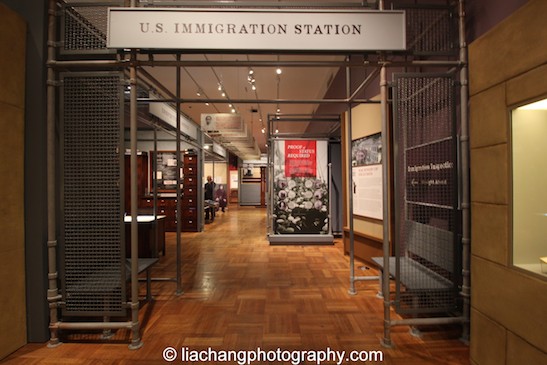 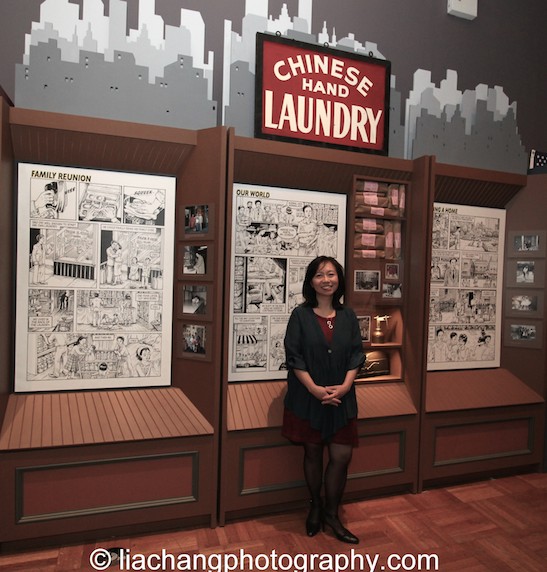 A 12 chapter graphic novel-style pictorial display illustrates the story of the Chins of New York, as told by Bronx-born Amy Chin. She starts in 1913, with the arrival of her grandfather Bok Ying, and ends nearly a century later with the family’s expedition to their ancestral village in China. Photo by Lia Chang

Programs and Special Initiatives
Two interchanging multimedia pieces greet visitors to the New-York Historical Society. The Chinese in America: We Are Family is a rotating array of Chinese characters for family names and thousands of individual portrait photographs, including distinguished individuals like architect I.M. Pei or champion figure skater Michelle Kwan. The piece was developed by the Committee of 100 for the USA Pavilion at the 2010 Shanghai World Expo. Another large rotating collage of portraits will feature profiles of historical and contemporary individuals, and the public can submit personal images through New-York Historical’s website to be incorporated into the display. To learn more, click here. 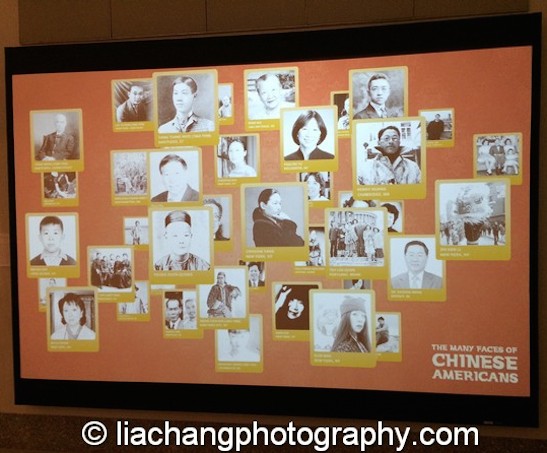 The Many Faces of Chinese Americans greets visitors to the New -York Historical Society at the entrance. Photo by Lia Chang

A related publication, Chinese American: Exclusion/Inclusion (Scala 2014), features 65 artifacts from the exhibition, serving as a companion guide to the show and a stand-alone chronological overview of the critically important history of the Chinese in America.

Wednesday, October 15, 6:30 pm-Nancy Kwan, one of the first actresses of Chinese descent to achieve fame in Western cinema, will speak with producer Susan Lacy about the defining moments of her career, sharing stories of friendships with icons such as Bruce Lee and Dean Martin, as part of the Bernard and Irene Schwartz Distinguished Speakers Series

Saturday, January 10, 7 pm-Award-winning composer/conductor Tan Dun will be joined by special guest Chinese American composers for a lecture and performance program that will trace their musical journey from China to America. Co-Presented by U.S. China Cultural Institute, Cultural Associate of the Committee of 100