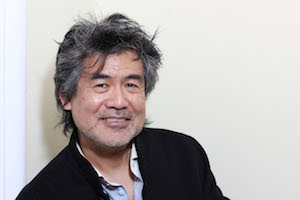 On Sunday, August 17, 2014, Tony Award winning playwright David Henry Hwang, who was recently appointed to the playwriting faculty of Columbia University School of the Arts Theatre program as the new director of the Playwrighting Concentration and as an associate professor of Theatre in Playwriting, will be sleeping on the streets with “other crazy folks” from the Broadway community to support Covenant House, to which over 7,000 homeless kids will turn for shelter this year.

Below is a message from Hwang’s Facebook page. “We’ll spend an evening with these kids, hear their stories, and learn how they’re making new lives for themselves. Then, in solidarity, we’ll be given sleeping bags and head outside to find a place for the night (in a safe, enclosed area). So please visit my personal fundraising page and make a tax-deductible donation. No amount is too small, or too large. Many of us came to New York with a dream, but we needed others to help make it come true. Please help these kids. Thanks for your generous consideration.” I donated in his name. Click here so you can make a donation too.

The Executive Committee Members of Covenant House’s Sleep Out: Broadway Edition is made up of Stephanie J. Block, Jeff Calhoun, Capathia Jenkins, Denis O’Hare, Tom Schumacher and Keala Settle. “These are stars who have selflessly decided they want to walk in our kids’ shoes, and experience, if only for one night, some of what our kids go through,” said Covenant House President Kevin Ryan. “Their actions are an incredible show of support for the thousands of young people struggling to survive every night on our streets.”

Covenant House’s Sleep Out: Broadway Edition is open to any member of the theatrical community who has worked on Broadway, Off-Broadway or a National Tour, in any capacity. To reserve your sleeping bag, contact Colgan McNeil at colgan@polkandco.com or 917.261.3988.

More about Covenant House:
Founded in 1972, Covenant House is the largest privately funded agency in the Americas helping homeless kids, providing 24/7 crisis care and ongoing support at 21 facilities. For more information, visit www.covenanthouse.org. 6,900 homeless kids will step toward a new life with Covenant House New York this year. Some were born here. Some were brought to the city against their will. Some came seeking the bright lights and brilliant sounds of the Great White Way. All of them need love, care, and another chance at life. Covenant House provides food, shelter, immediate crisis care, and essential services to homeless, throwaway, and runaway kids in 21 cities throughout the United States, Canada and Latin America. We strive to move each young person forward to an independent adulthood, free from the risk of future homelessness.

David Henry Hwang’s work includes the plays M. Butterfly, Chinglish, Yellow Face, Golden Child, The Dance and the Railroad, and FOB, as well as the Broadway musicals Aida (co-author), Flower Drum Song (2002 revival), and Tarzan. Upcoming productions include two new musicals: The Forgotten Arm, with music and lyrics by Aimee Mann and Paul Bryan, for the Public Theater; and Pretty Dead Girl, with music and lyrics by Anne-Marie Milazzo. As America’s most-produced living opera librettist, he has written four pieces with composer Philip Glass, including The Voyage (Metropolitan Opera, 1992), as well as Osvaldo Golijov’s Ainadamar (two 2007 Grammy Awards), Bright Sheng’s The Silver River (1997), Unsuk Chin’s Alice in Wonderland (2007 “World Premiere of the Year” by Opernwelt magazine), Howard Shore’s The Fly (2008) and Huang Ruo’s An American Soldier (2014). Upcoming operas include Through the Looking Glass with Unsuk Chin for the Royal Opera House Covent Garden and Dream of the Red Chamber with Bright Sheng for the San Francisco Opera. Mr. Hwang penned the screenplays for M. Butterfly (1993), starring Jeremy Irons and John Lone; Golden Gate (1994), starring Matt Dillon and Joan Chen; and Possession (co-writer, 2002), starring Gwyneth Paltrow and Aaron Eckhart. With the pop star Prince, he co-wrote the song “Solo,” released on Prince’s 1994 gold album Come. He is currently writing a feature film for Dreamworks Animation and the film adaptation of Chinglish, to be directed by Justin Lin (Better Luck Tomorrow, the Fast & Furious franchise), as well as creating an original television series, “Shanghai,” for Lions Gate and Bravo. Hwang is a Tony Award® winner and three-time nominee, a three-time Obie Award winner, and a two-time Finalist for the Pulitzer Prize. He received the 2011 PEN/Laura Pels Award, the 2012 William Inge Award, the 2012 Steinberg “Mimi” Award, and the 2014 Doris Duke Artist Award, and recently completed his the Residency One Playwright term at NYC’s Signature Theatre, which produced a season of his plays, including the world premiere of his newest work Kung Fu in February 2014. He serves as President of Young Playwrights Inc, and sits on the boards of the Lark Play Development Center, The American Theatre Wing, and The Actors Fund.