Melissa Canaday is “Takin’ It On The Chin”, A Benefit for the Avon Walk for Breast Cancer

Melissa Canaday and her husband actor Edward James Hyland after a performance of Under My Skin (in which Hyland is appearing) at The Little Shubert Theater in New York on May 10, 2014. Photo by Lia Chang

Melissa Canaday, an actress turned activist, is a Five Year Breast Cancer Survivor who will be walking her Fifth Avon Walk for Breast Cancer with her Team Tango For TaTa’s teammates Cathy Armone Barna and Joaquin Canay in New York, Oct. 18-19, 2014.

On Monday, June 9, the trio is co-hosting a fundraiser, “Takin’ It On The Chin” for Breast Cancer, at the Ukrainian American Youth Association, 136 Second Ave in New York, 6:30pm – 10:00pm. Space is limited, please RSVP to Melissa Canaday – sjsmom@msn.com or Cathy Barna – catjonb@aol.com.

$25 gets you in the door to a room full of food, drink, entertainment, raffles and a live auctions. The bidding for the “Takin’ It On The Chin” EBay Auction begins on June 4nd and will end on June 13th at 7:50 p.m. Click here to bid on The Ebay site.

Glove signed by the cast of All The Way.

Bryan Cranston taking it on the chin for breast cancer.

Melissa’s personal support team includes her family – her husband, actor Edward James Hyland, and their children, Sarah and Ian Hyland. Over the past 4 years Melissa has raised around $35,000.00 and is hoping to raise another $15,000.00 this year to bring her total raised over five years to an even $50,000.00!!! Melissa has walked 157.2 miles over the past 4 walks, but that doesn’t include her training miles that total over 11,000 miles over 4 years. That’s like walking back and forth from New York to Los Angeles 2 times! Melissa does the Walk to not only raise money for research seeking to end breast cancer, she raises awareness, funds to help women less fortunate, the under insured or uninsured woman. The monies raised help to fund free mammograms, pay for transportation to get to and from chemo or radiation treatments, cover the cost of further diagnostic testing, and works with God’s Love We Deliver to bring healthy meals to those who are too weak to prepare meals for themselves. With all the good that The Avon Foundation does, Melissa is committed to do whatever it takes to end Breast Cancer as we know it. To support her please donate by going to www.avonwalk.org/goto/MelissaCanadayYear5 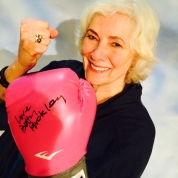 Betty Buckley ready to give one on the chin for breast cancer. 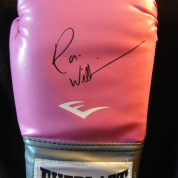 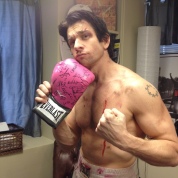 Andy Karl aka Rocky taking it on the chin for breast cancer.

Glove signed by the cast of Rocky. 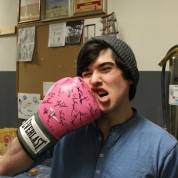 Andy Richardson aka Crutchie from Newsies.

Glove signed by the cast of Waiting for Godot and No Man’s Land. 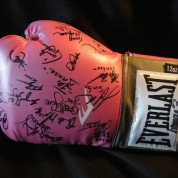 Glove signed by the cast of The Lion King.

Glove signed by the original cast of Mary Poppins.

Glove signed by the cast of Pippin. 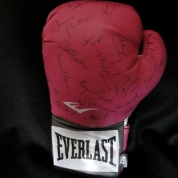 Glove signed by the cast of Machinal.

Glove signed by the cast of Under My Skin.
For more information on the Avon Walk for Breast Cancer, visit www.avonwalk.org or call 888-541-WALK. To learn more about the Avon Foundation for Women visit www.avonfoundation.org.

Lia Chang is an actor, a performance and fine art botanical photographer, and an award-winning multi-platform journalist. Lia recently starred as Carole Barbara in Lorey Hayes’ Power Play at the 2013 National Black Theatre Festival in Winston-Salem, N.C., with Pauletta Pearson Washington, Roscoe Orman, Lorey Hayes, Marcus Naylor and Phynjuar, and made her jazz vocalist debut in Rome Neal’s Banana Puddin’ Jazz “LADY” at the Nuyorican Poets Cafe in New York.  She is profiled in Jade Magazine. All text, graphics, articles & photographs: © 2000-2014 Lia Chang Multimedia. All rights reserved. All materials contained on this site are protected by United States copyright law and may not be reproduced, distributed, transmitted, displayed, published or broadcast without the prior written permission of Lia Chang. You may not alter or remove any trademark, copyright or other notice from copies of the content. For permission, please contact Lia at liachangpr@gmail.com