American Conservatory Theater (A.C.T.) culminates its 2013–14 season with the U.S. premiere of James Fenton’s acclaimed adaptation of The Orphan of Zhao, a classic Chinese legend that has its roots in the fourth century BCE. Directed by Carey Perloff and starring Tony Award–winner and San Francisco’s own BD Wong (making his A.C.T. debut), The Orphan of Zhao is an epic story of self-sacrifice and revenge. In the aftermath of a political coup, a country doctor is forced to sacrifice his own son in order to save the last heir of a noble and massacred clan. Often described as the Chinese Hamlet, this enduring tale was the first Chinese play to be translated in the West nearly 300 years ago and has inspired countless operas, plays, and movies. The Guardian praised Fenton’s adaptation as “haunting . . . [a] drama hewn out of a myth that speaks across the centuries,” and The Times of London called it “an emotionally piercing marvel.” The Orphan of Zhao will perform at A.C.T.’s Geary Theater (415 Geary Street, San Francisco) June 4–29, 2014. Press night is Wednesday, June 11, 2014. Tickets ($20–$120) are on sale now and may be purchased online at act-sf.org or by calling 415.749.2228.

Says Perloff: “Discovering The Orphan of Zhao was incredibly eye-opening for me, an insight into a vivid moment in Chinese culture and an introduction to a major classic of suspense and sacrifice rarely seen in the Western theater. The Zhao story has been told in China for a millennium, most recently in a vivid Chinese film called Sacrifice. Its arrival on the Geary stage, starring BD Wong, continues our exploration of Chinese culture with a remarkable company of Asian American actors and theater artists, including Stuck Elevator composer Byron Au Yong who is composing the many songs and live musical interludes in the production. We hope our audiences will be as transported and surprised by this stunning piece of world theater as we were when we first encountered it.” 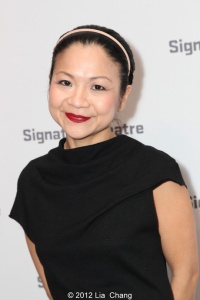 A.C.T. will offer numerous InterACT events—many of which are presented free of charge—in association with The Suit that will give patrons opportunities to get closer to the action while making a whole night out of their evening at the theater. Visit act-sf.org/interact to learn more about subscribing to these events throughout the season:

The Orphan of Zhao is a co-production with La Jolla Playhouse in La Jolla, CA, with performances, July 8-August 3, 2014.

A.C.T. subscribers enjoy incredible savings, unparalleled access, exclusive benefits, and personalized customer service. Subscribers save as much as 33 percent off single-ticket prices. Full-time students, educators, and administrators with valid ID save up to 50 percent off select packages. Senior discounts are available for certain series. A.C.T.’s competitive subscriber benefits include free ticket exchanges up to the day of scheduled tickets, priority seating, ticket insurance, access to convenient prepaid parking one block away from the theater, and discounts for neighborhood restaurants. http://www.act-sf.org/subscribe 415.749.2250.