Brooklyn, NY–Brooklyn Botanic Garden’s (BBG) cherry blossom festival, Sakura Matsuri— returns for its 33rd year on April 26 and 27, 2014. Taking place during Hanami, the Japanese tradition of enjoying each moment of cherry blossom season, Sakura Matsuri festivities extend beyond BBG’s spring blooms with over 60 energetic and dynamic performances, demonstrations, and exhibits, many of which have been commissioned to showcase the best of traditional and contemporary Japanese culture. The festival’s distinctive entertainment and community spirit attracts one of the largest, most colorful audiences for a cultural event in the city. 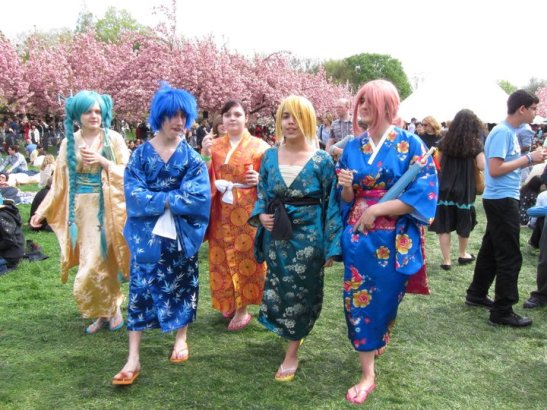 Sakura Matsuri favorites returning in 2014 include the following:

BBG’s Osborne Garden will feature manga and other contemporary Japanese culture, including the following:

Kids’ activities include the following:

The full event schedule is available at bbg.org/visit/event/sakura_matsuri_2014. The cherry display is tracked on BBG’s web-based CherryWatch feature, which maps the main part of the collection and provides a daily blooming status for each tree, as well as detailed information about each cultivar. This year, the Garden encourages visitors to share their own cherry blossom images—amateur or professional—on social media, including Twitter, Instagram, and Facebook, using the hashtag #bbgcherries. Photographers can also post images in BBG’s visitor photo pool on Flickr.
Admission to Sakura Matsuri is $25 for adults and $20 for students (12 to 17) and seniors (65 and over). BBG members and children under 12 years of age enter for free. Admission fees will be charged all weekend during Sakura Matsuri. Events are free with Garden admission and will be held rain or shine. Advance tickets can be purchased online. Brooklyn Botanic Garden members and ticket holders skip the lines. Visit bbg.org/support/join to become a BBG member. Lead sponsorship for Sakura Matsuri 2014 is provided by National Grid.

Lia Chang is an actor, a performance and fine art botanical photographer, and an award-winning multi-platform journalist. Lia recently made her jazz vocalist debut in Rome Neal’s Banana Puddin’ Jazz “LADY” at the Nuyorican Poets Cafe in New York.