Congratulations to Tony award-winning playwright David Henry Hwang who will receive the Steinberg Distinguished Playwright Award at the 5th Annual Steinberg Playwright “Mimi” Awards, on Monday, October 29th, at the Lincoln Center Theater in New York City. Mr. Hwang will be presented with a cash award of $200,000 along with “The Mimi,” a statuette designed by Tony Award-nominated scenic designer and architect David Rockwell.

Chinglish, Mr. Hwang’s most recent comedy about an American businessman in China, is currently having its West Coast premiere at Berkeley Rep with a cast lead by Michelle Krusiec and Alex Moggridge, and featuring Vivian Chiu, Celeste Den, Austin Ku, Brian Nishii and Larry Lei Zhang. Mr. Hwang is also penning the screenplay, which will be directed by Fast & Furious helmer Justin Lin in 2013. Chinglish, had a well-received premiere at Chicago’s Goodman Theatre, and won a Jeff Award for Best New Work in 2011. It moved to Broadway, where it received a Drama Desk Nomination for Outstanding New Play, was named Best New American Play of 2011 by TIME Magazine, and as one of the Top 10 Broadway shows of the year by Bloomberg Radio, NY1 and WNYC. Click here for more information on the production at Berkeley Rep, which has performances from August 24 – October 21, 2012. 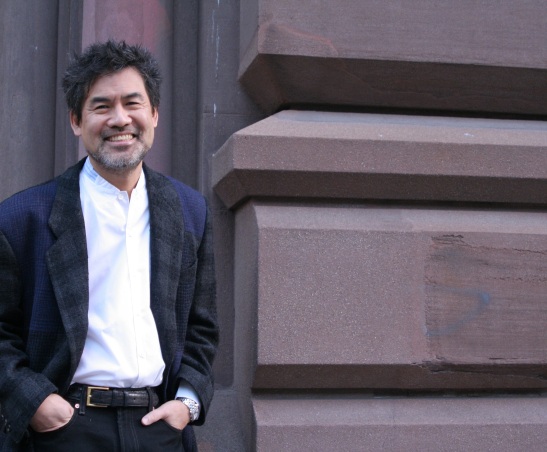 “I’ve been very fortunate to have found something I wanted to do with my life, and a place in the American Theater. Receiving the Mimi Award is an extravagant blessing, which overwhelms me with gratitude,” said David Henry Hwang. “Since learning the news, I’ve been able to turn down some commercial media work to focus on my theater projects. My deep thanks to the Steinberg Trust and Board for its visionary support of American playwrights, and to the Advisory Committee, who saw fit to include me among the extraordinary dramatists who have received this life-changing gift.”

The Mimi Awards promote theater as a vital part of our culture by nurturing American playwrights and encouraging the development and production of new American plays. The Steinberg Distinguished Playwright Awards take place biennially, to honor and encourage the artistic excellence and achievement of an American playwright whose body of work has made significant contributions to the American theater.

“The Harold and Mimi Steinberg Charitable Trust is extremely proud of the selection of David Henry Hwang as the recipient of this year’s Distinguished Playwright Award,” said Jim Steinberg, a member of the Board of Directors of The Harold and Mimi Steinberg Charitable Trust. “For 32 years Mr. Hwang has written thoughtful, provocative plays that have engaged and challenged audiences throughout the world. The breadth of his canon encompassing not only dramatic works, but also musical theatre, children’s theatre and opera have placed him at the apogee of a career in the theatre. We look forward to seeing many new works by Mr. Hwang in the years to come.”

The members of the Board of Directors of The Harold and Mimi Steinberg Charitable Trustare Carole A. Krumland, James D. Steinberg, Michael A. Steinberg, Seth M. Weingarten and William D. Zabel.

“I have been dazzled by David Henry Hwang’s work ever since I saw M. BUTTERFLY in 1988. Mr. Hwang’s work has chronicled the Asian American experience with depth and insight and humor in a body of work that finds a common humanity in the status of all of us,” said Advisory Committee member, Lynne Meadow. “As he has wrestled with questions of identity – cultural, sexual and racial – he has given us memorable and thrilling and challenging evenings in the theatre. I am thrilled that the Steinberg Playwright Award has been awarded to him in recognition of his past accomplishments and in anticipation of more major works to come.”

“David Henry Hwang’s extraordinary body of work and his unrelentingly honest voice as a playwright make us particularly proud to honor him with this year’s Steinberg Distinguished Playwriting Award,” said Advisory Committee member, Neil Pepe. “He is an artist who enriches and challenges the American theatrical landscape in ways that are both innovative and revelatory. Finally, he has shown himself to be a generous and forward-thinking person who continues to have a major impact on the field. We are thrilled to bestow this major award to such an outstanding artist.”

About The Harold and Mimi Steinberg Charitable Trust:
The Harold and Mimi Steinberg Charitable Trust was created by Harold Steinberg in 1986 in the names of himself and his late wife Miriam. The Trust’s primary mission is to support and promote the American theater as a vital part of our culture by nurturing American playwrights, encouraging the development and production of new American plays, and by providing significant support to theater companies across the country.

Since its inception, the Trust has given in excess of $65 million to more than one hundred not-for-profit theater organizations. These gifts have funded countless productions, as well as the commissioning of playwrights, playwriting programs and arts-in-education outreach programs for thousands of children in an effort to create and educated new generations of theatergoers.

The Trust also collaborated with the American Theater Critics Association to create and fund the Steinberg/ATCA New Play Award. The award is presented annually during the Humana Festival of New American Plays at Actors Theater of Louisville. Recent winners of this award include Craig Lucas, Lynn Nottage, Lee Blessing and Nilo Cruz.