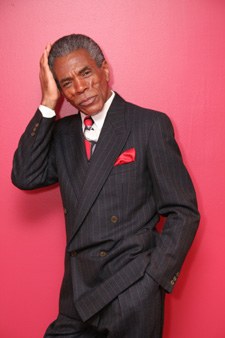 Two-Time Tony Award nominated and Emmy Award winning performer André De Shields brings his acclaimed theatrical concert BLACK BY POPULAR DEMAND back to the New York stage for three shows only, Friday evenings May 4, 11 and 18 at The Laurie Beechman Theatre Downstairs at The West Bank Café (407 West 42 Street). Showtime is 11:00 PM. General admission tickets booked in advance are $25 plus $15 food/beverage minimum; $35 at the door (based on availability) plus $15 food/beverage minimum. Tickets are available at www.smarttix.com or by calling 212-868-4444.

BLACK BY POPULAR DEMAND will feature De Shields along with his longtime partners in crime, vocalists Freida Williams and Marléne Danielle, with accompaniment by pianist Larry Spivack.

In a career spanning more than forty years, André De Shields has distinguished himself as an unparalleled actor, director, choreographer and educator. He is the recipient of the 2009 National Black Theatre Festival Living Legend Award, the 2009 AUDELCO Award for Outstanding Performance by a Lead Actor in a Musical/Male (Archbishop Supreme Tartuffe), and the 2007 Village Voice OBIE Award for Sustained Excellence of Performance. De Shields is best known for his show stopping performances in the original Broadway productions of four legendary musicals: The Full Monty, for which he received Tony, Drama Desk and Astaire Award nominations, in addition to both the Outer Critics Circle and Drama League Awards; Play On! (Tony nomination), Ain’t Misbehavin’ (Emmy Award) and The Wiz (title role). He recently appeared in the critically-acclaimed Goodman Theatre production of Camino Real in Chicago. For more information go to www.andredeshields.com