Hanayui from KODO: The top founders and artists from legendary group, KODO, come together to bring the best of Japanese taiko to the Minnesota stage. Long recognized as visionaries of the artform world-wide, Hanayui features three top female artists in traditional and fresh new performances of dance, drumming and song. Also featured is Yoshikazu Fujimoto, long-considered the best Odaiko performer in the world.

Tiffany Tamaribuchi: Grand Champion, 2002 All Japan Odaiko Contest. With her two signature strengths of power and form, Tamaribuchi was proclaimed by contest judges to have “a perfect hit.” She brings 22 years experience touring and training professionally with several top companies and folk artists throughout Japan.

Megan Chao Smith: One of a handful of Americans to perform taiko professionally in Japan, Megan Chao Smith was the first foreigner ever to dance in the sacred Hana Matsuri festival in Aichi prefecture.

Regular performance adult tickets range from $25-$35 (Children/students: $10) and can be purchased by calling the Ordway Center box office at 651-224-4222 or by visiting www.muperformingarts.org. On February 11, 2012 at 2pm, there is a Family Concert, with a reduced rate, at which kids can join the taiko artists onstage and try the drums. 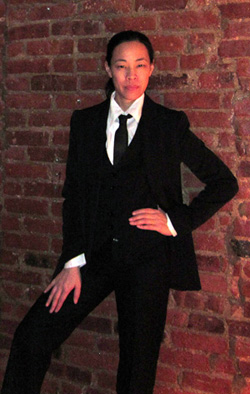 Lia made her stage debut as Liat in the National Tour of South Pacific, with Robert Goulet and Barbara Eden, and has since documented her colleagues and contemporaries in the arts, fashion and journalism as a photographer and videographer, collaborating with other artists, organizations and companies to establish their documentary photo archive and social media presence.