Performances are Tuesday, August 2 @ 8pm, Wednesday, August 3 @ 3pm and 8pm, and Thursday, August 4 @ 8pm, at the Hanesbrands Theatre – Milton Rhodes Center for the Arts, 209 N. Spruce Street in Winston-Salem, NC. Tickets are $40 and can be purchased online.

The New York Times called Knock Me A Kiss “a dandy play about the ill-advised marriage of W. E. B. Du Bois’s daughter,” and went on to say “suchrollicking fun that you may find yourself worrying at the intermission about whether there’s any way this production can successfully work itself around to the serious part of the story that you know lies ahead. But somehow it does, keeping its sense of humor but muzzling it just enough to allow some drama and poignancy to enter the mix. There are moments in the second act when the play seems less like a work about the past and more like a work from the past… an engaging, well-acted production that deserves a better theater and a longer run.”

Knock Me a Kiss is a fictional account inspired by the actual events surrounding the 1928 marriage of W.E.B. Du Bois’ daughter Yolande to one of Harlem’s great poets, Countee Cullen. The marriage marked the height of the Harlem Renaissance and was viewed as the perfect union of Negro talent and beauty. It united the daughter of America’s foremost Black intellectual, cofounder of the NAACP and publisher of Crisis Magazine, with a young poet whose work was considered to be one of the flagships for the New Negro movement. The marriage is a triumph of pomp and pageantry but fails to be a union of man and woman.

Larry Leon Hamlin founded the National Black Theatre Festival® in 1989. His goal was to unite black theatre companies in America and ensure the survival of the genre into the next millennium. With the support of Dr. Maya Angelou, who served as the Festival’s first Chairperson, NBTF was born. The ’89 Festival offered 30 performances by 17 of America’s best professional black theatre companies. It attracted national and international media coverage. According to The New York Times, “the 1989 National Black Theatre Festival® was one of the most historic and culturally significant events in the history of black theatre and American theatre in general.” Over 10,000 people attended. It lived up to its theme: An International Celebration and Reunion of Spirit. The NBTF enables Black theatre professionals to express cultural values and perspectives inherent to the African Diaspora candidly, dramatically and powerfully. Staged components of the NBTF foster the creation and sharing of new works while educational components document and preserve the history and traditions of the genre. Intense week-long interactions focus on renewing their commitment to preserve professional Black theatre and to revitalize its genre. Held biennially, the NBTF attracts more than 65,000 people during the six-day event. The 2011 National Black Theatre Festival will be held in Winston-Salem, NC, August 1 – August 6. 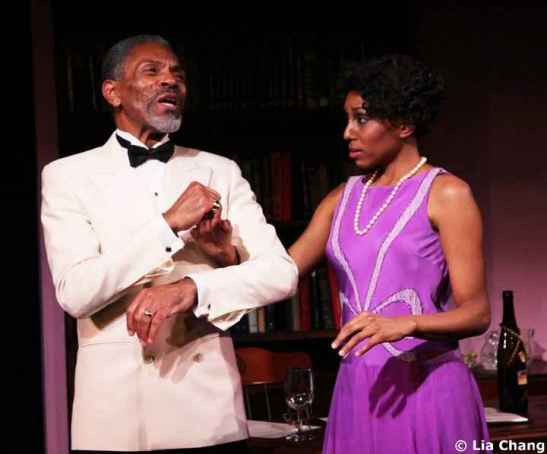 André De Shields as W.E.B. Du Bois with Erin Cherry, who play his daughter Yolande, in Charles Smith's Knock Me A Kiss. Photo by Lia Chang

In a career that has spanned four decades, De Shields is best known for his electrifying performances in the original Broadway productions of The Wiz in 1975 (title role), Ain’t Misbehavin’ in 1978 (Drama Desk nomination), Play On! in 1997 (Tony nomination) and The Full Monty in 2000, for which he received Tony, Drama Desk and Astaire Award nominations, in addition to both the Outer Critics Circle and Drama League Awards. His other Broadway credits include an autobiographical revue, Haarlem Nocturne, and the world premier of two new American plays: Mark Medoff’s Prymate (Drama Desk nomination) and Michael Jacob’s Impressionism, with Jeremy Irons and Joan Allen. He is the recipient of the 2009 National Black Theatre Festival’s Living Legend Award, the 2007 Village Voice OBIE Award for Sustained Excellence of Performance and the 2009 AUDELCO Award for Outstanding Performance in a Musical/Male. He won an Emmy Award for Outstanding Special Achievement for his performance in the 1982 NBC broadcast of Ain’t Misbehavin’. New York theatre audiences have seen De Shields in productions as varied as Cato at The Flea, as the farmer Old Banks opposite Charlayne Woodard, in the Red Bull Theater’s Off-Broadway production of The Witch of Edmonton at The Theatre at St. Clement’s, Neil Simon’s The Good Doctor at the Melting Pot Theatre, Let Me Sing at The George Street Playhouse, Lonnie Carter’s The Gulliver Trilogy at La MaMa e.t.c. and his solo work-in-progress Mine Eyes Have Seen The Glory: From Douglass to Deliverance at The Abingdon Theatre about abolitionist Frederick Douglass. At the Classical Theatre of Harlem, he has been seen as Makak in Derek Walcott’s Dream On Monkey Mountain, in the title roles of Archbishop Supreme Tartuffe, CALIGULA and King Lear, directed by Alfred Preisser. Regional audiences have witnessed him as Henry Drummond in Inherit The Wind, Willy Loman in Death Of A Salesman, Sheridan Whiteside in The Man Who Came To Dinner, Scott Joplin in Tin Pan Alley Rag, Vladimir in Waiting for Godot, Jacob Strand in Ibsen’s Ghosts (starring Jane Alexander), and the Stage Manager in Thornton Wilder’s Our Town. He recently appeared as the title character of Charles Smith’s The Gospel According to James, directed by Chuck Smith at the Victory Gardens Biograph Theater in Chicago. Upcoming projects include directing a staged reading of Jacqueline Malcolm’s The Trade at The Player’s Club in New York on July 19; jetting off to Italy after the Festival to be a teaching artist at the 1st Annual La MaMa Umbria International Master Acting Workshops; and directing the New Jersey-based Crossroads Theatre Company’s production of the Fats Waller revue Ain’t Misbehavin’, October 6-24. A triple Capricorn, he is the ninth of eleven children born and reared in Baltimore, Maryland. www.andredeshields.com.

Charles Smith, playwright of Knock Me A Kiss © Lia Chang

Playwright Charles Smith is a member of the Playwrights Ensemble at the Tony Award-winning Victory Gardens Theater in Chicago, alumni playwright of the Tony Award-winning New Dramatists in New York, and Head of the Professional Playwriting Program at Ohio University. His plays have been produced Off-Broadway and around the country by theaters such as Victory Gardens, The Acting Company, Indiana Repertory Theatre, People’s Light & Theatre Company, Goodman Theatre, Penumbra, Ujima Theatre Company, St. Louis Black Rep, New Federal Theatre, Seattle Repertory Theatre, and Berkeley Repertory Theater. His work has also been produced for the HBO New Writers Project, the International Children’s Theater Festival in Seattle, and the North Carolina Black Arts Festival. His play Pudd’nhead Wilson enjoyed a 22 city national tour and his plays Takunda and City of Gold enjoyed tours of the west coast. His other plays include Free Man of Color, which recently premiered in Australia after being awarded a Joseph Jefferson Award and John W. Schmid Award, both for Outstanding New Work. He is also author of two Emmy Award-winning teleplays, “Fast Break to Glory” and “Pequito.” A graduate of the Iowa Playwrights Workshop and recipient of the 2008 Ohio Arts Council Individual Excellence Award, Smith has received commissions from Victory Gardens, The Goodman, Seattle Rep, Indiana Rep, The Acting Company, and Ohio University. His most recent work, The Gospel According to James, was commissioned by Indiana Rep and is the result of a Joyce Award. The Gospel According to James received its World Premiere production at Indiana Rep and had a success run this Spring at the Victory Gardens Biograph in Chicago.

Director Chuck Smith has had 25 years of experience in African-American theater. He is resident director of the Goodman Theatre, where he has directed Ma Rainey’s Black Bottom, A Christmas Carol, and Vivisections from the Blown Mind. Smith is a founding member of the Chicago Theatre Company, where he was artistic director for four seasons, staging plays including Sizwe Banzi is Dead, Fathers and Other Strangers, Suspenders, the Jeff-winning musical Po’, and The Meeting. He has also directed at Fleetwood-Jourdain, The New Regal, Kuumba, Pegasus Players, New Federal Theater, ETA Creative Arts, Columbia College, and Chicago Black Ensemble Theater. He is also artistic director of the Chicago Historical Society’s Voices in History program and an artist-in-residence at Columbia College Chicago, where he facilitates the Theodore Ward playwriting contest.

Woodie King Jr. is the Founder and Producing Director of New Federal Theatre. Woodie King Jr.’s New Federal Theatre has presented over 200 productions in its 40-year history. Mr. King has produced and directed on Broadway, Off-Broadway, in Regional Theatres, and in universities across the United States. He co-produced For Colored Girls Who Have Considered Suicide When the Rainbow is Enuf (first produced by NFT and Joseph Papp’s Public Theatre), What the Wine Sellers Buy, Reggae and The Taking of Miss Janie (Drama Critics Circle Award). His directional credits are extensive and include work in film as well as theater. For more information, visit www.newfederaltheatre.org/