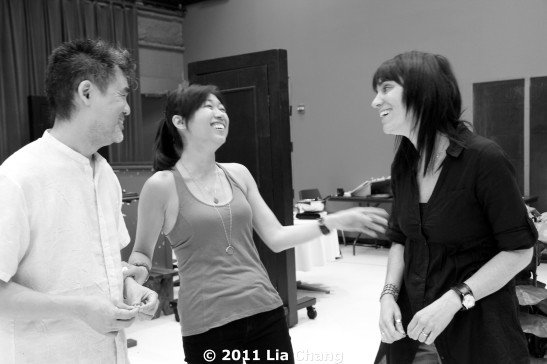 Chinglish Playwright David Henry Hwang, Angela Lin and director Leigh Silverman have a good laugh during a break from rehearsal in the Healy Rehearsal Room of the Goodman Theatre in Chicago on June 5, 2011. © 2011 Lia Chang

Chinglish, a razor-sharp new comedy about the challenges of doing business in a culture worlds apart from our own, also features James Waterston as Daniel, a Midwestern American businessman desperately looking to score a lucrative contact for his family’s sign-making firm who travels to the provincial capital of Guiyang, only to learn how much he doesn’t understand; Stephen Pucci as Peter, his Australian-born consultant who may be a fraud, Jennifer Lim as Xu Yan, the beautiful, seemingly supportive government official who talks the talk, Larry Zhang as Cai Guoliang, the Minister of Culture in Guiyang; Christine Lin as the Minister’s translator, Mrs. Zhao; and Johnny Wu as Judge Xu Geming and Bing. Lin plays Miss Qian, a translator, and Prosecutor Li, a government official that Daniel is trying to convince to give him the contracts to make the translated signs for Guiyang, a city in China.

Chinglish castmembers Johnny Wu and Angela Lin review their bios during a break from rehearsal outside the Healy Rehearsal Room of the Goodman Theatre in Chicago on June 5, 2011. © 2011 Lia Chang