The reading, sponsored by the Equal Employment Opportunity Committee of Actors’ Equity Association, is the culmination of a short workshop exploring casting an actor with a disability (Mr. Mitchell) in a role that is written as both disabled and non-disabled, and will be followed by a panel discussion. Admission is free, but seating is limited, RSVP to Pearl Brady at 212-869-8530, ext. 346, or by emailing eeo@actorsequity.org. 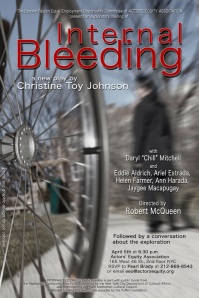 INTERNAL BLEEDING is also made possible in part with public funds from the Manhattan Community Arts Fund, supported by the New York City Department of Cultural Affairs and administered by Lower Manhattan Cultural Council. Additional funding has been made possible by the Puffin Foundation.
www.christinetoyjohnson.com