Lia Chang: Photo Call of BD Wong and the Cast of Heading East at the Asia Society 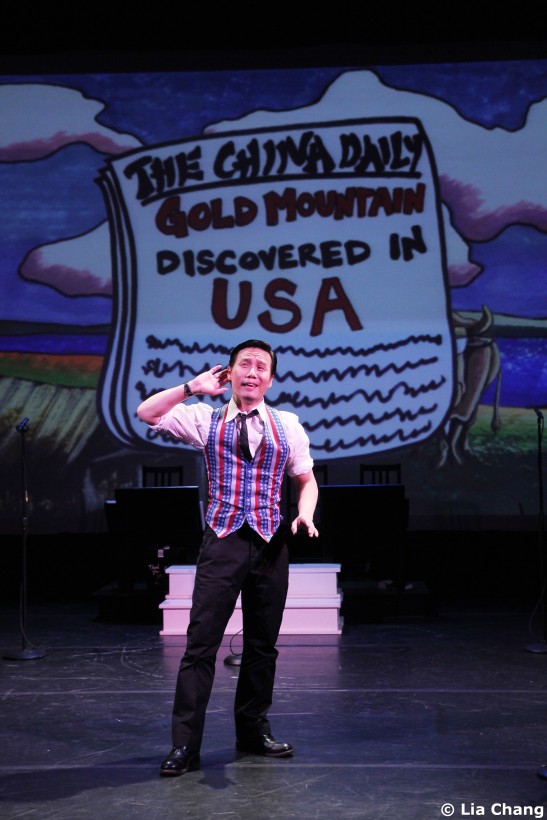 BD Wong as Siu Yee Tong in Heading East, a musical by Robert Lee and Leon Ko, at the Lila Acheson Wallace Auditorium at Asia Society in New York, May 24-26, 2010. © Lia Chang

BD Wong (center) and the cast of Heading East, a musical by Robert Lee and Leon Ko, at the Lila Acheson Wallace Auditorium at Asia Society in New York, May 24-26, 2010. © Lia Chang

Tonight’s show is sold out, but you can still get tickets to the May 25th and 26th performances through the box office 212-517-ASIA or Tickets.AsiaSociety.org. Proceeds from the Heading East concert performances, directed by Darren Lee and co-produced by Andrew Asnes, will benefit the Asia Society.

BD Wong (center) and the cast of Heading East, a musical by Robert Lee and Leon Ko, at the Lila Acheson Wallace Auditorium at Asia Society in New York, May 24-26, 2010. © Lia Chang

Heading East is set primarily in San Francisco from 1848-1981. This funny yet gripping musical tells the story of Siu Yee Tong, a brazen young man who travels from drought- and famine-ridden China to the shores of Gold Rush-era California determined to be the next great American success story. Siu Yee’s lifelong quest to reinvent himself plays out against the tumultuous backdrop of a century and a half of American history: although the narrative spans 133 years, the characters age over the course of a single lifetime. 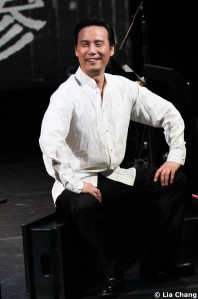 BD Wong as Siu Yee Tong in Heading East, a musical by Robert Lee and Leon Ko, at the Lila Acheson Wallace Auditorium at Asia Society in New York, May 24-26, 2010. © Lia Chang

Cindy Cheung in Heading East, a musical by Robert Lee and Leon Ko, at the Lila Acheson Wallace Auditorium at Asia Society in New York, May 24-26, 2010. © Lia Chang

Robert Lee (Books & Lyrics) is a lyricist and librettist whose original musicals include Journey to the West (music by Leon Ko), Heading East (music by Ko) and The Sweet By and By (book and music by Maria .S. Seigenthaler). His work as a music director includes the recordings Stage 1 and Stage 2. He and Ko received the Richard Rodgers Development Award for Heading East and an AT&T First Stage Grant for their musical Chinese Hell, the latter developed with producer Margo Lion and San Francisco’s American Conservatory Theater. Most recently, Robert and Leon were commissioned by East of Doheny to create a musical stage adaptation of Jean Kerr’s Please Don’t Eat the Daisies. They are currently at work on an original musical for London’s Theatre Royal Stratford East with a planned 2011 opening. Robert is an alumnus of Princeton University and the Graduate Musical Theatre Writing Program at NYU’s Tisch School Of The Arts (where he currently serves on the faculty), and is an Artistic Associate at TRSE, where he leads its Musical Theatre Writing Workshop with composer Fred Carl (the workshop is the subject of the 2005 film Rappin’ at the Royal from Blast Films). 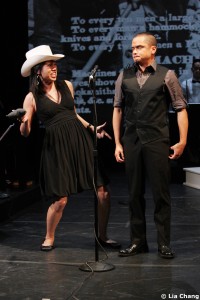 Angela Lin and Rodney To in Heading East, a musical by Robert Lee and Leon Ko, at the Lila Acheson Wallace Auditorium at Asia Society in New York, May 24-26, 2010. © Lia Chang

Leon Ko (Music)
Leon Ko’s music for The Good Person of Szechwan, The Legend of the White Snake and Field of Dreams won Best Score honors at the 2003, 2006 and 2009 Hong Kong Drama Awards. He and collaborator Robert Lee received a Richard Rodgers Development Award for their musical Heading East. For his work on the film Perhaps Love, he received a Golden Horse Award for Best Original Film Song, a CASH Golden Sail Music Award for Best Alternative Composition as well as a Hong Kong Film Award, an Asia-Pacific Film Festival Award and a Golden Bauhinia award for Best Film Score. He was nominated for a Golden Horse Award and a Hong Kong Film Award in 2008 for his score to the film The Warlords. He was the music director of Hong Kong pop legend Jacky Cheung’s 2004 world tour of Snow.Wolf.Lake, and The Year of Jacky Cheung World Tour ’07, penning a 30-minute musical for the latter. In 2006, he wrote a new opening song and incidental music for the classic Cantonese opera Princess Changping for Chor Fung Ming Troupe. In 2009, he wrote an opening number and finale for Liza Wang’s musical Liza the Diva. Other works include the scores to the movie Mr. Cinema, the stage musical Angel Falls for Hong Kong Dance and the stage play Cross-Mopolitan for Chung Ying Theatre. Leon is currently working on a stage adaptation of Please Don’t Eat the Daisies for the New York stage.

Lex Liang (Production design)
Lex Liang’s work includes scenic and costume design for theatre, film and dance, as well as architectural interior design and project management. Liang’s recent theatre work includes (NYC/Off-Broadway): The Yellow Wood (NYMF), Secrets of a Soccer Mom (Snapple Theater), After Luke/When I Was God (Irish Rep., Tina Santi Flaherty Award nomination for Best Design of a Play), and Made in Heaven (SoHo Playhouse). He was Resident Scenic and Costume Designer at Penobscot Theatre for 3 years, designing over 25 productions – most recently Spunk and Hedwig and the Angry Inch (as guest artist). Design for dance includes Gibney Dance at Baryshnikov Dance Center, Unbounded for the Internationale Tanzmesse in Dusseldorf, Germany, and View Partially Obstructed in Montreal. Liang’s film work includes Love is Hell and The Louisiana Conversation, both shot in NYC. His architectural design projects include RED, a vintage boutique in the East Village; Lemonade, a children’s boutique on the Upper East Side; VBAR St. Marks, a bar and restaurant in the East Village; and most recently 25 Park, a women’s l’atelier boutique on the Upper East Side, Bridgehampton, and Malibu. He is a 2010 Princess Grace Award nominee for theatrical design.

All text, graphics, articles & photographs: © 2000-2010 Lia Chang Multimedia. All rights reserved. All materials contained on this site are protected by United States copyright law and may not be reproduced, distributed, transmitted, displayed, published or broadcast without the prior written permission of Lia Chang. You may not alter or remove any trademark, copyright or other notice from copies of the content. for permission, please contact Lia at liachang@hotmail.com.