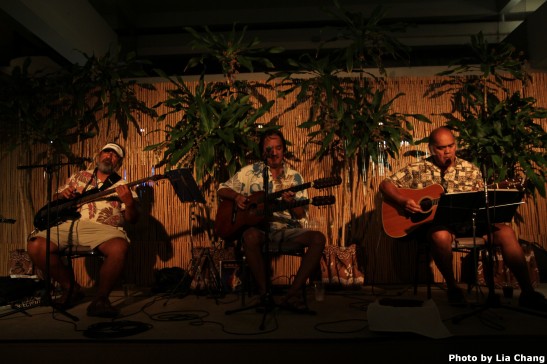 Aaron Mahi, George Kuo and Martin Pahinui at the Waikiki Beach Marriott on May 16, 2010. Photo by Lia Chang

I am visiting Honolulu with my sister Tami to attend the graduation ceremony of our sister Karina Umehara. She is getting an MBA from Hawaii Pacific University and we are so proud of her. My friend Cathy Foy, an actress and singer who recently started ALL Entertainment LLC which provides custom designed Polynesian and Continental entertainment for family and corporate events, picked me up from the airport and whisked me off to the Waikiki Beach Marriott Hotel for “Kiho`alu Sundays”.

For more than a decade, her husband Aaron Mahi, George Kuo and Martin Pahinui, have been performing every Sunday from 6:30 PM to 9:30 PM at the Waikiki Beach Marriott Hotel, Moana Terrace. Their performances are known as “Kiho`alu Sundays” because they play traditional Hawaiian music with Hawaiian Slack Key Guitar stylings (kiho`alu – to loosen the guitar strings to a particular tuning and play Hawaiian finger-picking e guitar). Their blend of instrumentation mastery and warm vocal harmonies are chicken-skin moments (goose bumps on the arm from feeling the deep soulful character of the music) reminiscent of an older, romantic, traditional style of Hawaiian folk art music with spontaneous riffs and passages being created only for the moment. Their stories in introducing the songs provide special insight on the older culture of Hawaii relevant to the Kaona of the songs (special meanings, secret poetic references and similes) involving romantic affairs and adoration, and tributes to special persons and places. 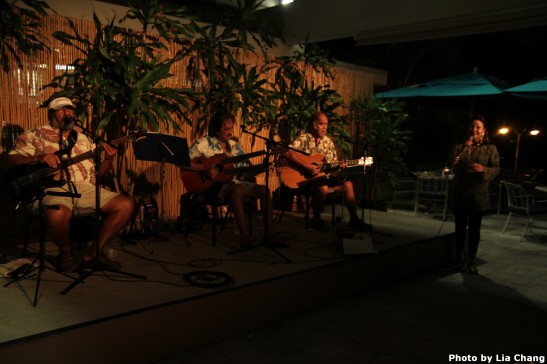 Aaron Mahi, George Kuo and Martin Pahinui with special guest Cathy Foy at the Waikiki Beach Marriott on May 16, 2010. Photo by Lia Chang

Their album “Ho’olohe”(to listen), was a final nominee at the 2004 Na Hoku Hanohano Awards (similar to the Grammy Awards for Hawaii) for the categories of: Hawaiian Album of the Year and Best Male Vocalist (Martin Pahinui) of the Year. George Kuo (6 and 12 string slack key guitar), Martin Pahinui (6 string slack key guitar), and Aaron Mahi (bass guitar) present the traditional folk art of Hawaiian slack key guitar and vocal melodies. Each of them are highly accomplished and recognized Hawaiian musicians that have been performing together many years, for the pure enjoyment of perpetuating traditional music and reciprocating and embellishing each other’s talents, to where these feelings become instilled in all audiences. 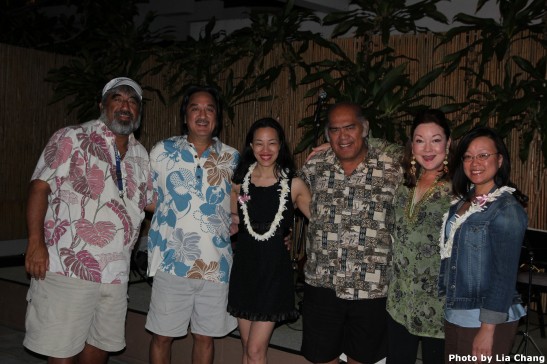 Cathy joined the Trio onstage for a few numbers. If you are a fan of slackkey guitar and traditional Hawaiian music like my sister Tami, you will want to experience Kino alu Sundays with George Kuo, Martin Pahinui and Aaron Mahi at Waikiki Beach Marriott Hotel. It was a very lovely and relaxing evening. After 11 hours of traveling, it was the perfect way to embrace the spirit of Aloha. There is no cover charge and there is free parking in the Marriott garage with validation.

Check back for video of the night.
About the artists
GEORGE KUO – Known for perpetuating traditional Hawaiian slack key guitar styling (kiho`alu), George started playing slack key in the 1970’s at garage jam-sessions, bars, concerts, and parties with friends and old–time slack key masters Raymond Kane, Sonny Chillingworth, Gabby Pahinui, Leland “Atta” Isaacs, Leonard Kwan, Tommy Solomon, Uncle Fred Punahoa, and steel guitar master Barney Isaacs. George shares the feelings and enjoyment of a by-gone era in Hawaii that he was fortunate to have been a part of. George formed a group in 1980 named the Kipapa Rush Band, and later joined Eddie Kamae and the Sons of Hawaii in 1986, and currently performs steadily at the Waikiki Marriott Hotel and in concerts across the United States and Japan with Martin Pahinui, and Aaron Mahi. George has done several slack-key recordings, most recently on the Dancing Cat/Windham Hill records produced by George Winston.

MARTIN PAHINUI – Martin is known for his out-of-this-world singing and legendary family musical tradition. Martin’s incredible voice range from a low deep bass to a rich high and haunting falsetto is reminiscent of his legendary father, Gabby Pahinui. Martin grew up listening and watching his dad and other legendary performer friends gather at their home for rehearsals and memorable jam sessions that sometimes lasted for several days. Martin played on his father’s recordings with his brothers Cyril, Bla, Philip, and master slack-key guitarists Leland “Atta” Isaacs and Sonny Chillingworth. Martin performed at nightclubs on Maui for many years before coming home and playing with the Peter Moon Band in the 1980’s and 1990’s. Currently Martin performs with George Kuo and Aaron Mahi at their regular engagements and concert tours. Martin has done many recordings with his family on Panini Records; The Peter Moon Band (Kanikapila Productions); a solo CD Martin Pahinui (Mountain Apple Productions); and with George Kuo, Dennis and David Kamakahi, on a CD titled Hui Aloha, and with George Kuo, Aaron Mahi, and Bobby Ingano on the CD, Ho`olohe (Dancing Cat/Windham Hill Records).

AARON MAHI – Aaron is one of Hawaii’s living legends in traditional Hawaiian music. He has a tremendous repertoire and knowledge of the hidden meanings of traditional Hawaiian songs, and combines traditional Hawaiian with formal music arranging, and has achieved the highest accolades in classical music circles. Upon graduating with distinction from the Hart School of Music, he performed as a bassist and later became the assistant conductor for the Honolulu Symphony, and currently, Aaron has been the conductor of the City and County of Honolulu’s Royal Hawaiian Band since 1980. Aaron is also fluent in Hawaiian language and perpetuates many of the old ways that he spent time learning from his family and from many elder Hawaiians that were famous musicians, arrangers, and songwriters. Aaron is a graduate of Kamehameha Schools, famous for its Hawaiian musical tradition and he learned and performed with his classmates, many who became prominent Hawaiian musicians. Aaron is Hawaii’s musical ambassador to the world as he performs with various Hawaiian shows and was the conductor for 24 years from 1981 – 2005 with the Royal Hawaiian Band all over the world. Aaron has recorded with and arranged recordings with many legendary Hawaiian artists. 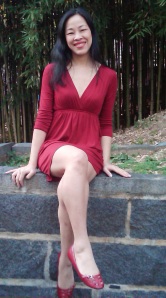