62 years after Wataru “Wat” Misaka, a Nissei-American who was born, raised, and is still living in Utah, became the very first draft pick of the New York Knicks in 1947, he will be honored by the New York Knicks at Madison Square Garden on December 20, 2009.

His little known story is told in the documentary, TRANSCENDING – THE WAT MISAKA STORY, made by the award-winning husband and wife filmmaking team Christine Toy Johnson and Bruce Alan Johnson.

Overcoming the national political climate during World War II, Wat was a star player for the University of Utah 1944 and 1947 championship teams, taking 2 years off in between to serve in the U.S. Army. His perseverance and loyalty to his teammates, other Nissei friends (including those interned at the Topaz camp) and his family are a testament to the unflappable Japanese American spirit. 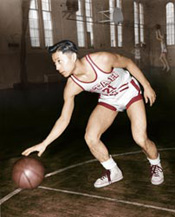 Wat, a 5-foot 7-inch guard, appeared in three games and scored seven points for the 1947-48 Knicks before he was cut for reasons never made clear to him. But he recalls his brief stint in the NBA as a pleasant one. He turned down an offer to play for the Harlem Globetrotters so that he could return to school to earn a degree in engineering.

TRANSCENDING – THE WAT MISAKA STORY includes in depth interviews with Wat and his family, teammates from his championship teams (including All-American star Arnie Ferrin of the Minneapolis Lakers) sports authorities (including Knicks Historian Dennis D’Agostino and ubiquitous New York sportscaster Spencer Ross), and many who continue to look up to him as both a role model and personal hero. The film also has video clips from his 1944 and 1947 college games, rare footage from a visit to the Topaz Internment Camp, and countless photos of his triumphant career.

The filmmakers were given two consecutive grants from the California Civil Liberties Public Education Program. The film has won the “Gold Kahuna Award” from the Honolulu International Film Festival and the “Emerging Eye Directorial Discovery Award” from the Roving Eye Documentary Film Festival.

On August 8, 2010, Sport in Society gave Wat their highest honor, the “True Hero in Sports” Award and the Rhode Island International Film Festival gave him their first ever “Roger Williams Independent Spirit Award”. The filmmakers surprised Wat and his family with the debut of his profile in the Naismith Basketball Hall of Fame.

On August 10, 2009, Wat returned to NYC and the Garden for the first time in 62 years, where he was given a warm welcome by the Knicks organization, chronicled beautifully by George Vecsey in the New York Times.

On October 14, 2009, Wat was invited to the White House, as President Obama acknowledged Wat’s achievements in his introductory remarks during the signing of his Executive Order reinstating an Initiative for Asian American Pacific Islanders.

The DVD of TRANSCENDING – THE WAT MISAKA STORY, with a new original score by Scot Stafford, will be released in time for March Madness, 2010. Check out http://www.watmisaka.com.

Lia Chang is an actor, performance and fine art botanical photographer, and a multimedia journalist. A former syndicated arts and entertainment columnist for KYODO News, Lia is the New York Bureau Chief for AsianConnections.com. As a photographer and videographer, Lia is frequently tapped to collaborate with artists, organizations and companies in building their brand and establishing their documentary photo archive. She has been documenting her colleagues and contemporaries in the arts, fashion and journalism since making her stage debut as Liat in the National Tour of South Pacific, with Robert Goulet and Barbara Eden.