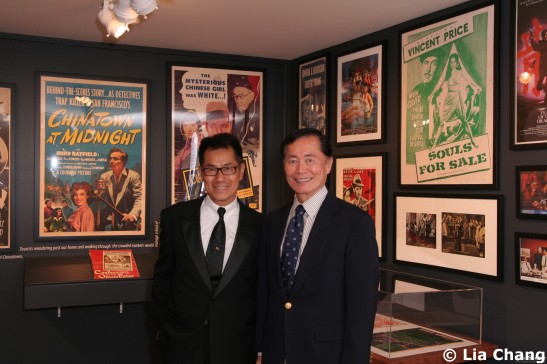 I am at the opening night reception of Hollywood Chinese: The Arthur Dong Collection exhibition at the Chinese American Museum in Los Angeles, where my friend filmmaker/curator Arthur Dong is giving George Takei and his husband Brad Altman a private tour of the exhibition.

Hollywood Chinese: The Arthur Dong Collection exhibition is based on the Oscar®-nominated filmmaker’s critically-acclaimed, award winning documentary, Hollywood Chinese (2007), which shines the spotlight on a little known chapter of American film history, a century-deep history of Chinese American cinematic contributions, both in front of and behind the camera, and the vivid depictions of how the Chinese have been imagined in Hollywood movies throughout the decades. The exhibition is on view at the Chinese American Museum (CAM) at the El Pueblo de Los Angeles Historical Monument through May 30, 2010. 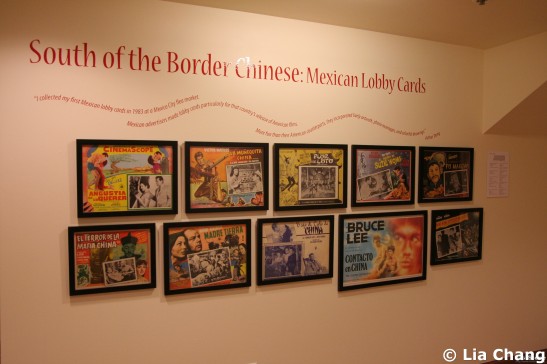 South of the Border Chinese: Mexican Lobby Cards in Hollywood Chinese: The Arthur Dong Collection on view at the Chinese American Museum in Los Angeles through May 30, 2010. © Lia Chang

Captured and interpreted through the lens of the Chinese American experience, Hollywood Chinese: The Arthur Dong Collection is organized into a series of themes that define early Chinese American film-making and features classic and contemporary movie memorabilia replete with vintage movie posters, lobby cards, film stills, scripts, press materials. Drawn from Dong’s own private collection and amassed during the 10-year research for his production, the filmmaker’s passion for film is on full display in this sampling of the largest known collection on the subject of Chinese in American feature films–over 1,000 items– owned by a single collector. 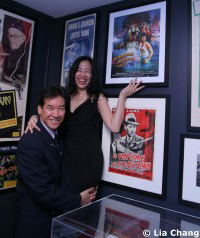 Since the early 1900’s and continuing to present-day, a tangled web of race and representation has existed between Hollywood and the Chinese working in the film industry. The dual, conflicting identities of Chinatown, perceived by early Hollywood as being both dark and mysterious, dangerous and sinister, found expression in iconic films such as Roman Polanski’s Chinatown (1974) and a string of “B” movies such as Captured in Chinatown (1935). Portrayals of martial arts heroes and exotic vixens were immortalized in roles played by Bruce Lee and Jackie Chan, Nancy Kwan and Anna May Wong. The casting of non-Asian actors and actresses to play Asian roles was an industry practice that paved the way for the yellowface phenomenon exemplified in popular classics such as The Good Earth (1937), where German-born Luise Rainer played a Chinese peasant (beating out legendary actress Anna May Wong for the role), and the Charlie Chan detective series, where Swedish actor Warner Oland, among others, solved mysteries while dispensing fortune-cookie proverbs.

A section devoted to the cross-over success of Nancy Kwan, one of Hollywood’s most visible Eurasian actresses who played a pivotal role in driving the acceptance of Asian actors in major Hollywood film roles. © Lia Chang

Among the many exhibition highlights are the surviving archive of pioneer Chinese American filmmaker James B. Leong, who produced the 1921 film, Lotus Blossom; rare production photos from the recently discovered 1916 film, The Curse of the Quon Gwon, the earliest known feature film directed by an Asian American, San Francisco native, Marion Wong; and a section devoted to the cross-over success of Nancy Kwan, one of Hollywood’s most visible Eurasian actresses who played a pivotal role in driving the acceptance of Asian actors in major Hollywood film roles.

Oscar® statuette won by Chinese American Cinematographer, James Wong Howe for the Rose Tattoo in 1955, on loan courtesy of Don Lee, is on display. © Lia Chang

A selection of film excerpts from the documentary Hollywood Chinese plays in a loop on a projection wall, in the Wall-of-Fame room highlighting the distinguished company of Chinese and Chinese American Academy Award® winners including Ang Lee (Brokeback Mountain, 2005), winner and five-time nominee, documentarian Freida Lee Mock (Maya Lin: A Strong Clear Vision, 1994) and two-time winner and ten-time nominee, James Wong Howe (The Rose Tattoo,1950) (Hud,1963). Howe’s first Oscar® statuette won for his cinematography work in the movie, The Rose Tattoo, is on view in Hollywood Chinese for a limited time.

A selection of film excerpts from the documentary Hollywood Chinese, this one about the recently discovered 1916 film, The Curse of the Quon Gwon, the earliest known feature film directed by an Asian American, San Francisco native, Marion Wong, plays in a loop on a projection wall in the Wall-of-Fame room highlighting the distinguished company of Chinese and Chinese American Academy Award® winners. © Lia Chang

The full-colored exhibition catalog featuring an essay authored by Academy Award®-nominated filmmaker Renee Tajima-Pena (Who Killed Vincent Chin, 1988) is available for purchase at the CAM gift shop, as well as posters and DVDS of Hollywood Chinese.

ABOUT ARTHUR DONG
Arthur Dong previously co-curated the exhibition, Chop Suey on Wax: The Flower Drum Song Album (2006), for the Chinese Historical Society Museum in San Francisco. His film, Hollywood Chinese (2007), is the final installment of a trilogy, which also includes Sewing Woman (1982) and Forbidden City, U.S.A. (1989), that focuses on Chinese America. His other film collection, Stories from the War on Homosexuality (2003), brings together his documentaries Family Fundamentals (2002), Licensed to Kill (1997), and Coming Out Under Fire (1994). Dong’s work has been honored with an Academy Award® nomination, three Sundance awards, five Emmy nominations, the Peabody Award, the Berlin Film Festival’s Teddy Award, Asia’s Golden Horse Award, as well as a number of public service awards, including the Historymakers Award from the Chinese American Museum. He has also earned two Rockefeller Fellowships in Media and a Guggenheim Fellowship in Film. Dong served on the Board of Governors of the Academy of Motion Picture Arts and Sciences, representing the Documentary Branch, and currently represents the Academy on the National Film Preservation Board at the Library of Congress.

ABOUT HOLLYWOOD CHINESE (THE DOCUMENTARY)
Winner of the 2007 Golden Horse Award for Best Documentary, Asia’s equivalent to the Oscars®, Hollywood Chinese (2007) is a captivating revelation on a little-known chapter of cinema: the Chinese in American feature films. From the first Chinese American film produced in 1916, to Ang Lee’s triumphant Brokeback Mountain nine decades later, Hollywood Chinese presents a fascinating portrait of actors, directors, writers, and iconic images to show how the Chinese have been imagined in movies, and how filmmakers have and continue to navigate an industry that was often ignorant about race, but at times paradoxically receptive. The story of Hollywood Chinese is told through eleven of the industry’s most accomplished Chinese and Chinese American film artists who share personal accounts of working in film. Ang Lee, Wayne Wang, Joan Chen, David Henry Hwang, Justin Lin, B.D. Wong, Nancy Kwan, Tsai Chin, Lisa Lu, James Hong, and Amy Tan are among the storytellers who have wrestled with being the other in Hollywood. Non-Asian personalities are also featured to point out the controversy over portraying the Chinese in yellowface. Two-time Oscar® winner Luise Rainer (The Good Earth, 1937), character actor Christopher Lee (Fu Manchu, 1960-65), and 1940s matinee idol Turhan Bey (Dragon Seed, 1944) give first-hand recollections on being yellow on the silver screen. Hollywood Chinese was produced, directed, written, and edited by Arthur Dong.

ABOUT THE CHINESE AMERICAN MUSEUM
The Chinese American Museum (CAM) is jointly developed and operated by the Friends of the Chinese American Museum (FCAM) and El Pueblo de Los Angeles Historical Monument, a department of the City of Los Angeles. Located within the El Pueblo Plaza in downtown Los Angeles, CAM is housed in the last surviving structure of the City’s original Chinatown. CAM’s mission is to foster a deeper understanding and appreciation of America’s diverse heritage by researching, preserving, and sharing the history, rich cultural legacy, and continuing contributions of Chinese Americans. The Chinese American Museum is located at 425 North Los Angeles Street in El Pueblo de Los Angeles Historical Monument, across from Union Station. Hours are 10 a.m.– 3 p.m., Tuesday – Sunday. Admissions are suggested donations of $3 for adults and $2 for seniors and students. Members are admitted free. For more information about the Museum, please visit our new website at http://www.camla.org or follow up on:
Facebook: search for “Chinese American Museum”
Flickr: http://www.flickr.com/photos/camla_org
Twitter: ChinAmerMuseum
Hollywood Chinese: The Arthur Dong Collection
Oct. 24, 2009 – May 30, 2010