Lia Chang: “Hollywood Chinese: The Arthur Dong Collection” on view at the Chinese American Museum in Los Angeles in October 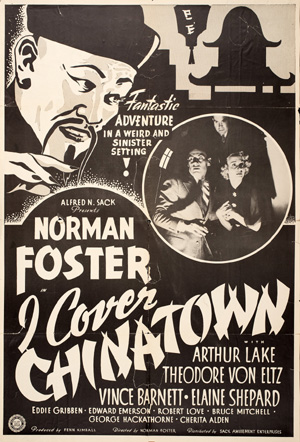 I am very excited to see the Chinese American Museum’s (CAM) new exhibition of movie memorabilia, which will be on view in “Hollywood Chinese: The Arthur Dong Collection,” in Los Angeles, from October 24, 2009 through May 30, 2010.

Arthur Dong (Licensed to Kill, Coming Out Under Fire, Forbidden City, U.S.A.) is an Academy Award® nominee and triple Sundance award-winning filmmaker. In 2007, he received the Best Documentary Award for “Hollywood Chinese,” his documentary on the Chinese in American feature films, at the Golden Horse Awards in Taipei, Taiwan. Often referred to as the Chinese equivalent of the Oscars,” The Golden Horse Awards are the most prestigious honors in Asia for Chinese-language cinema, covering categories modeled after those for the Academy Awards.

Collected by the filmmaker during his ten years of research for “Hollywood Chinese,” Dong served as guest curator for the exhibition, handpicking over 1,000 items from his archive, including a selection of posters, lobby cards, stills, scripts, press material, and other artifacts dating from 1916 to present-day offer vivid graphic examples of how the Chinese have been imagined in the movies during the last century. The show also documents the work of Chinese and Chinese American film artists through the decades who have triumphed as well as struggled with an industry often ignorant of race.

In addition to iconic depictions evidenced by material from films such as “The Good Earth,” “The Vengeance of Fu Manchu,” “Charlie Chan in Honolulu,” and “Flower Drum Song,” highlights of the exhibition include the surviving archive of pioneer Chinese American filmmaker James B. Leong, who produced the 1921 film, “Lotus Blossom,” in Los Angeles, and rare production photos from the recently discovered 1916 film, “The Curse of Quon Gwon,” the earliest known feature film directed by an Asian American, San Francisco native Marion Wong. Other themes include a look at how cinema exploited the Chinatown mystique, films reflecting anti-Communist attitudes, and a selection of lobby cards from Mexico. On special display will be the first Oscar ® won by a Chinese American, the eminent cinematographer, James Wong Howe, for his work on “The Rose Tattoo (1955).”

Major funding for “Hollywood Chinese: The Arthur Dong Collection” has been provided by the Academy of Motion Picture Arts and Sciences. The Oscar ® statuette is on loan courtesy of the James Wong Howe Estate. For more information, http://www.camla.org/upcoming.html For more information about “Hollywood Chinese,” please visit: www.hollywoodchinese.com

CHINESE AMERICAN MUSEUM:
The Chinese American Museum (CAM) is jointly developed and operated by the Friends of the Chinese American Museum (FCAM) and El Pueblo de Los Angeles Historical Monument, a department of the City of Los Angeles. Located within the El Pueblo Plaza in downtown Los Angeles, CAM is housed in the last surviving structure of the City’s original Chinatown. CAM’s mission is to foster a deeper understanding and appreciation of America’s diverse heritage by researching, preserving, and sharing the history, rich cultural legacy, and continuing contributions of Chinese Americans. Hours are 10 a.m. – 3 p.m., Tuesday – Sunday. Admissions are suggested donations of $3 for adults and $2 for seniors and students. Members are admitted free.

Lia Chang is an actor, performance and fine art botanical photographer, and a multimedia journalist. She has been documenting her colleagues and contemporaries in the arts, fashion and journalism since making her stage debut as Liat in the National Tour of South Pacific, with Robert Goulet and Barbara Eden. She is currently working on several botanical portrait commissions for the New York City Health and Hospital Corporation Art Collection and on a book of portraits of her favorite Asian American men in the arts and space. The former syndicated KYODO News is the New York Bureau Chief for AsianConnections.com.