KCNA report: Laura Ling and Euna Lee sentenced to 12 years in a North Korean hard labor prison, their families take to the airwaves to respond by Lia Chang 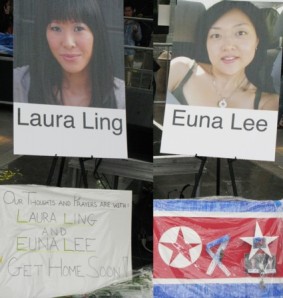 Signs at a vigil in New York for journalists Laura Ling and Euna Lee, who have been by sentenced by North Korea to 12 years hard labor in prison. Photo by Lia Chang

In the wake of the official report released by the Korean Central News Agency (KCNA) on June 16 detailing why American journalist Laura Ling and producer Euna Lee were arrested on March 17, tried for “crossing the border” and shooting video footage for “an anti-DPRK smear campaign over its human rights issue” in a closed court on June 4, and subsequently sentenced to 12 years in a hard labor prison on June 8, their family members took to the airwaves to plead with the North Korea government to release their loved ones.

Ms. Ling and Ms. Lee, two employees of San Francisco-based Current TV – a media venture founded by former Vice President Al Gore – were arrested March 17 near the North Korean border while reporting on refugees living in China. According to the report, both women, accused by North Korea of crossing into the country illegally from China and committing “hostile acts,” admitted and accepted the judgment. The families have not heard from the two women since the sentencing on June 8. It has been three months since they were first detained.

Last night, Lisa Ling was joined by her sister Laura’s husband Iain Clayton, and Lee’s husband Michael Saldate on Anderson Cooper 360 and this morning they talked to Diane Sawyer on Good Morning America , while Lisa and Laura’s cousin Angie Wang talked to Harry Smith on The Early Show.

Here are excerpts from the detailed KCNA report © Korea News Service (KNS)
At dawn of March 17 unidentified two men and two women covertly crossed the River Tuman to intrude into its bank of the DPRK side in Kangan-ri, Onsong County, North Hamgyong Province. The two women were arrested on the spot.

The investigation proved that the intruders crossed the border and committed the crime for the purpose of making animation files to be used for an anti-DPRK smear campaign over its human rights issue.

The preliminary investigation proved that they had a confab on producing and broadcasting a documentary slandering the DPRK with Mitch Koss, executive producer of programming of the Current TV, David Neuman, president of programming, and David Harleston, head of the Legal Department of Current TV, and other men in Los Angeles, U.S. in January.

A trial of the accused was held at the Pyongyang City Court from June 4 to 8.

At the trial the accused admitted that what they did were criminal acts committed, prompted by the political motive to isolate and stifle the socialist system of the DPRK by faking up moving images aimed at falsifying its human rights performance and hurling slanders and calumnies at it.

The prison term is counted from March 22, 2009, when the accused were detained and it was pronounced that the judgment is unappealable.

The criminals admitted and accepted the judgment.

We are following with a high degree of vigilance the attitude of the U.S. which spawned the criminal act against the DPRK.”

The families of Laura Ling and Euna Lee responded to the KCNA by releasing this statement on June 16, 2009:
“We appreciate that the Government of North Korea released the account of the charges against Laura and Euna. Whatever those charges to which they have confessed, we are sorry and know that they are as well. We desperately hope that the Government of North Korea will show compassion and allow Laura and Euna to come home to their families.”