The U.S. Immigration Station on Angel Island, which has been on the annual list of America’s 11 Most Endangered Places since 1999, re-opened after more than three years of restoration and preservation work on February 15, 2009. The Angel Island Immigration Station Foundation (AIISF), the nonprofit partner of California State Parks and the National Park Service, along with Save America’s Treasures and American Express Partners in Preservation, two of the National Trust for Historic Preservation’s valued partnerships, contributed much-needed funding in the efforts to preserve, restore and interpret the historic immigration station, which is now open to the public for tours.

In recognition of my grandmother’s 90th birthday, I am sharing this article I wrote about my grandmother’s experience being detained at Angel Island, which appeared online in the September 19, 2000 edition of A. Media, Inc. 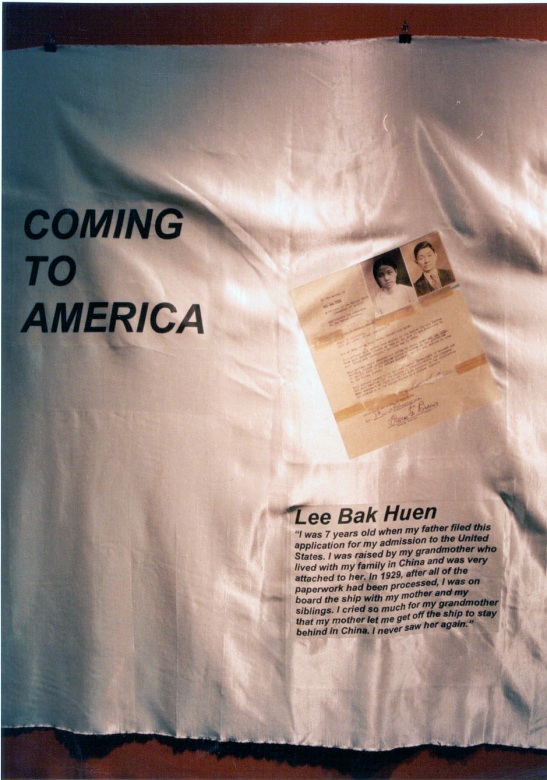 “What it was really like.”
“My name is Lee Bak Huen. In 1937, I was 15 years old when Japan bombed China and many of the people in my grandmother’s village were killed. At the time, my father, brother and two sisters lived in Locke, Ca, and my father sold clothes to farmers to support us. Fearing for my life, he sent my passport and a booklet that detailed everything about my family and my home for me to study. He managed to scrape together $300 Hong Kong dollars, enough for third class passage on the SS President Hoover. My journey from Hong Kong to San Francisco took 18 days. I slept on a hammock and was seasick the entire time.

I expected to get off the ship in San Francisco, but was taken to Angel Island instead, and detained. My father hired a lawyer to facilitate the processing. The Chinese interpreter who interrogated me was so rude that she confused me with many questions. I was asked how many stones it took to build my house in China, how many sisters I had, the year I was born, why didn’t I come with my mother? She asked me to draw a picture of my house in China. My family home had four or five bedrooms, but I lived in my grandmother’s house in a different village five hours away. I was just a poor, uneducated village girl-how would I know these things? 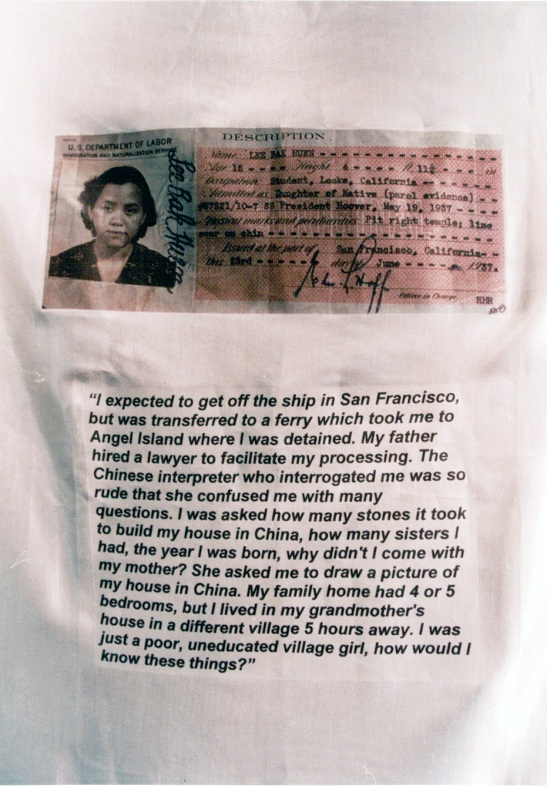 Today it is eight months since my daughter Beverly died. She wanted to come here with me, but I resisted until now. My granddaughters Lia and Tami have brought me by ferry from San Francisco to see the Angel Island Immigration Station Museum, housed in the old men’s detention barracks. The memories of being detained here haunted me.

The barbed wire fence in front of the barracks takes me back to when I was 15, just arriving on this shore. We were kept in separate quarters from the men and the bunk beds were stacked three high. We were kept under lock and key; it was like being in jail. They lined us up like convicts for meals and fed us dry olives with sugar. People committed suicide in the bathrooms out of despair. I heard stories of ghosts. The officials wanted to make sure I wasn’t a “paper” person (someone with false identity papers), but I looked a lot like my brother and that was my saving grace. Once our pictures were compared, I was released. I was detained for over a month. I considered myself lucky; others were held as long as two years and those who were not approved were forced to return to China. I’m told over 9000 Chinese were sent back.

Nancy Chang with her granddaughters Lia and Tami Chang in front of the memorial at The Angel Island Immigration Station.

That was a long time ago. I will be 80 this year. I am at peace now. If my health is good next year, I would like to come back and have a picnic on this beautiful island, Angel Island State Park.”

Franklin Odo, chief of the Asian Division of the Library of Congress, Rick Shiomi, playwright and artistic director of Mu Performing Arts and artist Lia Chang display “Coming to America”, Chang’s Fabric Book Art Installation in the Asian Reading Room of the Library of Congress in the Thomas Jefferson Building in Washington D.C. on July 27, 2011. Photo by Reme Grefalda

My grandmother, Lee Bak Huen, was just one of over 175, 000 Chinese detained on Angel Island, the largest island in the San Francisco Bay. Built in 1908 in the area known as China Cove, the Angel Island Immigration Station served as the major port of entry to the U.S. for immigrants from the Pacific Rim-including the Chinese, Japanese “picture brides”, Russians and Filipinos-between 1910 and 1940.

Over a million immigrants from around the world passed through Angel Island. Referred to as America’s “Ellis Island of the West,” this was a misnomer as Ellis island’s mission was admission and Angel Island’s mission was exclusion, specifically of Chinese immigrants, thanks to the discriminatory Exclusion Act of 1882, the Scott Act of 1888, and the Immigration Act of 1924. While on Ellis Island the vast majority of immigrants were allowed to go ashore immediately after processing, the Chinese passing through Angel Island were subjected to lengthy stays on the island as immigration officials looked for reasons to reject immigration petitions. These laws were repealed in 1943 at the onset of World War II, although the allocation of 105 immigrants per year was not abolished until 1965.

The outbreak of World War I cancelled the rush of European immigrants expected to arrive directly through the Panama Canal. By 1920, over 19,000 Japanese “picture brides” who married by proxy in Japan passed through with little delay and they preceded Chinese men down the pier to Angel Island.

Enticed by the tales of Game Sann or “Gold Mountain”, the first wave of Chinese came to California in search of their fortunes in 1848. Recruited by the mining companies with the promise of work, thousands more followed. Discriminatory legislation forced them out of the gold mines and the industrious Chinese took any work they might find for very little pay and regardless of how dangerous or demeaning it might be. This included laying tracks for the Central Pacific Railroad, reclaiming swamp land in the Sacramento delta and developing shrimp and abalone fisheries. Severe unemployment resulted in a depression during the 1870’s, and this led to protests against Asian immigrants whom other immigrants perceived were taking their jobs. Anti-Asian public sentiment was relentless and Congress began officially prohibiting Chinese from becoming United States citizens.

After the passage of the Exclusion Act of 1882, only merchants, students and teachers, government officials, visitors, minor aged children of the exempt and the Chinese who could prove citizenship were allowed into the country. Any Chinese claims for admission through Angel Island or Ellis Island were considered questionable until detailed interrogations could be conducted.

Click here for details on US Immigration Station Tours