Lia Chang: André De Shields in Mine Eyes Have Seen The Glory: From Douglass to Deliverance 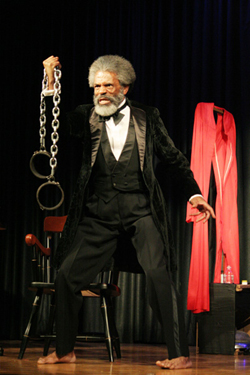 Channeling Frederick Douglass, Dr Martin Luther King, Jr. and Barack Obama in Mine Eyes Have Seen The Glory: From Douglass to Deliverance, award-winning Broadway star André De Shields was a powerful and mesmerizing tour-de-force for a standing room only audience on February 9, 2009.  The special performance, in celebration of Black History Month, was presented by Actors Equity Association’s EEO (Equal Employment Opportunity) Committee at SEIU District 1199, 310 West 43rd St in New York. Click on the arrow below for an excerpt of the performance. 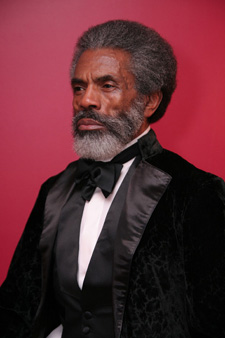 Mr. De Shields notes that the months of January and February 2009 host “a constellation of precedent setting historic events: Dr. Martin Luther King’s birthday (Jan 19); the inauguration of our first African-American President, Barack Obama (Jan 20); the Bicentennial of Abraham Lincoln (Feb 12) and the anniversary of Frederick Douglass’ birth. In my performance, I explore the life and achievements of the Great Emancipator, Frederick Douglass. Douglass began his life as a slave, through heroic efforts, became one of America’s most important and historically influential African American leaders.”

The multiple Tony Award nominee has appeared in numerous Broadway, Off Broadway and regional productions as well as television and film, and  returns to Broadway this season in Impressionism, the world premiere of a new play by Michael Jacobs, which stars Joan Allen and Jeremy Irons, and opens March 12. On Broadway, he appeared in the original casts of The Wiz, Ain’t Misbehavin’ (Emmy Award), Play On!, The Full Monty and Prymate. He also conceived, co-wrote, directed, and starred in Haarlem Nocturne. In 2007, he won the coveted OBIE Award for Sustained Excellence in Performance. His television credits include Cosby, Sex and the City, Law & Order, Lipstick Jungle and Life on Mars. He has served on Actors Equity’s Council since 1992.

7 comments on “Lia Chang: André De Shields in Mine Eyes Have Seen The Glory: From Douglass to Deliverance”